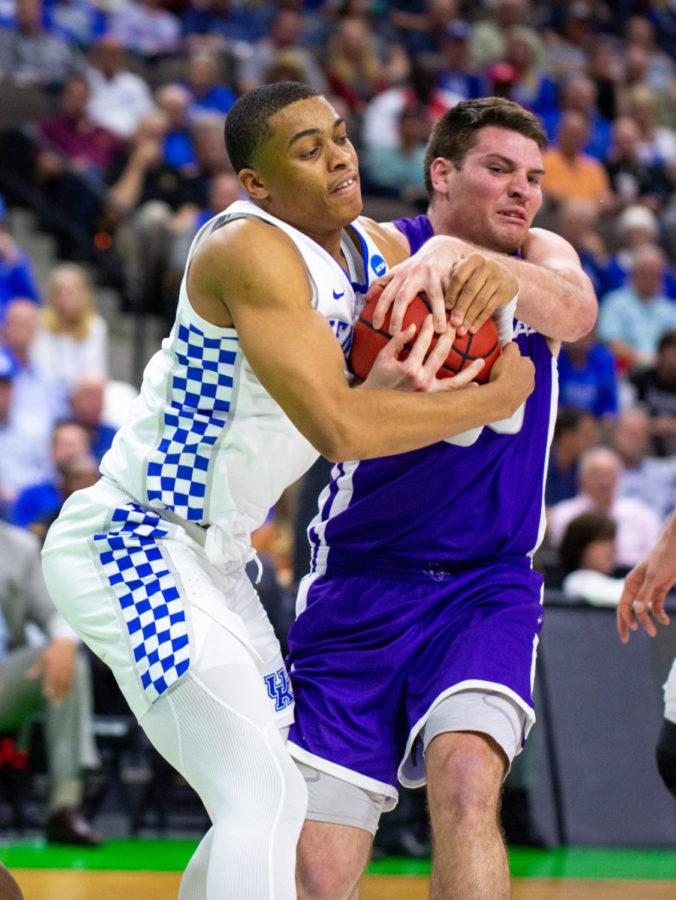 Kentucky freshman guard Keldon Johnson fights for possession during the game against Abilene Christian in the first round of the NCAA tournament on Thursday, Mar. 21, 2019, at VyStar Veterans Memorial Arena in Jacksonville, Florida. Kentucky won 79-44. Photo by Jordan Prather | Staff

The Kentucky Wildcats had no issues cruising past the Wildcats of Abilene Christian University in the first round of the NCAA Tournament, blowing out the Texas team 79-44. Their mojo? Out-hustling their opponent.

“Honestly, our mentality is just to outwork our opponents and just have more energy than them, and everything else will kind of take off from there,” sophomore Nick Richards said after UK’s win.

And the Cats did just that. In Thursday’s 40 minutes of play, Kentucky forced 10 turnovers and scored 15 points off of them, totaled 30 second-chance points, 10 fast break points and 14 offensive rebounds.

Before the final margin of 35 at the buzzer, Kentucky led by as many as 26 in the first half and kept the pedal to the floor. Freshman Keldon Johnson said he and his teammates didn’t have much of a choice but to do so.

“Regardless of the score, if we’re up 20, 30 or even if it’s a close game, if we miss an assignment he’s (John Calipari) going to be all over us,” Johnson said.

The Cats maintained their poise and aggressiveness on defense despite missing a key part of their lineup— P.J. Washington. The sophomore has a sprained foot and it was announced early Thursday that he wouldn’t be participating with his team against Abilene Christian. Although Kentucky went without its leader in both points (14.8) and rebounds (7.5) per game, the Cats managed. Freshman E.J. Montgomery thinks the way his team stepped up on defense helped the most with Washington being on the bench.

“We all came together on the defensive end to try to get stops, we all crashed the boards and just do the little things,” Montgomery said.

Freshman guard Immanuel Quickley said the aggression is all a part of UK’s game plan.

“Yeah, absolutely. Especially against a team that’s maybe not as talented as us, that’s what we know we’ve got to hang our hat on,” Quickley said. “Playing hard down the stretch, diving for balls, just trying to be on top of things like that.

Kentucky’s bigs, Montgomery, Richards and Travis, combined for 10 of UK’s 14 offensive rebounds, and Travis said it’s something that’s going to have to be executed moving forward in the NCAA Tournament.

“Yeah, that’s something that coach told us to do. If we’re not trying to get on the floor for loose balls, chasing after balls, getting hard rebounds,” Travis said. “A big part of our game is we want to push the ball in transition. So the faster we can play, the harder we can play, it’s just going to help us win games.”