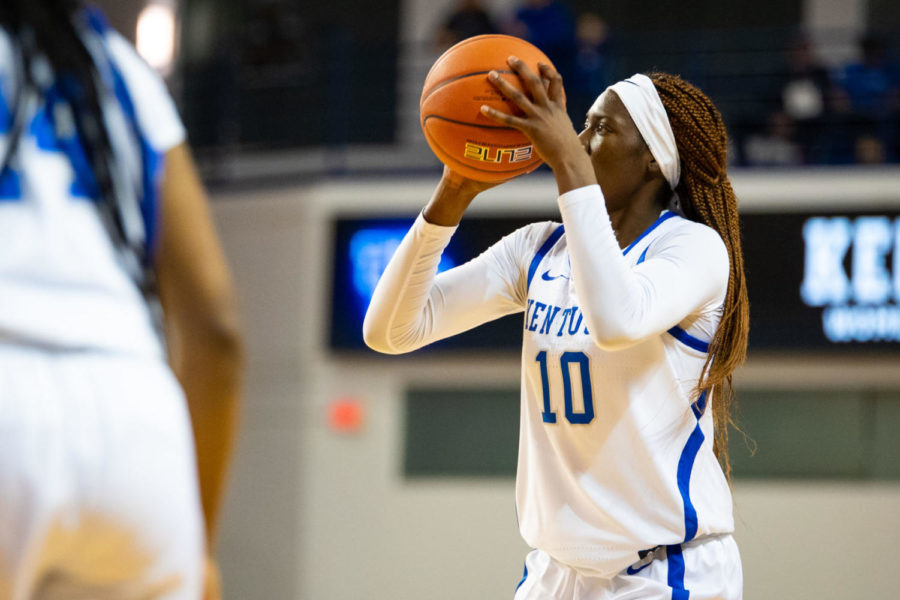 Freshman guard Rhyne Howard lines up a shot during the game against Texas A&M on Thursday, Feb. 28, 2019, at Memorial Coliseum in Lexington, Kentucky. Kentucky lost 62-55. Photo by Jordan Prather | Staff

After an emotional loss in senior guards Maci Morris and Taylor Murray’s final home game to Texas A&M, the Wildcats redeemed themselves with a 58-53 win on the road against Georgia. This was the No. 11 Wildcats’ final game of the regular season, and clinched the four seed for the Cats in the upcoming SEC tournament. This seeding will give the UK a double-bye.

Kentucky has had three players standout all season long. Seniors Morris and Murray along with freshman Rhyne Howard have led the Cats all season with at least one of them scoring in double digits every game. The final game of the season was different, though.

Howard led the three stars with just seven points on three of nine shooting from the floor. Morris had six points while shooting 2-of-10 and Murray had only three points on 1-of-2 shooting. The Cats’ leading scorers helped the team in other ways– Howard grabbed nine rebounds, two assists and a pair of steals. Morris had two steals and two assists. Murray rounded the trio out with six rebounds and six assists.

The Wildcats’ big three failing to produce their usual numbers would be enough for concern, but starting big KeKe McKinney did not play due to injury. Thankfully for Big Blue Nation, Kentucky has a deep pool of talent.

Tatyana Wyatt recorded a season high 17 points for Kentucky. Wyatt shot 6-of-10 from the field and 5-of-6 from the free throw line. Wyatt has now scored in double figures in three straight games for the first time this season.

Wyatt wasn’t the only Wildcat to step up against Georgia, Amanda Pascal started in McKinney’s place and made the most of her minutes. Pascal scored eight points, grabbed three rebounds, had two assists and stole the ball once in her 22 minutes of play. Jaida Roper came off the bench to score another eight for Kentucky. She also had four steals and three assists.

With the Wildcats struggling to make a shot, the game came down to a close fourth quarter fight. Kentucky entered the final quarter down 39-34. With the game on the line, the Wildcats played their best. UK mustered a 9-0 run to take a commanding 43-39 lead. Georgia cut the game to as close as one point, but the Cats never relinquished their lead. Kentucky outscored Georgia 23-14 in the fourth quarter.

Kentucky returns to the court on Friday against an opponent to be determined in the SEC Tournament in Greenville, South Carolina. Tipoff will be around 2:30 p.m. ET and can be seen on the SEC Network.