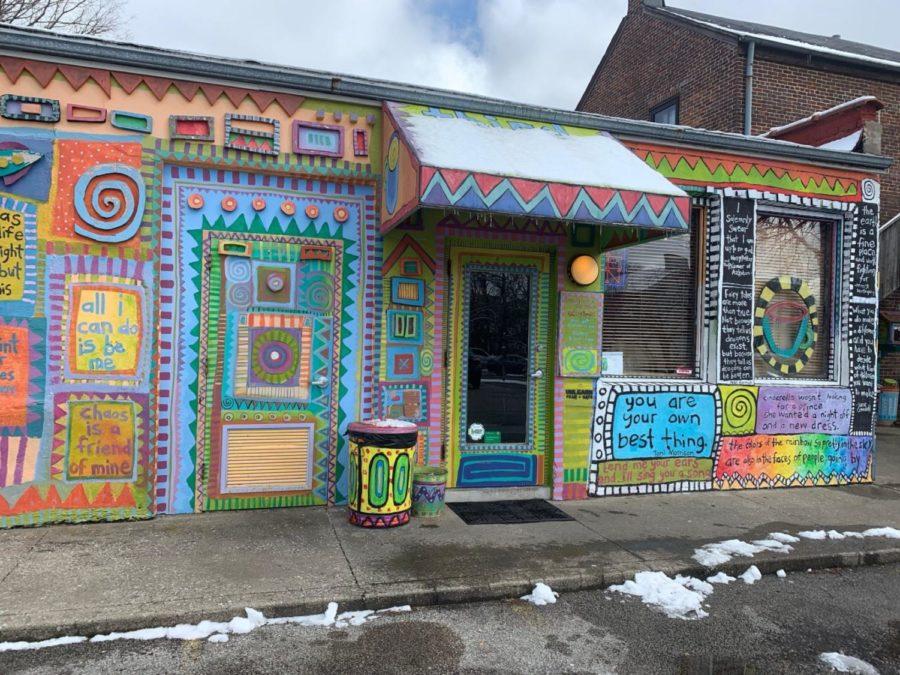 Third Street Stuff and Coffee is a hidden gem located in Lexington, Kentucky. Its unique features and atmosphere make it stand out like no other coffee shop in Lexington.

The business has been around since 1989 but was opened as a coffee shop in 2004.

Patrick Smith, a barista who has been working at Third Street Stuff for over five years, explained that the artwork in the shop is always evolving and developing and will continue to change over the coming years.

“It’s been a continuous work in progress. There’s some pictures from when it first opened and there was so much less stuff on the walls,” Smith said. “Things have just happened little bit by little bit. Something will show up on a random day and then it’ll stay.”

The shop is constantly changing and growing not only in its business but mostly in the artwork that makes the shop so special.

“There’s always a space that needs something more,” Gerhard said.

Half of the building used to be a shop where Gerhard would sell her artwork. However, the coffee shop side of the business took off and they had to minimize the retail aspect to make more space for their customers to have a comfortable environment to lounge in.

“The coffee shop was getting so busy and we didn’t want to move locations, and then it was like ‘where are all these people gonna go’ and now it’s almost like that room is always full, especially on weekends,” Smith said.

Another unique feature found at Third Street Stuff and Coffee is the Social Activism Library.

“Social activism is something I care about. I think we should always be working on improving the world as much as possible,” Gerhard said. “So books about current issues are free to borrow, you don’t have to sign them out or anything you just take them and maybe you’ll bring them back and maybe you won’t.”

Gerhard never imagined herself opening a coffee shop, but explained that it helped her connect with the people in Lexington’s community.

“This coffee shop brings people in, and I get to talk to them and meet them and hear what they’re doing, and it’s an amazing thing, and I would have never gotten to know the people in this community and all the things that they do without being in this space,” Gerhard said.

Gerhard is an artist who has gotten to express herself artistically to the community and hopes to break people out of their shell and show them how wonderful artistic expression can be.

“I want them to not be afraid of the exuberance here ’cause some people, they’re not sure whether it’s okay to be as colorful because mostly we have very neutral spaces, public spaces are really neutral, so we try to be extra friendly and just that no matter what kind of person you are, you don’t have to be afraid of this expression that’s kind of on the loud side,” Gerhard said.

Third Street Stuff and Coffee differs from other coffee shops in the fact that one person has been able to artistically express herself freely and really create something well-liked and conspicuous for the community.

“I think the most unique part is that the aesthetic is the vision of one person who has really devoted her life to art and creativity,” Smith said. “That it wasn’t thrown together as a marketing ploy or wasn’t thrown together to look cool it’s a living breathing work, creative work, which is a totally different thing, there’s not many of those.”