UK students show off their talent and talentlessness at SAB event 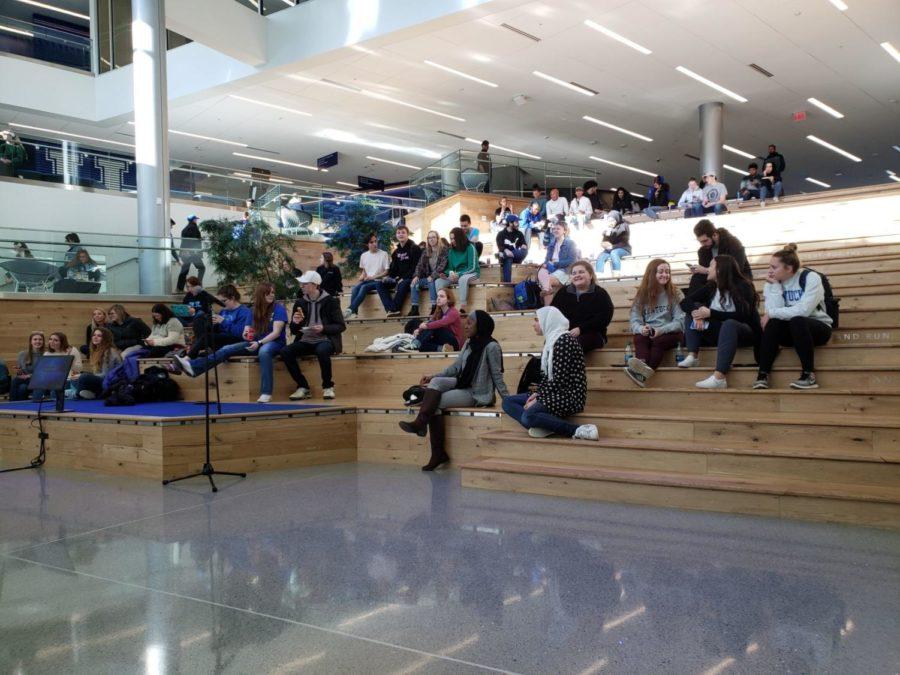 Students gathered around the student center's social staircase to enjoy the informal showcase.

On the evening of March 26, students who entered the student center by the social staircase were greeted with a wide variety of performances from other students, ranging from singing to juggling to even a dancing cow.

The Student Activities Board referred to it as the “Talentless Talent Show,” broadcasting that anyone can showcase their talent, regardless of skill, and ensured that they would not be judged for how “good” or “well put-together” the act was. The event’s flyer even stated, “Have bad jokes, mediocre singing or an even worse dance? Reserve your spot now… to show off your hidden talent, win prizes, and enjoy free food.”

At a certain point early in the event, students started coming to the base of the social staircase to perform without having reserved a spot, which allowed many students to participate who did not see the flyer or take the time to register. The coordinator of the event, Zach Gaubert, was giving away a free $5 voucher for Starbucks to anyone who participated as added motivation. In addition to this, SAB assembled several pizzas, plates of cookies and refreshments for students walking by who stopped to enjoy the show.

Among the acts, Tre Lyerly, a senior majoring in journalism, sang “Viva la Vida” by Coldplay using the karaoke machine SAB had set up at the event. He said that this song was something he had performed at other times throughout the past few years at various showcases and attributed his singing abilities to his time in chorus when he was a high schooler.

He noted the event’s importance.

“I think it’s important to make people feel welcomed,” he said, going on to explain that the event created a sort of pressure-free zone where anyone could come to the front and perform.

And perform the students did. The variety of acts had people applauding and shouting, “Encore!” and many students who stopped by had smiles on their faces at some point throughout the acts.

These acts did not fail to keep things interesting, as there were original poetry readings, dance numbers with groups, comedy bits, a Rubik’s Cube solving in twelve seconds, a breakup story, and much more. At one point, the Chick-fil-A cow mascot came out and danced to “Tequila,” and at another time, a duo referring to themselves as “Panda and Max” came to the base of the stairs and performed, with Panda playing and beatboxing on both a harmonica and a woodwind instrument, and Max spinning two orange spheres suspended from a connected string.

Yet another act, a performance by Rumana Khan, had the crowd cheering loudly all throughout. Khan sang an original song she wrote about her home country, appropriately titled, “Abu Dhabi,” and it consisted of both singing and rap sections.

After performing, she talked about how, when she wrote that piece, she was preparing for the first part of the USMLE, a medical exam of three to four “steps” that students of medicine wishing to gain licensure to practice in the United States must complete. Khan is in America on a temporary visa to observe doctors at the University of Kentucky’s hospital. She noted how she felt that while studying, a lot of information was flowing into her mind, but she had no way of releasing except through writing this song as a sort of creative outlet.

Khan gave a similar explanation to Lyerly in saying of the event itself, “You don’t feel the pressure to be awesome.”

Zach Gaubert, a sophomore studying finance and marketing and the Director of Concerts for SAB, discussed the formation of the event. In the fall 2018 semester, he had planned an event called “Study Sounds: Student Showcase,” where students could come to the social staircase and study a bit while others came and performed. At first, not many students appeared interested, but eventually, it turned into a sort of karaoke night that caused several students to stop by and participate.

This gave Gaubert and his advisor the idea for the Talentless Talent Show that allowed anyone who wanted to come and perform the opportunity to “without being judged,” as Gaubert described it. That was the main difference between the Talent Show and the regularly scheduled Open Mic night held every Tuesday evening in the Cats Den.

Gaubert added that, due to the high degree of success of the event, the soon-to-be new Director of Concerts, Sophia Marcolla, is planning another Talentless Talent Show for the coming fall semester.