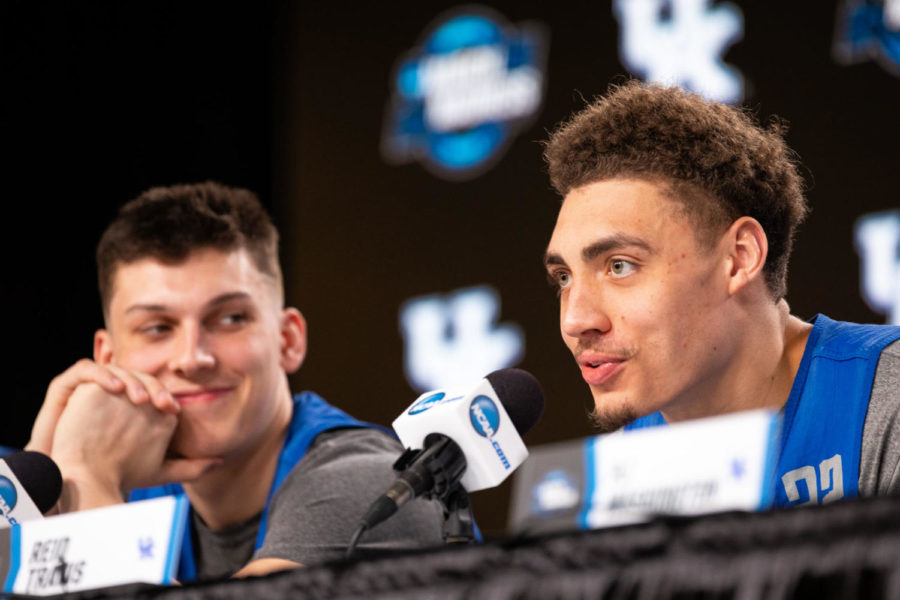 Kentucky graduate student forward Reid Travis talks to the media at a press conference on Saturday, March 30, 2019, at the Sprint Center in Kansas City, Missouri. Kentucky will take on Auburn in the Elite Eight of the NCAA tournament on Sunday, March 31. Photo by Jordan Prather | Staff

The Kentucky Wildcats have defeated Auburn twice already this year—will the third time be a charm when it counts the most in the teams’ Elite 8 matchup?

The first time the two teams played was back in mid-January– it was a close fight with the Cats pulling through 82-80 in what wasn’t their best showing, going just 3-for-9 from the three. Kentucky turned the tables the second time around, though. Due large in part to PJ Washington’s five three pointers, the Wildcats nailed 11 of them, good for 45 percent on the game. However, Calipari said in hindsight, none of that matters now.

“When I watched the game, it was close for awhile, and all of a sudden PJ went corner, PJ went top, PJ went wing, and all of a sudden we’re up 12. It kind of got away because the missed some shots..” Calipari said in a press conference Saturday. “..They’ve (Auburn) won 11 games in a row. The game has no bearing on this game, really doesn’t.”

Auburn has, indeed, been riding an 11-game win streak, and to keep it from reaching 12, the Cats’ three-point defense needs to be on point. Against North Carolina in the Sweet 16, the Tigers set a new program NCAA Tournament record by nailing 17 3-pointers, surpassing their 13 the game before against Kansas in the second round.

The Cats have been able to hold their own defensively. Kentucky’s first three NCAA Tournament opponents averaged just 52 points and in the final eight games of the regular season, the Cats held their opponents to 31.9 percent from the three.

With the two teams being pretty familiar with each other, Travis isn’t sure whether that’s a good or bad thing.

“For us, like you said, when you’ve played a team as much as we have with Auburn, it really comes down to fight and how hard we play. That’s been the message all season,” Travis said. “You can watch as much film and X’s and O’s as much as we want, but if the effort is not there, the fight is not there, it all doesn’t matter. It will be the same thing tomorrow. Bring fight and energy, and that should be what will help us win the game.”

Unfortunately, something both teams have in common is facing the adversity of players being injured. Auburn’s Chuma Okeke, 6-foot-8 sophomore forward, suffered a torn ACL in his team’s win over UNC and it was announced Saturday that he’ll have surgery on Tuesday.

“I mean Chuma, he doesn’t deserve that at all,” Auburn head coach Bruce Pearl said. “He worked so hard, spent so much time in the gym and making sure his body is right. It’s our jobs to pick him up, to lift him up, encourage him, and all we want to do at this point is go out there and play for him. We’re going to use it as motivation. Hopefully we can do this for our boy.”

Will Auburn be able to overcome the loss of Okeke and defeat its third blue-blood of the NCAA Tournament, or will the Cats survive and advance to their 18th Final Four in program history? Find out Sunday at 2:20 PM ET on CBS.