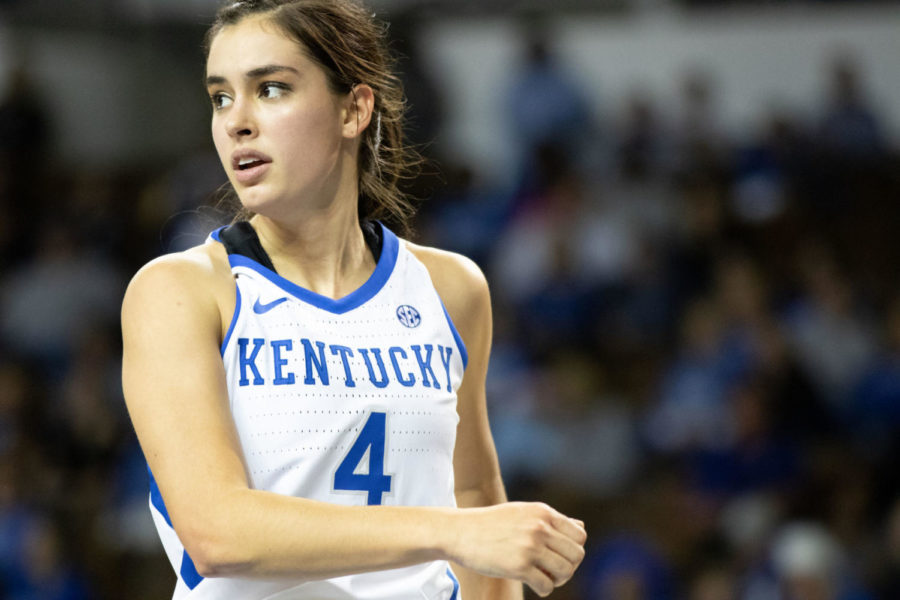 Senior guard Maci Morris runs down the court during the exhibition game against Lincoln Memorial University on Friday, Nov. 2, 2018 at Memorial Coliseum in Lexington, Kentucky. Photo by Michael Clubb | Staff

The Kentucky Wildcats have reached an end to their season after losing to the No. 3-seeded NC State, 72-57.

“I am really sad tonight for this season to end,” said head coach Matthew Mitchell. “Our players started back in June working extremely hard and have a great effort. Sad for this to end for our seniors, who are up here with me.”

Maci Morris, one of Kentucky’s seniors, ended her career as a Wildcat with an 18-point outing against the No. 10 team in the final AP polls.

In an emotional postgame interview, Morris said, “It has been a great blessing and I have met some of my best friends here. It has helped grow me into the woman I am. I have learned so many things on and off the court. I will be forever grateful for Kentucky.”

Taylor Murray, the Wildcats’ other starting senior, ended the game with four points, but shined in other areas. She recorded five rebounds, four assists and two steals.

“It has been a blessing to wear Kentucky across my chest,” Murray said.

Coach Mitchell addressed the loss, saying “I wish we would’ve left here with a win and made more shots but at the end of the night it was more about how tough NC State was and two great teams battling it out. They are just a great team and give them all the credit.”

Entering the final quarter of play, the Wildcats were only down 48-53, but as Mitchell said, NC State finished the game ‘tough.’ The Wolfpack outplayed Kentucky in the fourth, scoring the first seven points of the quarter to stretch their lead to 12 with seven minutes left.

Morris made all three of the Wildcats fourth quarter field goals, scoring eight of Kentucky’s final nine points of the season. Rhyne Howard scored the only other Wildcat point in the quarter.

Howard led the Wildcats’ with a 21-point performance. The freshman standout also had seven rebounds, three steals and an assist.

“My parents always told me that when you leave a place you should make it better than what it was when you got there. I hope we did that,” said Morris.

Mitchell answered the question saying, “The question about is Kentucky better than when those seniors found it… there is no question there, it absolutely is and will be for years to come.”