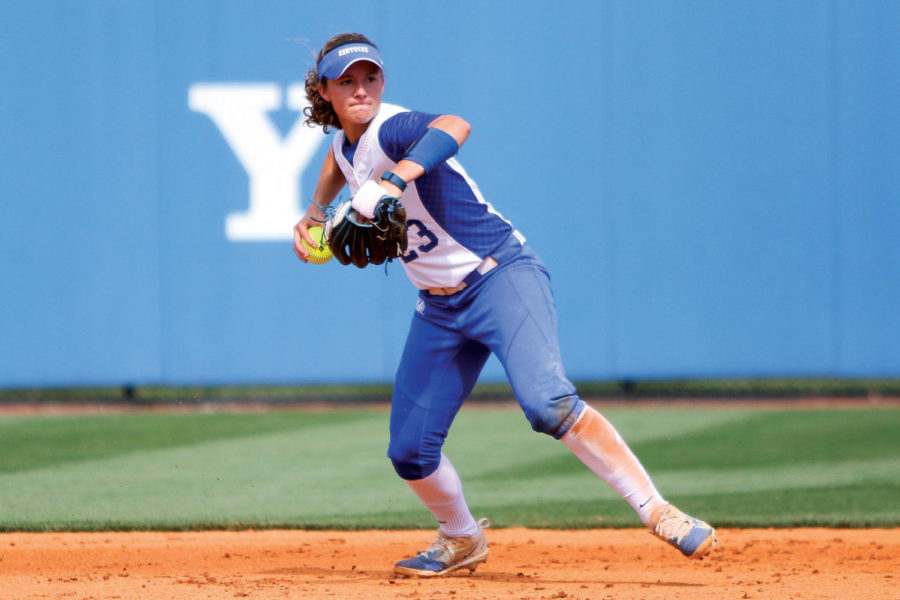 Kentucky Wildcats short stop Katie Reed throws the ball to first base during game two of the Lexington Regional at John Cropp Stadium on Friday, May 19, 2017 in Lexington, KY. Photo by Addison Coffey | Staff.

After watching its 12-game winning streak end Friday night, the No. 13 UK softball team is on a two-game losing streak after falling to the Missouri Tigers, 11-8, at home.

The Cats gave up the second-most runs they’ve given up in a game this season. UK has given up 10 or more runs in its last two games.

Cats’ pitching ace Meghan Schorman was able to get out of a bases-loaded jam in the first inning and leave the Tigers scoreless. That same inning, the Cats got on the board after third baseman Abbey Cheek hit an RBI single to make the score 1-0 Cats.

Like their opponents, the Cats would load the bases that same inning. But the Cats got an outcome opposite to the Tigers’.

The Tigers had the response, though. An inning later, Tiger outfielder Brooke Wilmes hit a three-run home run to cut the Cats’ lead to 5-3.

Grace Baalman entered the game that inning to replace Schorman. She provided damage control as the Tigers ended the inning with the bases loaded once more. Shortstop Katie Reed helped build off of Baalman’s momentum that inning. The Cats’ co-leader in hits this season hit a solo home run to increase the Cats lead to 6-3.

Things continued to seesaw after Tigers’ second baseman Kendyll Bailey hit a two-run home run to make it a one-run game in the third inning. Baalman then gave up a three-RBI double to third baseman Kim Wert, giving the Tigers their first lead of the day at 8-6. Larissa Spellman replaced Baalman and pitched the rest of the game. Baalman would eventually receive the loss.

“We’re definitely getting into a lot of hitter counts and when we are, we’re not coming up with the quality pitch,” UK head coach Rachel Lawson said.

UK had the bases loaded in the bottom of the third with two outs and failed to score. Missouri added salt to the Cats’ wounds the following inning after shortstop Jazmyn Rolin hit a two-RBI double to increase the Tigers’ lead, 10-6.

There was a bright spot for the Cats on the tough Saturday in the fourth inning. Cheek hit her 49th home run as a Wildcat, surpassing Brittany Cervantes for the most in team history.

“I knew coming into Kentucky four years ago I had a big role with scoring runs. I just focused on being the hitter Coach Lawson wants me to be,” Cheek said.

But Missouri would homer right back as designated player Geana Torres clubbed a one-run deep ball in the fifth inning to make it 11-7 Tigers. Catcher Jenny Schaper drove in a run for the Cats in the bottom up of the seventh, but that’s all the Cats had as a response.

UK will have a chance to avoid a sweep tomorrow at noon.