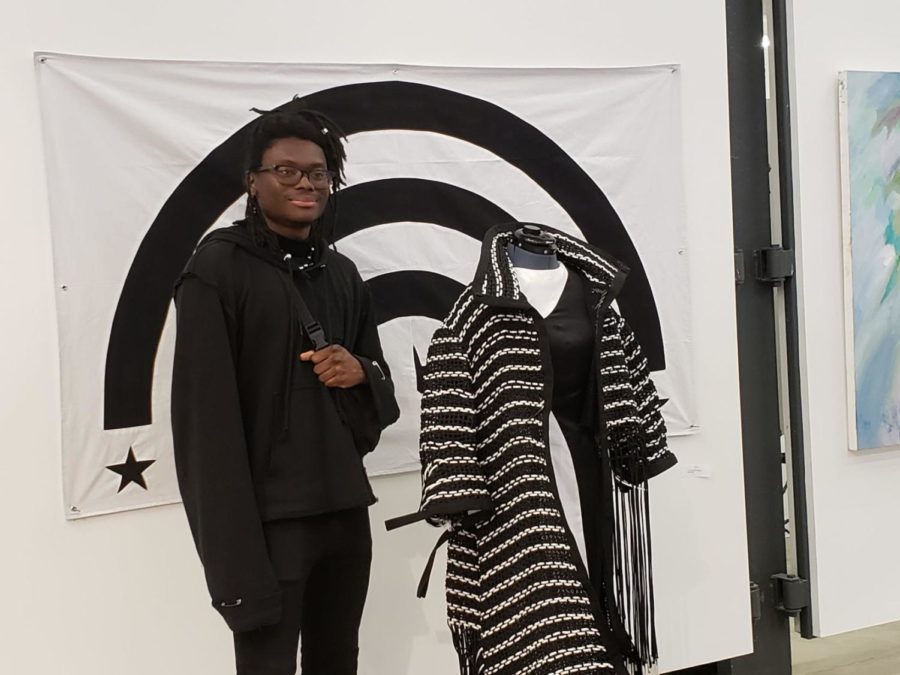 Isaac Couch poses with a coat he made. Couch won the Young Artists' Competition, which was hosted by the Student Activities Board at the SAVS building on March 20, 2019, in Lexington, Kentucky.

On the night of March 20, the UK Student Activities Board hosted its seventh annual Young Artists’ Competition at the School of Art and Visual Studies.

The event was created as a way to showcase works of art completed by students who were not necessarily in an arts-related major, and at this particular event, 15 students had their works displayed. In addition to public reception, the competition allowed students the chance to win a scholarship “shopping spree” to a Michael’s store, where they could buy more art supplies to further their passions.

There was a variety of artwork on display, with several different media used, including photography, digital art, pen drawings, marker on canvas, cloth and even clothing. The competition portion of the event was carried out in part by a panel of judges, who scored the pieces digitally, and also by two “audience favorite” votes, where reception attendees could vote for their favorite artworks.

The winner, Isaac Couch, as selected by the judge panel of Crystal Gregory, Becky Alley, and Garrett Hansen, was given a $500 scholarship, and the two audience vote winners, Sydney Janda and Brianna Armstrong, received a $300 scholarship each.

Katie Creech, Director of Cultural Arts within the Student Activities Board, oversaw the event. She explained the process students had to complete to be given the chance to have their works displayed in the competition.

The application was made available online through BBNvolved, and each entrant had to submit a portfolio of a maximum of 15 artworks, an artist’s statement, some basic information, and a brief statement explaining why they deserve the scholarship money. From there, the top 15 students were selected for display.

Creech also shared the importance of running events such as this.

“Art is important for the creator; it’s a way of expressing their passions, [such as] political, religious, social, etc.,” she said.

Creech discussed how it is equally important to show students these artworks, as it shows them that not just art students can create. According to Creech, art is mentally stimulating, and in allowing other students and the public to come see the students’ works, they could become interested in seeing more art exhibits following the competition. Creech is a junior studying both Arts Administration and Art Studio, and she has been serving as the Student Activities Board director of cultural arts for the past year.

One of the audience favorite winners, Sydney Janda, spoke of her journey to reach the point at which she started working with photography as her medium of choice for expression. Janda started producing drawings and paintings and sold them around the age of 12, but as she got to high school, she became bored with those media. She turned to photography when her parents bought her a camera, and she has been photographing since 2015, even starting her own business in 2017.

Janda mainly focuses on senior portraits and family pictures in her business, in addition to her favorite subject, equine pictures. Her three entries consisted of various photographs of horses, and she attributes her love of the subject to having ridden horses her entire life.

“It really expresses ideas that you don’t get to see, and it really expresses who [the artist is] as a person,” Janda, a freshman studying digital media and design, said of her work in the Young Artists Competition.

Lauren Campbell, another student artists and a sophomore studying both political science and media arts and studies, said she found out about the competition through one of the posters around campus, and decided that she would enter the competition with a set of her works consisting of marker drawings on canvas. Campbell started doodling on index cards in her junior year of high school, and eventually, her friends suggested canvas as another option for her to create her works on.

“It’s wonderful to see and collaborate with artists as a non-art student,” Campbell said.

Campbell’s family friend, Laura Goble, attended the event with her.

“It’s cool that they had a display that brought the community in,” she remarked, adding that when Campbell told Goble she was going to be in the competition, Goble said, “I am there, baby!”

The Student Activities Board hosts the Young Artists’ Competition annually in the spring, and they also host a variety of other events on campus.