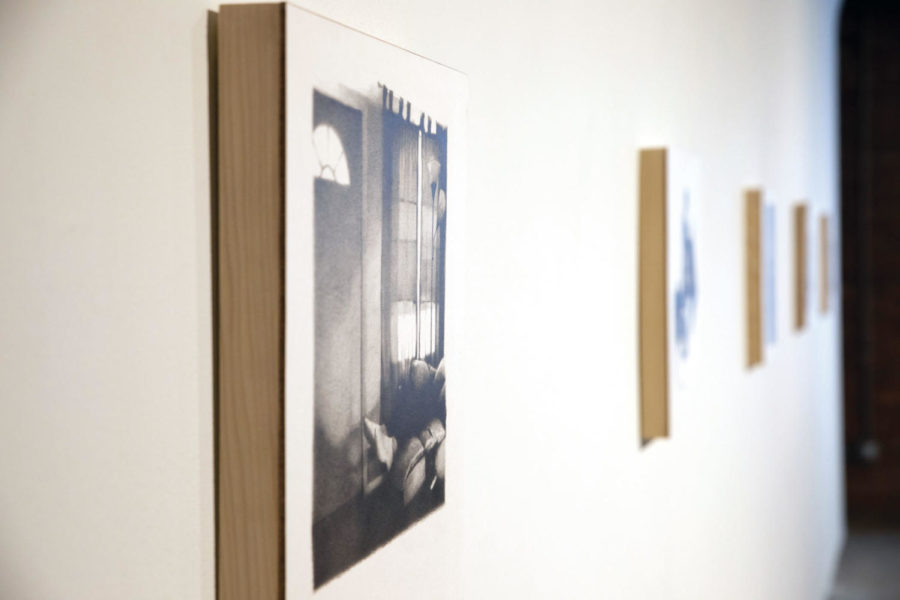 An image made from graphite pencil on display at artist Sean Lyman's "Define" exhibit at the Bolivar Art Gallery on Wednesday, Feb. 27, 2019, in Lexington, Kentucky. Photo by Michael Clubb | Staff

For many college students, mechanical pencils are just an obligatory writing utensil for note taking, resorted to only in classes where professors have a no-laptops rule. For artist Sean Lyman, they are the tool which have allowed him to create his “Define” collection, now featured in UK’s Bolivar Art Gallery.

Lyman uses six graphite mechanical pencils varying F through 4B lead harness, allowing him to create images like those featured in Define, which he has been working on for the past year.

“The use of graphite allows my work to be in a gray scale and quiet by the nature of the medium and how it is applied,” Lyman said.

The inspiration for his drawings comes from his daily encounters with the places and things around him. Lyman said that he takes pictures on his phone and has created a database of images that he can pull from, which eventually become the images portrayed in his collection.

“The content of the images vary in significance but all fall in the realm of the mundane or ordinary,” Lyman said. “I am counting on the familiarity of the place or object to help the viewer pause to consider where they might have seen that space or thing before.”

The simplicity of the objects is a unifying theme across Lyman’s work, and he said it is not a linear narrative, but a transferable one throughout the space and the work.

“The drawings are simply of spaces and objects that have no particular relationship to one another. But, as you engage them in the space, they create the possibility for the viewer to create a narrative,” he said.

The title of the exhibit, Define, examines how spaces and objects that are frequently overlooked but still serve specific roles are used in particular spaces.

“The things that we surround ourselves with create an insight in to who we are. The objects in the exhibition placed together, in this space, create meaning,” Lyman said.

Lyman described the body of work as a moment in time. This particular arrangement of the work is the first time the pieces have been arranged as such.

“I do not see this moment as one that is fixed … I see it in a similar way that we think of memories or recollections. None of these are permanent,” he said.

Define opened on Feb. 15 as part of the School of School of Art and Visual Studies Visiting Art Series. In addition to being featured here, Lyman’s work has been exhibited regionally, nationally and internationally.

Lyman is an associate professor at Missouri State University, where he teaches painting and drawing. It is during breaks from teaching in the summer and winter that Lyman said he is most productive on his own work.

Lyman described his creative process as a work environment, where he likes to listen to old podcasts or play old movies while he draws, and chooses to block six hours of time to work.

“Some days are more productive than others, but that extended time with the work helps me see connections that I otherwise wouldn’t,” he said.

Lyman credits this artistic process as being the way he understands the world around him.

“Drawing allows me to tell a story that I am unable to in any other way,” Lyman said.

Define will be on display at the Bolivar Art Gallery until March 15, open to the public for free admission. Daily hours of operation are listed on the gallery’s website.