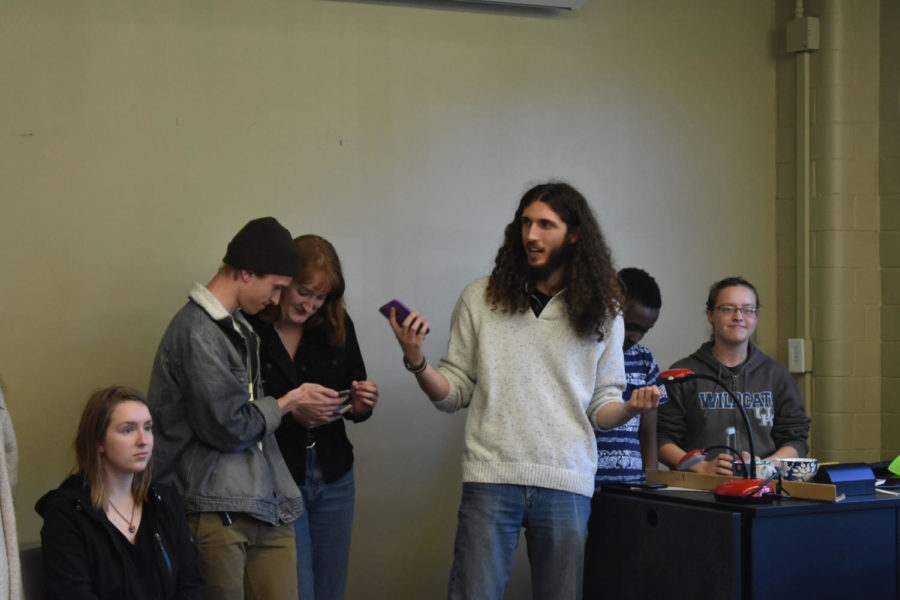 Beau Revlett addresses the gathering in preparation for SSTOP Hunger's announcement of an upcoming hunger strike in support of the basic needs campaign during SSTOP's day of free meals on Wednesday, March 27, 2019 in Lexington, Kentucky. Photo by Natalie Parks | Staff

SSTOP Hunger announced Wednesday evening that some of its members would be going on a hunger strike as the next step in a plan to pressure UK to establish a Basic Needs Center.

The announcement came at the end of a day of free food, an event hosted in part by SSTOP. At the free dinner, the organization said six of its members will not eat anything until its demands are met, seven will only eat one meal a day and the remaining eight will participate by cutting their food intake in other ways.

The hunger strike and the day of free food are both a part of SSTOP’s Basic Needs Campaign. The campaign has been ongoing since a 2017 survey contended that 43 percent of students on campus are food insecure and 8 percent are housing insecure. The survey interviewed 2,000 UK students.

University officials have publicly doubted the survey’s findings. UK spokesperson Jay Blanton told the Kernel in previous statements that the survey lacked a “representative sample of the student population.”

While SSTOP members say there has been lots of support from the community, they describe a resistance from the university. They’ve held meetings with UK administrators and organized rallies and student assemblies, efforts which they say have not been taken seriously.

SSTOP members believe a hunger strike will change this.

“It is time for UK administrators to acknowledge the magnitude of the problem we face and act in proportion,” said Lidya Azad, one of the six members who won’t be eating during the strike.

The organization sees the hunger strike as a way to make a difference not only on UK’s campus but at other universities as well.

SSTOP Hunger members said the privatization of UK housing and food are to blame for the high cost of living and eating on campus. According to Beau Revlett, an organizer for SSTOP, this is why events like the day of free food are important for students.

“The more opportunities they have to get food and also the more people that know that this is a need on campus, the better,” Revlett said.

The day of free food was organized by Big Blue Pantry, Campus Kitchen and SSTOP Hunger, with the food being provided by Big Blue Harvest, Farm to Fork and the Basic Needs Campaign. The event attracted an unexpectedly high number of attendees.

“We had tons of new people,” said SSTOP organizer Desiree Gipson of the event’s turnout.

SSTOP is inviting students who want to participate to join the hunger strike. They are also encouraging students to call the university in support of the Basic Needs Campaign.