‘Chaos Corner’ is no more; State Street is the place to be after a win 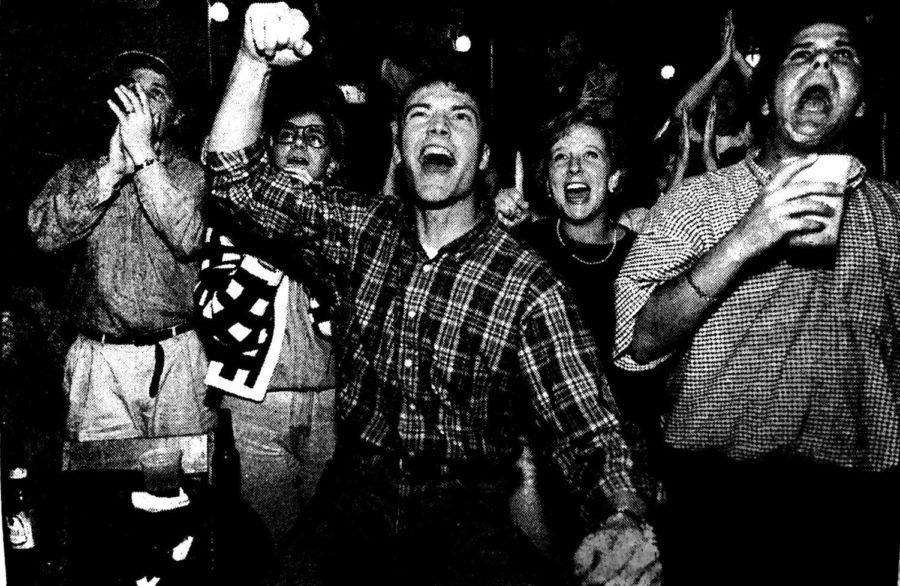 Kentucky fans celebrate at the corner of Woodland and Euclid on March 30, 1996, after Kentucky beat the University of Massachusetts 81-74, winning UK's sixth national championship.

The streets around campus flowed freely with rivers of alcohol, crazed revelers ignited the leaking gas from a flipped-over news van, daredevils scaled poles and one guy pushed a beer keg around in a shopping cart.

This was not the apocalypse. This was not State Street. It was the only intersection that mattered, just minutes after UK captured its sixth NCAA basketball championship in 1996.

The intersection of Woodland and Euclid was the place to be after UK basketball captured two championships in the late 90s, the Kernel’s coverage of the mayhem shows. Minutes after the final buzzer, jubilant and often inebriated UK fans would flood the intersection from the plethora of bars, fraternity houses and the nearby South Campus dorms that populated the surrounding neighborhood in those years.

These days, the intersection is barely on the police’s radar.

“Euclid and Woodland was the big one when I was going to school. ’96 and ’98, I was (in Lexington) for both of those and that was the spot to be at,” said Commander Brian Maynard of the Lexington Police in September. “That has changed. This past year, we didn’t even staff anybody at that location.”

Sometime in the years between 2010 and 2012, State Street and the surrounding neighborhoods, quickly became the unquestioned main gathering place for large post-game celebrations, Maynard said.

“That just seems to be traditionally where it has moved to,” Maynard said.

Rachel Aretakis, the Kernel’s News Editor in 2012 when UK won its most recent basketball championship, said that the newspaper had sent reporters to the Woodland and Euclid area, but decided to center around State Street as it appeared to be the rowdiest and most populated.

When UK defeated Louisville in the 2012 Final Four, Aretakis was on State Street to report and take in the mayhem first-hand.

Multiple cars were flipped, one was lit on fire and some fans tried to defend their vehicles, she said. Red cars were at times specifically targeted.

According to news coverage from the time, fireworks went off just after the game, burning couches littered the streets and there were multiple injuries reported from thrown beer bottles.

UK spokesperson Kathy Johnson told the Kernel then that 39 fires had been reported before midnight.

In recent years, police, having learned from past incidents and now corral any stray couches days before tip-off and prevent cars from parking around the State Street area on game days.

On March 31, 1998, the Kernel’s front-page headline read “Chaos Corner,” and below it sits a black and white photo of frenzied, jubilant, beer-toting fans.

“This is my first time out here, and I’ve never seen anything like it,” one UK student at Euclid and Woodland told the Kernel in 1998 after UK’s seventh basketball championship win. “This is P-H-A-T phat; it’s the phattest party I’ve ever seen.”

A version of this article originally ran in the Sept. 17, 2018, print edition.