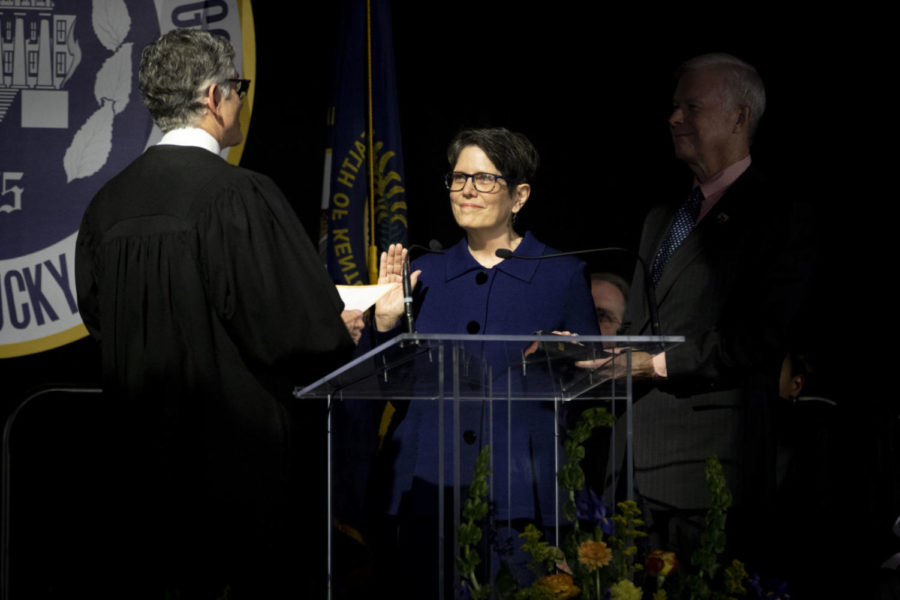 From UK nursing student to Lexington’s third female mayor, Linda Gorton has had quite a political journey.

Gorton, a College of Nursing graduate, was sworn in as Lexington’s newest mayor in January. She was inaugurated in UK’s Gatton Student Center after defeating her opponent, Ronnie Bastin, in November 2018.

Linda Gorton first came to UK from the small town of Circleville, Ohio. There, her father sold tractors and her mother worked in a physician’s office. She began attending nursing school and later graduated from UK’s College of Nursing in 1971.

“It was the ’60s, so my one rebellion in life was that I didn’t want to go to Ohio State like the rest of my family,” Gorton said. “But I wanted some place that had a good college of nursing, and UK just fit the bill.”

After graduating from UK, Gorton married her husband, Charles— also a UK graduate. Charles graduated with a degree in management.

A month after Linda’s graduation, the couple moved to Germany, where she worked as a nurse. Charles was stationed there as he was serving in the U.S. Army. She moved around quite a bit before returning back to Lexington.

Though she did not major in anything related to politics during her time at UK, her draw to politics eventually grew after spending some time in Lexington after her years abroad.

After working a number of years as a nurse, a city council position began to appeal to her. When Isabel Yates, the then-council woman for her district announced that she wasn’t running again, Gorton saw an opportunity.

Before serving as mayor, she was vice mayor for four years and served on the Lexington-Fayette Urban County Council representing the Fourth District for 16 years.

“Lexington has always been open to women that the voters thought would do a good job,” Gorton said.

While she is not Lexington’s first female mayor, Gorton has come to power at an interesting time in politics.

This past election, a record number of women were seeking political office all around the country. Gorton was one of them, and she succeeded in obtaining her desired position in the government.

“There has been a trend over the years in terms of female council members,” Gorton said. “There have been more and more women interested in that. And Lexington has a really strong history of electing good women. I’m the third female mayor, and to kind of put it in perspective, Louisville has never had a female mayor.”

For those attending UK now who want to potentially run for elected office post-graduation, Gorton advises them to stay up-to-date on issues in the community and to keep the citizens first.

“If people are interested in running for office, I think it is a wonderful opportunity to serve the community in a really positive way,” she said. “You can get so many good things done. I would encourage students who are interested in that to learn about the issues in Lexington, and in particular, in their council district, and understand what kinds of things the citizens want.”