Cats clinch series against Canisius in game one of Saturday doubleheader 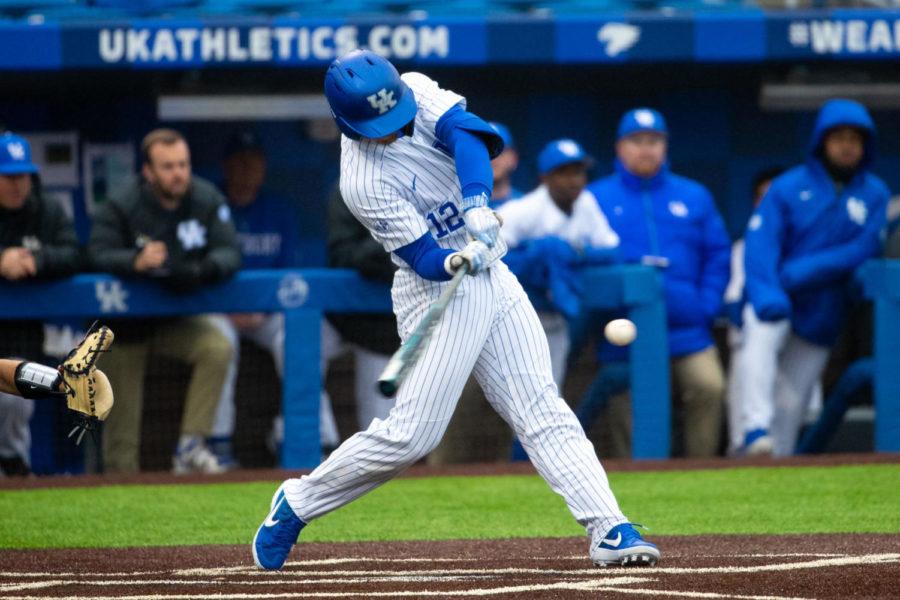 Kentucky senior Ryan Shinn swings at a ball during the game against Canisius College on Friday, Mar. 1, 2019, at Kentucky Proud Park in Lexington, Kentucky. Photo by Jordan Prather | Staff

After blowing out the Canisius College Golden Griffins 10-2 on Friday, the Kentucky Wildcats opened their Saturday doubleheader against the same team with a shattering 12-3.

Field defense shone through for Kentucky throughout as the infield brought in two double plays in the third and sixth innings, and the outfield caught seven fly balls. The Cats also pulled together to shut down a stolen base attempt in the fourth.

Senior Ryan Shinn reached base for the ninth game in a row after leading off with a single-run homer in the third. Kentucky left two Cats on base that inning and failed to reach home again until the fourth, when a Griffins error allowed a stolen home plate from senior Alex Rodriguez. Daniel stole home shortly after to push the Cats up 5-0 runs.

Starting pitcher Dillon Marsh successfully retired 15 hitters and struck out 6 in the first 5 innings. After walking the lead-off and allowing 2 consecutive hits, the second one an RBI, he was relieved in the sixth. Freshman Cole Daniels allowed a second RBI before striking out the Griffins’ last hitter immediately after relieving Marsh.

Although Canisius gained a little momentum from their two runs in the sixth, Reed netted his third home run of the season, allowing him and a stumbling pinch runner Cam Hill to tie the sixth.

The Griffins scored an unearned run in eighth after a hit, error and wild pitch as Kentucky’s defense faltered. Although the continued to advance in bases multiple times, they were eventually shut out for the remainder of the game.

The Cats touched home three more times in the eighth to propel them past the Cats. Kessler and Reed scored off a single RBI from Lewis, and junior Elliott Curtis followed from freshman Austin Shultz.

Kentucky clinched the series after giving the Griffins a three-up, three-down run in the top of the ninth.

UK Baseball will no longer play on Sunday, March 3 due to inclement weather. Their next game immediately follows the noon game at Kentucky Proud Park as apart of Kentucky’s first doubleheader.