Cats drop second consecutive game, give up series against A&M 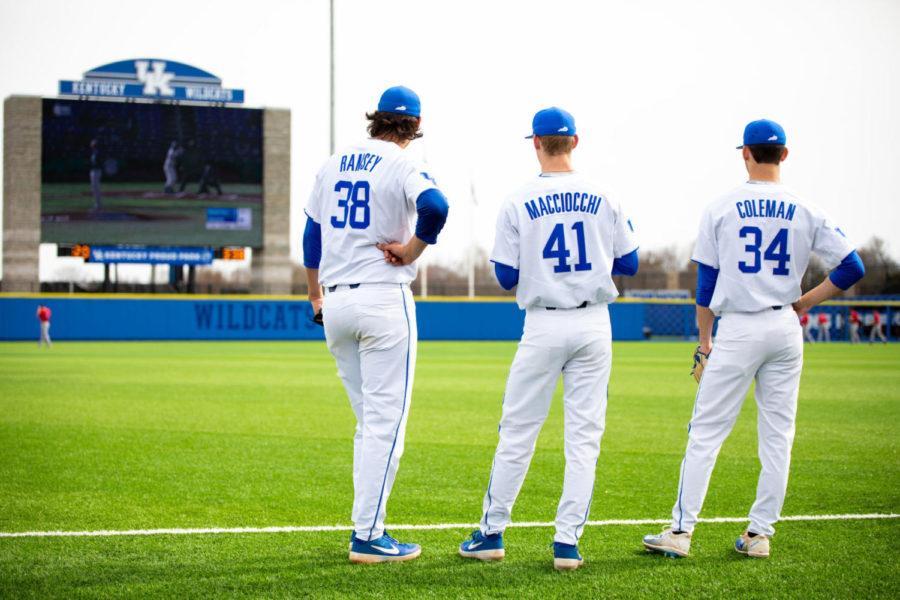 The Kentucky Wildcats lost their Saturday game of the series against the No. 13 Texas A&M Aggies 9-3. Coming after their Friday loss against the same team, the Cats drop the series and continue their season 0-5 in conference play.

“It’s a tough conference to play in,” said head coach Nick Mingione. “It’s really, really tough. We saw it in Baton Rouge and we’re going to continue to see it here. I’m proud of our guys for fighting through the weekend, I really am. But it hasn’t been enough for us yet.”

Opening the game with a triple on the first pitch, the Aggies came into the game high off Friday’s comeback win. Both teams had an RBI in the first to keep the score tied after the first, but A&M managed to continue scoring when the Cats could not find their feet.

Starting pitcher Grant Macciocchi faced his second loss despite being able to retire several Aggie batters in the five innings he pitched. This came after allowing 10 total hits through his pitching reign.

“[Macciocchi] is a great pitcher, and we’re happy to have him start on Saturdays,” Mingione said. “He fought for it. He deserves to have a better night than he did. It wasn’t a bad job by him at all.”

The Aggies rang in another RBI in the second, assisted by a UK fielding error on which the Aggies were allowed to reach base. Continuing their scoring run in the fourth, the opposing team netted a two-run homer after racking up two outs on the board to hold the Cats down.

“It’s hard to see a home run in our park from the other team,” Mingione said. “I know… on the guys, it’s pretty tough.”

Another two-run homer from the Aggies occurred early on in the fifth inning, immediately following an RBI double. Leading the Cats 7-1 more than halfway through the game, A&M kept the edge they needed to claim the entire series.

Aggies pitching was extremely tough on Kentucky, as their bullpen struck out 17 Wildcats and allowed only five hits in all nine innings of play.

The seventh inning lead-off hitter for the Aggies hit the team’s third home run of the day on his second pitch. Junior Elliott Curtis hit Kentucky’s first home run to respond, and an unearned run from senior Ryan Shinn reaching base on A&M’s error pushed the Cats up to three runs overall.

Touching one base at a time, the Aggies scored the final run of the night late in the top of the eighth to finalize Kentucky’s loss in the series. The Wildcats are now 14-9 overall.

“All we can hope for is to not get swept tomorrow,” Mingione said.

The Cats and Aggies will return to Kentucky Proud Park on Sunday, where they will play the final game of the series. First pitch is at 1 p.m.