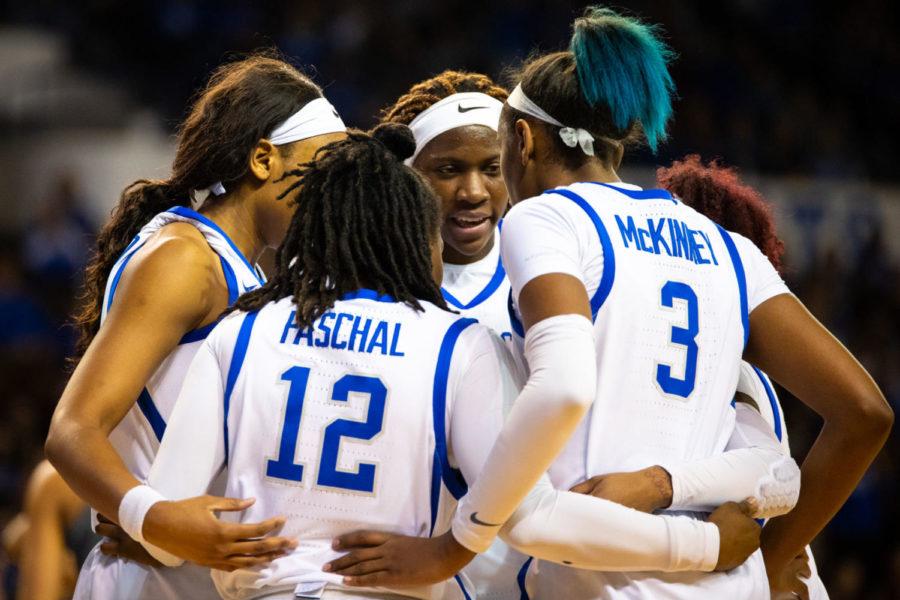 The Kentucky women's basketball team huddles up during the game against Texas A&M on Thursday, Feb. 28, 2019, at Memorial Coliseum in Lexington, Kentucky. Kentucky lost 62-55. Photo by Jordan Prather | Staff

The Kentucky Wildcats enjoyed a successful regular season, ending as the No. 13 team in the nation and the fourth seed in the SEC Tournament. The fourth seed gave the Wildcats a double bye, but Kentucky’s SEC Tournament run was cut short by a 70-68 overtime loss to Missouri.

Starting big KeKe McKinney missed her second straight game. McKinney’s height and rebounding ability was sorely missed by a smaller Kentucky team as the Tigers out-rebounded the Cats 40 to 34 in total.

The game got away from Kentucky quickly. Missouri opened the game with a 7-0 run while holding Kentucky scoreless for the first three-and-a-half minutes of the game. The Tigers held the Wildcats to 7.7 percent shooting in the first quarter and led 15-7 by the start of the second quarter.

The Wildcats were able to tie the game late in the second quarter, but Mizzou took complete control shortly after. The Tigers answered with a quick 10-2 run to close out the first half of the game.

Missouri opened the second half with a fast four-point run to earn a 12-point lead, its largest lead of the contest. Kentucky fought its way back into the game with a 13-6 run that brought the game to 37-32 with just under six minutes remaining in the third quarter. The teams traded small runs until a series of UK free throws cut the lead to only three points. A last second Missouri three ended the quarter with a score of 46-40.

A determined Wildcats squad opened the final quarter with some of their best play. UK went on a 7-1 run to tie the game, highlighted by a Rhyne Howard three-point play. With exactly six minutes remaining, the Wildcats took their first lead of the night on a Tatyana Wyatt basket. Kentucky fought tooth and nail to retain the lead and was up by one point in the final minute of play. With 21 seconds remaining and Kentucky up by one point, the game’s leading scorer, Missouri’s Sophie Cunningham went to the free throw line for two shots. Cunningham missed the first shot but tied the game with her second. Head Coach Matthew Mitchell went to Howard for the final shot, but she missed, sending the game to overtime.

The first half of overtime was Kentucky’s, but Missouri finished the game with their best play. With one minute left, Kentucky had yet to trail in overtime. With 55 seconds left, a Cunningham layup sparked a six-point Mizzou run to lead 67-63 with 20 seconds left in the game. The teams then traded pairs of free throws to put Kentucky down 69-65 with 12 seconds remaining. Wyatt was able to convert a three-point play, bringing the game to just one point, before Cunningham was sent back to the line for crucial free throws with six seconds left. The senior guard split the free throws, missing her first. Howard was then given a second chance to end the game with a last second three, but she missed.

Cunningham led all scorers with 29-points. Howard lead the Wildcats with 25 of her own points.

The Wildcats will find out their NCAA tournament destination on Monday, March 18.