UK softball falls to the Tigers 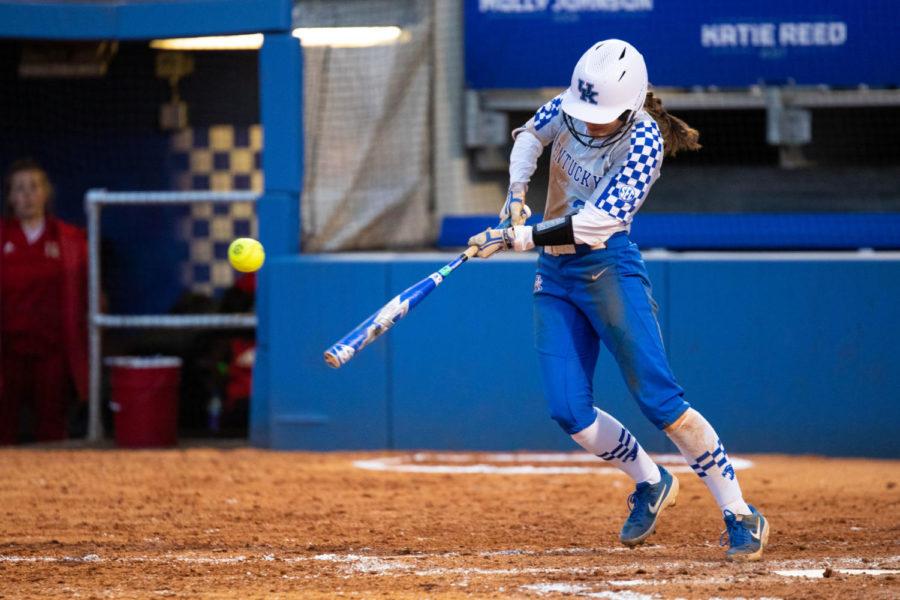 The no. 13 ranked Kentucky Wildcat softball team went head to head  with the Missouri Tigers at John Cropp Stadium.  The Wildcats fell to the Tigers 10-8, ending their 12-game winning streak.

“Kentucky softball is just like we always focused on when we had runners on base, we need to string hits together and score them,” Cheek said.

Kentucky remained scoreless in the first inning, while Missouri was able to gain two runs after their third baseman Kim Wert hit a homer, allowing left fielder Regan Nash to run into home.

The Wildcats were able to benefit offensively by adding three runs to the board in the second inning. Lauren Johnson hit a grand slam, which allowed short stop Katie Reed and left fielder Bailey Vick to also add runs to the board.

In the third inning, Missouri was able to add two runs on to the board. The Wildcats added three runs off of four hits.

In the fourth inning, Missouri was unable to score any runs while Kentucky added two to the board off of hits from second baseman Alex Martens and short stop Katie Reed.

The Kentucky Wildcats had a strong four innings from the bottom of the order.

“…I think anytime your strong in the bottom of the order you can turn it over and that’s obviously key to a lot of things going on,” Lawson said.

In the 5thinning, Missouri was able to gain back some offensive momentum, producing four runs off of four hits. During the inning, pitcher Grace Baalman stepped in to replace Autumn Humes on the mound.

Both teams remained scoreless in the sixth and seventh innings, causing the game to go into extra innings.

In the final inning, Kentucky replaced Baalman with Meghan Schorman, and Missouri was able to add two runs to the board. Schorman was unable to avoid her pitch to Tigers right fielder Brooke Wilmes, causing a double play. The Wildcats were unable to come back, resulting in a Tigers win.

Lawson spoke highly of freshman Meghan Schorman after she had three consecutive strike-outs.

“She also is super talented. She you know she can move the ball, she can change speeds, she can do a lot of things so I’ve been really pleased how she been able to come into big situations and shut things down,” Lawson said.

The Wildcats are hoping to improve before the next games in the series.

“…I think number one we’ve got do better on the mound. We got to get ahead in count. We were pitching behind count a lot. And then you know when there’s a two-strike situation we need to come up with a key pitch and then offensively we need to stay within our approach and our game plan and not let the situation dictate what we do,” Lawson said.

The two teams will meet at John Cropp Stadium for game two of the series on Saturday at 2 p.m. and will be broadcast on SEC Network Plus.