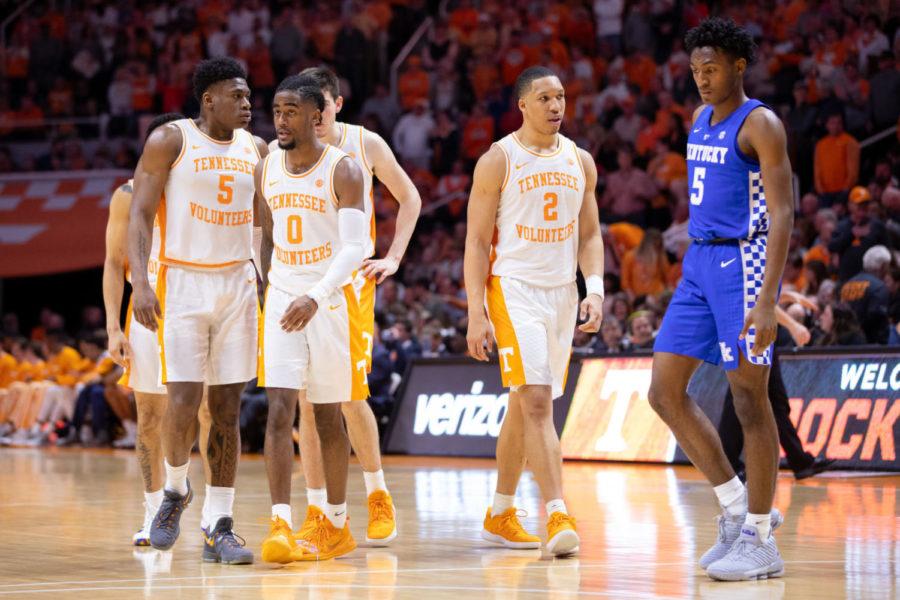 Two weeks ago, the Tennessee Volunteer basketball team came into Rupp Arena as the No. 1 team in the country. They were dominated by Kentucky, and decided they’d return the favor against Kentucky at home.

The Cats had one of their worst offensive performances of the season, scoring only 52 points in their 71-52 loss. UK shot only 32% from the field.

The first few possessions of the game were the only ones that went right for the Cats. Star forward P.J. Washington opened the game with a made free throw, and a three plus a layup gave UK an early 6-0 lead. A 7-0 run from Tennessee gave them the first lead of the game. The two teams went back and forth for a few minutes, but the Cats never led after the 12:43 mark in the first half.

The visiting Cats also weren’t helping themselves out in the game, as every forward seemed to come down with foul trouble in the first half. Washington picked up two quick fouls and sat out for about half of the first half.

When Washington sat, the Cats went on a 9:32 stretch in which they didn’t make a field goal. UK’s nonexistent offense let the Volunteers stretch out a 14-point first-half lead, and Kentucky trailed by 13 at the half.

The second half didn’t go much better, as the Volunteers opened the period with a 10-3 run that stretched the lead to 20, which would be the largest of the game. They cruised to their win after that, thanks to consistent performances from Jordan Bone (27 points, 11-15 FG, 5-5 3PT) and Grant Williams (24 points, 8-11 FT, 7 rebounds)

Williams was able to run free in large part because of the absence of Reid Travis. Travis was the one guarding Williams in the last matchup between the two powerhouses, and Williams struggled. Since Travis suffered a knee sprain against Missouri a week and a half ago, the Cats didn’t have that inside presence to check Williams. Travis is expected back for the postseason.

UK’s usual performers, especially on the road, couldn’t generate anything. UK’s top two freshman scorers, Tyler Herro and Keldon Johnson, combined to shoot 4-20 from the field, including 1-10 from three. Even Washington’s 13 points to lead the team came largely at the foul line, since he only shot 2-6 from the field.

The Volunteers got their revenge, and the Cats now have to look to their road game against Ole Miss, a team that sits at fourth in the SEC, now behind Kentucky.