Drag queens tell students to embrace who they are 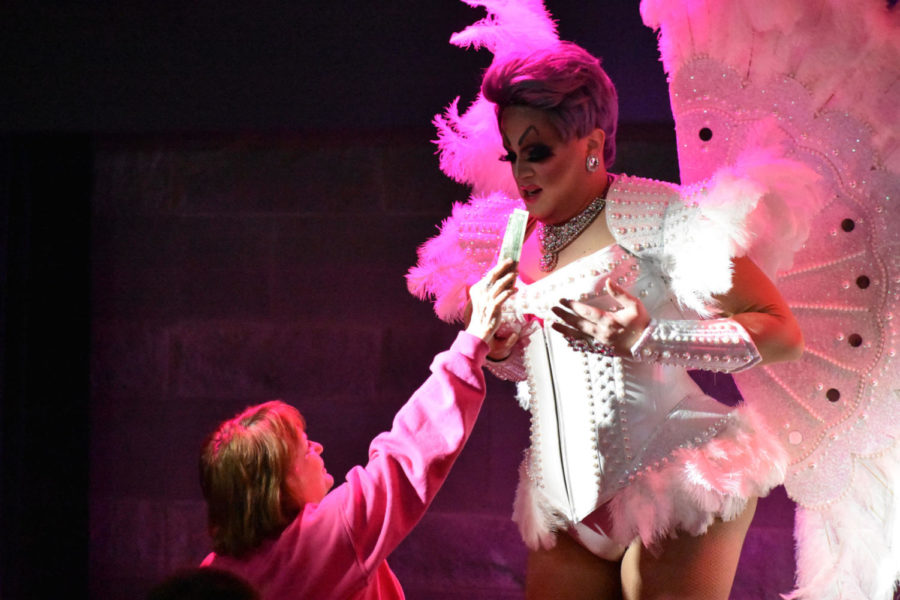 Uma Jewels accepts a tip from an audience member during the Cat's Den drag show on Thursday, February 28, 2019 in Lexington, Kentucky. Photo by Natalie Parks | Staff

Cat’s Den came to life Thursday night after four queens made their way through crowds and spotlights— four drag queens, that is.

Emcee and performer Helena Handbasket (wordplay on “Hell in a handbasket”), along with three other performers— Kristin Mingle, Uma Jewels and Aurora Cummings— graced the stage for a drag show with multiple lip-sync numbers of nostalgic songs like “Fancy” and “Cheap Thrills.” The audience enjoyed the songs as much as they enjoyed the jokes and puns that accompanied them.

Handbasket isn’t a newcomer to the Cat’s Den drag shows— she has hosted the event for three consecutive years.

“I feel like it was an important show to do because for a lot of the people in the audience it was their first time seeing a drag show, and I think it’s fun for us because we want to show people, especially young people, that we’re not somebody to be afraid of,” Handbasket said.

Even though she is only a freshman, Cat’s Den program manager Alaina Eifler knew that due to the drag show’s popularity in previous years, she would have to bring back the event this semester.

“From what I heard we had so many people it was like overflowing into the hallway that we were like ‘we can’t not do it again,’” Eifler said.

All the performers were bursting with energy and interacting with the audience, but Kristin Mingle was the one who made the crowd part of the performance.

She grabbed those willing from the audience and brought them on stage with her during her “Strut” and “Chicago” sets. She twerked with some and did the “shoot” dance with others. When it was time for them to leave the stage, she left them with a hug and a kiss on the cheek.

Sophomores Danielle Dunn and Ashley Poore attended the event together for the second year in a row on Thursday. Poore said that her favorite parts of the evening were the interaction between the performers, the jokes and everyone having fun.

“We came here last year, and we were just not disappointed. We’re never disappointed when we see these lovely drag queens. It was fun,” Dunn said.

Between sets, the emcee spoke about the mission of AVOL and their work with AIDS patients as well as throwing out grab and go bags of condoms to the audience. Handbasket encouraged students to get tested at the organization, and for those who hadn’t already to grab a bag of condoms and lubricate on their way out.

Handbasket ended the evening with a few parting words for the audience: “Never apologize for being who you are, ever.”