With Reid or not with Reid? That is the question 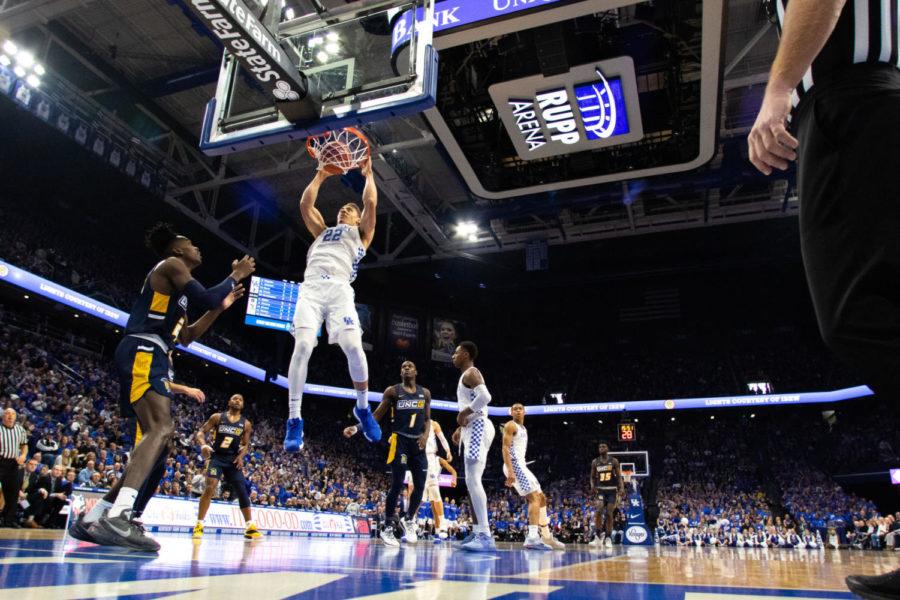 Kentucky graduate student forward Reid Travis slams the ball through the net during the game against University of North Carolina at Greensboro on Saturday, Dec. 1, 2018, at Rupp Arena in Lexington, Kentucky. Kentucky won 78-61. Photo by Jordan Prather | Staff

“Do you guys know Reid Travis is on our team? You guys do know that, right?” John Calipari joked after UK’s last regular season game against Florida.

Yes, Coach, we are aware, as I’m sure every member of Big Blue Nation is. But what exactly has the Kentucky men’s basketball team lacked since the 6-foot-8 forward went down with a knee injury back on Feb. 19? Let’s dive into it.

UK sophomore P.J. Washington has a few reasons as to why he thinks his team needs Travis on the floor.

“Obviously, we need Reid back. He’s a tough guy and is great on both sides of the ball. He makes shots, he rebounds the ball really well, and he’s a leader for us,” Washington said. “We’re missing him a little bit and we can’t wait until he gets back.”

Travis averages 6.9 rebounds per game, second on the team behind Washington, and while E.J. Montomery and Nick Richards have handled the pressure of trying to protect the paint, the presence of Travis in the post is still missed. Kentucky averaged 78.2 points with Travis and 70.2 without, forced an average of 13.9 turnovers with him versus 7.5 without and averaged 7.7 fewer points when the grad student was not on the floor.

“He’s a huge part of our team, obviously, leadership-wise. We want him back, but of course we don’t want to rush him back. It’s whatever is best for him. We are going off of what he says. Hopefully, sooner rather than later,” freshman Tyler Herro said. “He can make a tremendous impact. Without having him on the floor, it’s a little different. He does a lot of things that don’t show up on the stat sheet, you know, just getting it inside with the big plays. So, we want him back.”

Herro is exactly right. Toughness and leadership are things that are nearly impossible to teach— things the graduate student brings to the table with his experience.

When the Cats played Tennessee, they rebounded the ball 39 times in each game. The first time the two teams played (when UK had Travis) the Vols were outrebounded by 13. The second time around, Kentucky still outrebounded Tennessee, but this time only by three. As far as points go, UK outscored UT 36-20 in the paint in their first matchup, but in the second game without Travis, UT outscored UK 28-10 in the paint.

“His consistency of play is amazing,” Calipari said. “… Reid is going to give you what he gives you every minute he’s on the floor. So you miss that consistency.”

As of now, the jury’s still out on whether no. 22 will be dressed and ready to go by the time the SEC tournament rolls around; in fact, Coach Cal said himself that he doesn’t know the status of Travis’s knee.

“I’ve absolutely stayed out of it. I really haven’t even talked to the doctors because these kids know their bodies, and I don’t want him or anyone to think that I’m pushing him to play if he’s not — if he’s not right,” Calipari said.

That being said, Calipari still remains optimistic about the fact that it could be worse.

“Here is what’s good, it’s not an ACL. He sprained his knee. He’s going to be fine,” Calipari said. “Would I like to have him on my team right now? But not at any expense of his, no.”

Travis still has a few days left for his knee to heal up, so we’ll soon find out whether the Cats will have their big man back.