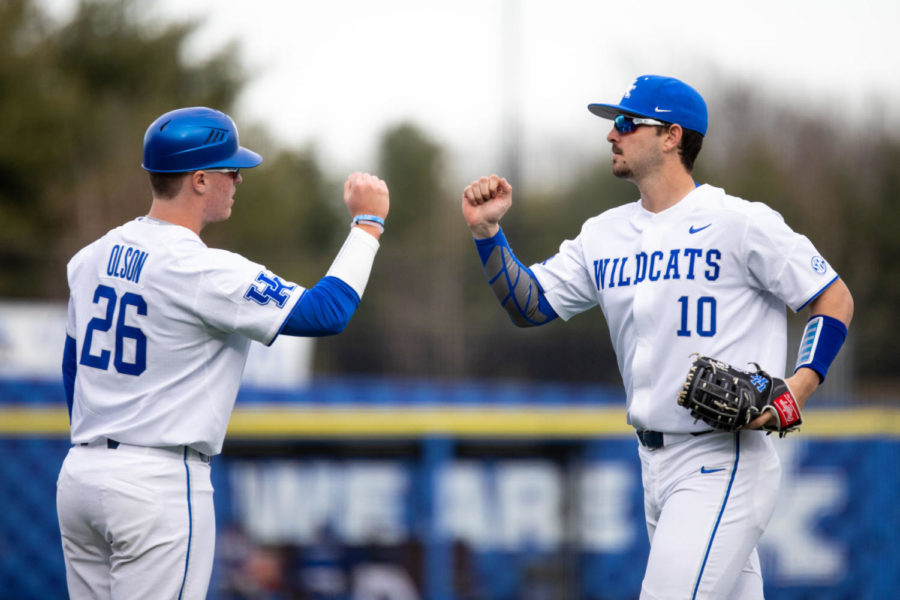 Despite being the underdogs yet again against another conference rival, the Kentucky Wildcats claimed their first SEC series victory over the No. 10 Ole Miss Rebels on the road. Though they lost the first game 8-2, the Cats battled back in Sunday’s doubleheader to win both games (4-1, 4-2), allowing the team to return home this week with a positive 20-16 overall record (4-11 SEC).

Friday night’s game began and ended with Ole Miss triumphing over Kentucky. With head coach Nick Mingione being ejected after not receiving the interference call he believed the Rebels should have received early on, the Cats struggled to keep their opponents from touching home.

In the first, the Rebels struck out all three Kentucky batters straight away, followed closely with its own offense scoring a three-run homer.

Ole Miss continued its pattern of shutting down the Cats and scoring runs themselves throughout most of the game. The Rebels scored at least one run each inning between the fifth and the eighth, while their pitching and field defense kept the Cats down to only three hits and no runs through the end of the eighth.

Kentucky managed two runs in the top of the ninth with RBI hits from junior Jaren Shelby and sophomore Cam Hill. The game ended with the Rebels on top of the series 1-0.

Due to inclement weather on Saturday in Oxford, the second game of the series got pushed into a Sunday doubleheader, each game having only 7 innings of play. After two back-to-back wins on Sunday, the Wildcats left Ole Miss with a 2-1 series record against the Rebels.

In inning two of game two, junior TJ Collett put the Cats on the scoreboard first with his eighth home run of the season. In the third, sophomore Coltyn Kessler notched an RBI hit to keep the Wildcats floating above the scoreless home team. Junior Dalton Reed wrapped up the scoring for the Cats in the fourth with another home run for Kentucky that allowed both himself and freshman Orlando Adams Jr. to score the last two runs of the second game.

The Rebels scored a run of their own in the bottom of the seventh. Even with seven hits throughout the game, the Cats held their opponents down with the field defense that was not present in Friday’s game.

The third and final game of the series also ended with Kentucky dominating a ranked team. Ole Miss scored six total hits to the Cats’ five, but the comeback Cats were present to take the series as their own.

Collett added another home run to his name in the fourth, this time allowing his team to score three times to start the game off with a larger lead. Wildcats starting pitcher Zack Thompson kept the ball rolling through all but the final inning, ensuring that the two runs the Rebels scored in the fifth were their only for the rest of the day.

The Cats scored once more in the fifth with freshman Austin Schultz’s RBI hit which allowed him to touch base for the 26th straight game.

Kentucky baseball will return home for their second game this season against the Louisville Cardinals. First pitch is set for 6:30 p.m.