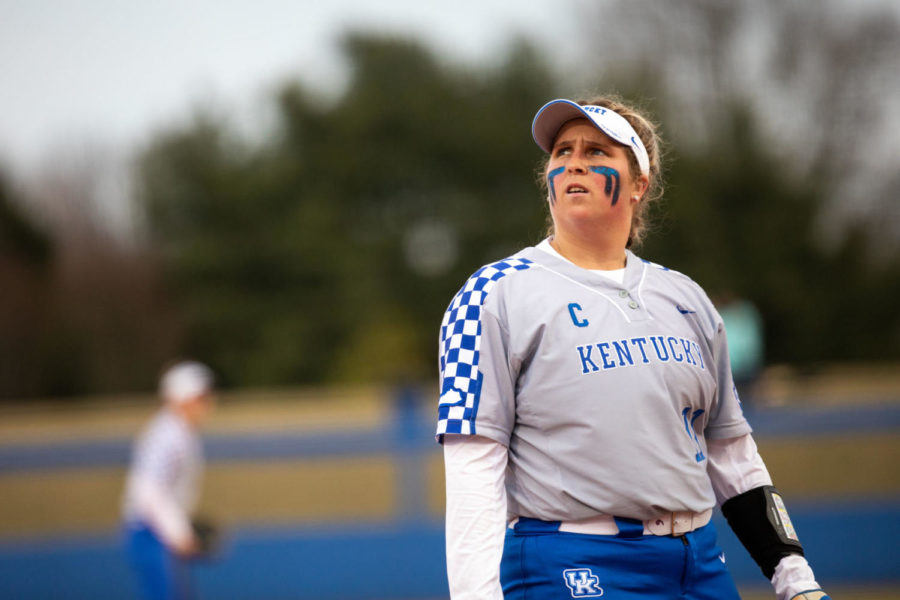 Kentucky senior Abbey Cheek looks up into the stands during the game against Miami University (OH) on Tuesday, March 12, 2019, at John Cropp Stadium in Lexington, Kentucky. Kentucky won 9-1. Photo by Jordan Prather | Staff

With two outs in the bottom of the seventh and the score 7-7, Taylor Roby hit a single off Cats’ pitcher Autumn Humes to center field that brought home Celene Funke for the game-winning run.

Errors and stolen bases came back to bite the Cats on Wednesday night. The Cats committed three errors and allowed five Louisville stolen bases. Both totals are season highs for UK.

Humes (9-8) received the loss after pitching the last 5 2/3 innings of the game in place of starter Grace Baalman. Humes allowed four runs and eight hits with four strikeouts.

Katie Reed and Lauren Johnson were the consistent offensive pieces for the Cats as they fought to keep the Cats’ hopes alive. Reed went 2-for-3 with two RBIs. Johnson went 3-for-4 with two RBIs and two doubles. Alex Martens provided some muscle with a solo home run in the fourth inning.

The Cats’ looked determined to boast rivalry bragging rights after striking first. Reed cracked a single to left field to bring home two runs and make it 2-0 Cats in the first inning. Louisville had an immediate response that same inning. Megan Hensley and Rebecca Chung each chipped in an RBI to even the score 2-2.

Jenny Schaper advanced on a wild pitch in the second inning to give the Cats the lead back at 3-2. Funke whacked an RBI triple to left center to tie the game back up. Sidney Melton came home on a fielding error to make it 4-3 Cards.

The Cards appeared to have a stronghold an inning later in the third. Melton, Hensley and Roby each drove home a run that inning to make the score 7-4 Cards. Martens ripped her homer in the fourth inning to even the Cats’ deficit to two runs.

After three deadweight innings, the Cats came back in crunch time. In the seventh inning, Johnson hit an RBI double to bring the Cats within a run. Schaper winged a sacrifice fly to left-center field to tie the game up at seven apiece. The Cats were a hair away from extra innings until Roby’s walk-off.

The Cats will make the quick drive back to Lexington and welcome the No. 14 Auburn Tigers in a three-game series that kicks off on Saturday, April 19th at 7 p.m. SEC Network will have the broadcast.