How UK students went from hunger strike to campus sit-in 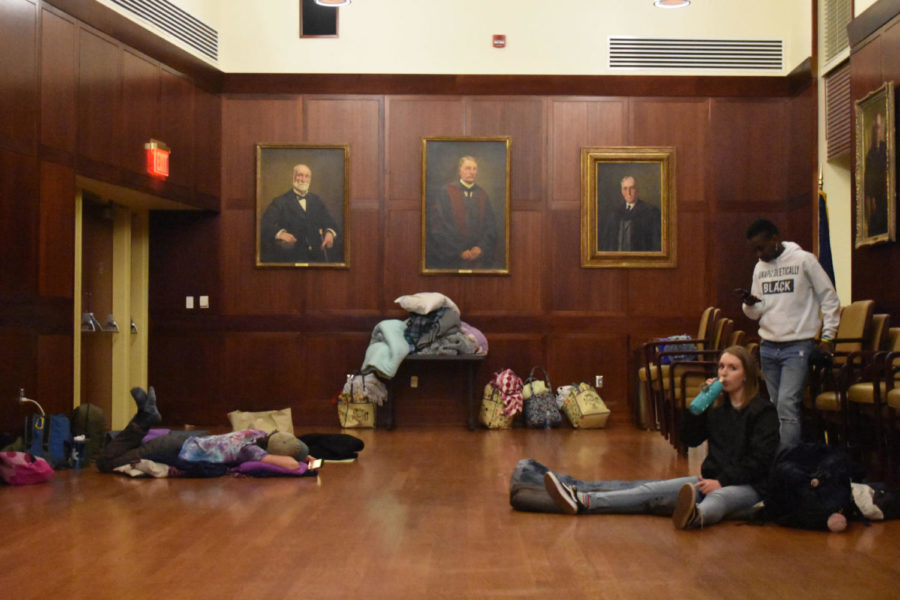 Occupiers begin to spread out in the designated sleeping area during the occupation by the Black Student Advisory Council and Basic Needs Campaign on Monday, April 1, 2019 in Lexington, Kentucky. Photo by Natalie Parks | Staff

If you’ve passed anywhere near the Main Building on the University of Kentucky campus, you may have heard or seen the peaceful occupation of a group of UK students. The two separate groups who are joining forces for the occupation are the Basic Needs Campaign and the Black Student Advisory Council.

The occupation in the Main Building is almost 24 hours old, but it is merely a head to issues that have been in the works for years on campus. Here’s what we know so far about the most recent events leading up to and surrounding the occupation and hunger strike.

March 21 — A group of about 200 students met in Memorial Hall to discuss food insecurity as part of SSTOP Hunger. This meeting was part of an initiative to push the university to establish an entire Basic Needs Center that would offer resources to less privileged students.

March 27 —  The hunger strike began after students enjoyed a day of free food. At a free dinner in the Funkhouser building, SSTOP members announced that six of SSTOP Hunger’s members were going on a hunger strike. Several other students began modifying their diets in other ways.

March 28 — UK president Eli Capilouto sent out a campus-wide email to inform the student body that he had made contact with the students on strike and to inform students about resources around campus such as Big Blue Pantry.

The Basic Needs Campaign has demanded that UK:Establish and fund a physical Basic Needs CenterEstablish a Basic Needs Fund and Create a full-time Basic Needs staff positionThe Black Student Advisory Council has demandedthat the Council have a permanent seat on search committees for administrative officials that UK revise the William C Parker Scholarship, standardizing the role of Diversity and Inclusion Officers, releasing the findings from the 2016 Cook Ross Survey andtake down the mural in Memorial Hall.

Tuesday, April 2 — Capilouto met with with the occupying students. One of the demands of the Black Student Advisory Council was met. Now, they will have a permanent seat on all search committees for administrative officials. No other demands were met. The hunger strike and the occupation continue. About 350 students have agreed to fast in some degree in solidarity with the movement.

The topic of food insecurity at UK became a conversation in 2014, and various steps have been taken since then to provide a support system for students who are food insecure, homeless or in some way underprivileged. Those steps have included the opening of Big Blue Pantry in 2014, SSTOP Hunger’s establishment in 2015 and the 2017 launch of UK Food and Housing Access Survey. SSTOP stands for Sustainable Solutions to Overcome Poverty.

The Food and Housing Access Survey asked 2,000 students about their food or housing insecurities. The results of that survey showed that 43 percent of students on campus are food insecure and 8 percent are housing insecure.

The Black Student Advisory Council was launched in February after some members of the Black Student Union sought to push for more transparency in UK’s administration and more resources and representation for people of color.

In January 2019, the Basic Needs Campaign was founded and since then, they have fought to provide awareness about insecurities on campus and encourage the administration to provide more resources.

The Basic Needs Campaign and Black Student Advisory Council joined forces to occupy the Main Building to show UK’s administration that “students have power in numbers”.