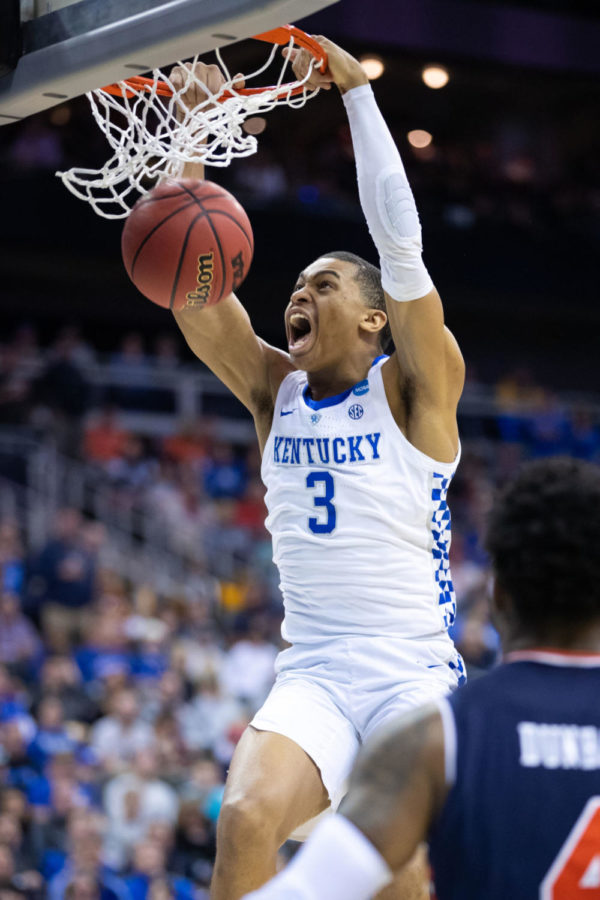 Freshman guard Keldon Johnson dunks the ball. University of Kentucky men's basketball team lost to Auburn 77-71 in the Elite Eight round of the NCAA Tournament on Sunday, March 31, 2019, at the Sprint Center in Kansas City, Missouri. Photo by Michael Clubb | Staff

The Kentucky men’s basketball season wraps up once again, with a loss to an overachieving Auburn Tigers team that stole and shot their way into the Final Four, exceeding expectations.

The Cats ended another season in the Elite Eight, one game shy of hanging another banner in the Rupp Arena rafters. One hasn’t been added since 2015, when Karl-Anthony Towns led the Cats to the Final Four.

This raises some concerns about the trajectory of Kentucky’s program. Are they satisfied with a plateau, failing to reach excellence? Has John Calipari lost his touch? Even ESPN’s Emmy-nominated morning show, Get Up!, debated whether or not Calipari was on the “hot seat,” or if he was still performing well enough to keep his job.

Looking back on the season, it was likely one of the best coaching performances by any coach in the country, except for possibly Tom Izzo of Michigan State or Chris Beard of Texas Tech. The losses this season tell the story so much more than the wins.

The first flurry of losses looked bleak for the Cats. They got obliterated by Duke on a neutral court, lost to a less talented Seton Hall team and got beat by Alabama in their SEC opener. The Cats were young, undisciplined on defense and struggling to put together a good, complete game.

UK looked entirely scattered before a brutal four-game stretch that included blue-blood schools North Carolina and Kansas. UK beat them both, and neither game came down to the last possession. Point guard Ashton Hagans became a team leader and secured the starting point guard spot for the team, replacing Immanuel Quickley.

Hagans then went on a defensive tear, notching three or more steals in the most consecutive games since Chris Paul did it 10 times in a row for Wake Forest.

As Hagans declined, P.J. Washington rose. He dominated defenses to get into the mix for SEC Player of the Year. The Cats wouldn’t lose again until a controversial basket interference no-call led to a game-winner by LSU. They responded by destroying conference rival Tennessee in SEC play.

From there, the team seemed to plateau. A humbling loss to Tennessee before they headed to the SEC Tournament saw the Cats as the second-seeded team in the conference. They lost in a thriller to Tennessee, and the team took a blow with the loss of Washington.

To go from an undisciplined, scattered team to a national contender competing for a Final Four is a prime example of the work done at Kentucky. Plenty of members of the team will likely be returning next season.

Calipari’s new lifetime contract, confirmed by UK, means that there are likely more national contending years in the future, and that’s just fine.