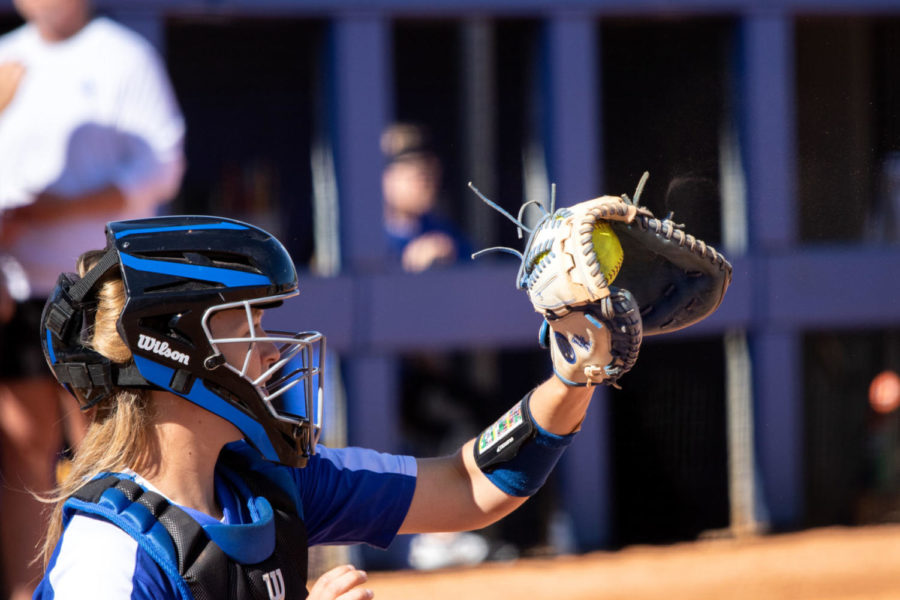 When some people are nervous, they might try to calm down by sipping on Chamomille tea. But for the UK softball team, catcher Jenny Schaper just might be that cup of Chamomille tea.

“She’s kinda the calming factor. She’s given our team a lot of confidence,” UK head softball coach Rachel Lawson said after the Cats’ series sweep over Auburn on Monday night. “She doesn’t get rattled. She’s just a very calm person,”

In a tightly contested game after six scoreless innings between Auburn and UK on Monday night, Schaper boosted her team with a solo shot home run in the bottom of the sixth inning. Following the home run, everyone, according to Schaper, “relaxed” and “got a breakthrough.”

“Right before that inning, Coach [Kristine] Himes pulled us together and said, ‘Pick a speed, pick a pitch, see it, hit it,’ and the first one I saw was exactly what I was looking for and I connected with it,” Schaper said Monday night.

Schaper’s home run and Himes’ message seemed to resonate with the rest of the team. Kayla Kowalik, Mallory Peyton and Schaper, again, combined to drive in six more runs that same inning to cap a season-high seven-run inning.

“It was a momentum shift and then, you know, we kinda got to the pitcher and I think when you get to the pitcher, they get more tense and then everything just kind of went in our favor,” Schaper said.

It wasn’t just on Monday night, though, when Schaper’s efforts came to light. In game one of a doubleheader Sunday afternoon, Schaper blasted two solo home runs in what was also a 7-0 victory. She finished the series with three home runs, five hits and six RBI.

“I think the key this weekend, in addition to great pitching and jelling on the team, is Jenny Schaper. She was just amazing and just took the game and the series over,” Lawson said.

“She’s been a captain for over three years now, so, you know, the players vote for those captains and that by itself speaks volumes for how important she is to the team,” Lawson said. “She’s just such a selfless player and she’s so easy to play behind.”

Schaper’s “calming factor” may have vibrated on defense as well. She had a tight catch on an infield fly in the second inning as others did on defense, all of which helped preserve Grace Baalman’s complete game shutout.

“Auburn is a good team, so it’s tough. My team backed me up and the defense was outstanding today,” Baalman said.

With six regular season games left before the SEC Tournament, Lawson acknowledged the potential of the “calming factor” in the final homestretch.

“We figured out this weekend if we are calm and we play our game and the pitchers do what they need to do, then we’re a very good ball team.”