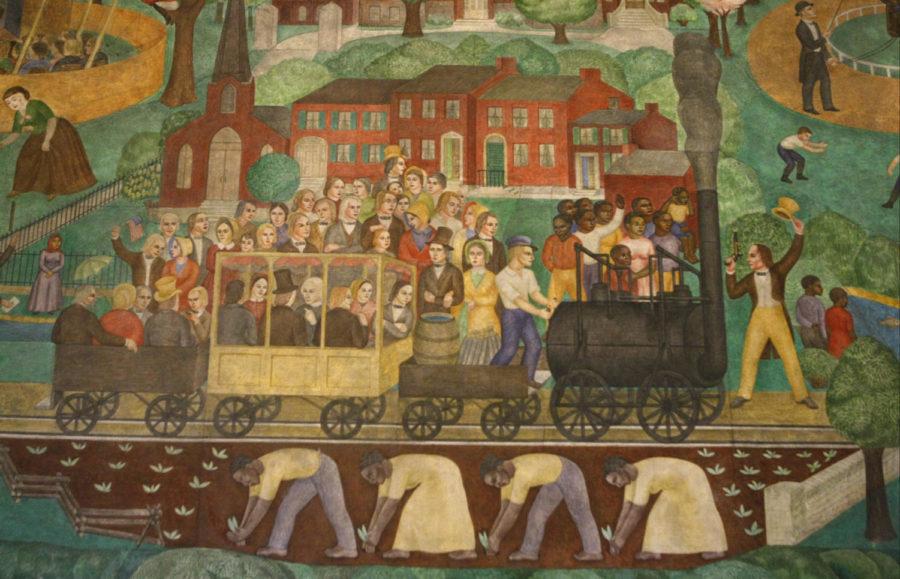 The mural inside Memorial Hall was created by Anne Rice O'Hanlon in 1934. Photo by Joel Repoley | Staff File Photo

The University of Kentucky administration will “immediately” cover a controversial mural in Memorial Hall that has been protested for several years on campus.

The news came in a campus-wide email sent by President Eli Capilouto on Tuesday evening and acknowledged that the 1934 mural in the foyer of Memorial Hall, which depicts slaves, is a “touchstone of pain and hurt for many students of color.”

This announcement from UK’s president came after the Black Student Advisory Council joined the Basic Needs Campaign in a sit-in occupation of the Main Building on campus on Monday. Among the Council’s demands of UK was the demand that the controversial mural be taken down.

Capilouto met with the students occupying Main earlier on Tuesday, at which time he said, “I have to confess it is difficult for me to consider removing that piece of art.”

At that time, Black Student Union president and chair of the Black Student Advisory Council Tsage Douglas told Capilouto and others gathered that, “It’s [the mural] not something that the University of Kentucky’s students are willing to put up with anymore. We’re not willing to be bought and sold.”

The mural was uncovered in 2016 after a year of debate surrounding its controversial contents. At the time, Capilouto called it “a larger narrative of our history, our aspirations, our shortcomings and the progress we must still make.”

Ann Rice O’Hanlon’s mural, installed five years after Memorial Hall was built, is considered to be  “one of the only true frescos” in the country, according to the O’Hanlon Center for the Arts’ website. A fresco is when a mural is painted onto wet plaster or a wet wall and becomes part of the surface, not merely on it. In 2018, in an attempt at compromise, an additional piece of art was added to Memorial Hall to give context to the O’Hanlon fresco, but it has remained a touchy subject for many students on campus.

Capilouto also wrote in the Tuesday evening email that UK’s administration will review the William C. Parker Scholarship and look for ways to improve it as well as work to standardize the role of diversity and inclusion officers. These were both demands that the Black Student Advisory Council outlined as part of their joint sit-in of the Main Building with the Basic Needs Campaign. Their third demand, that a Black Student Advisory Council representative have a seat on all search committees for administration officials, was met earlier Tuesday.

The Basic Needs Campaign’s demands were that UK establish a Basic Needs Center, a Basic Needs fund and hire a Basic Needs Staff. Capilouto agreed to all these in his email. He wrote that UK will hire “as a first step” a full-time professional staff member who will work directly with UK’s efforts to coordinate basic needs issues. The administration will also merge two emergency funds that will be “assessed and replenished” as needed to offer support to persons with insecurities, the email said.

Capilouto wrote that his efforts, outlined in his email, were “created in good faith with the students and informed by their thoughtfulness and passion.”