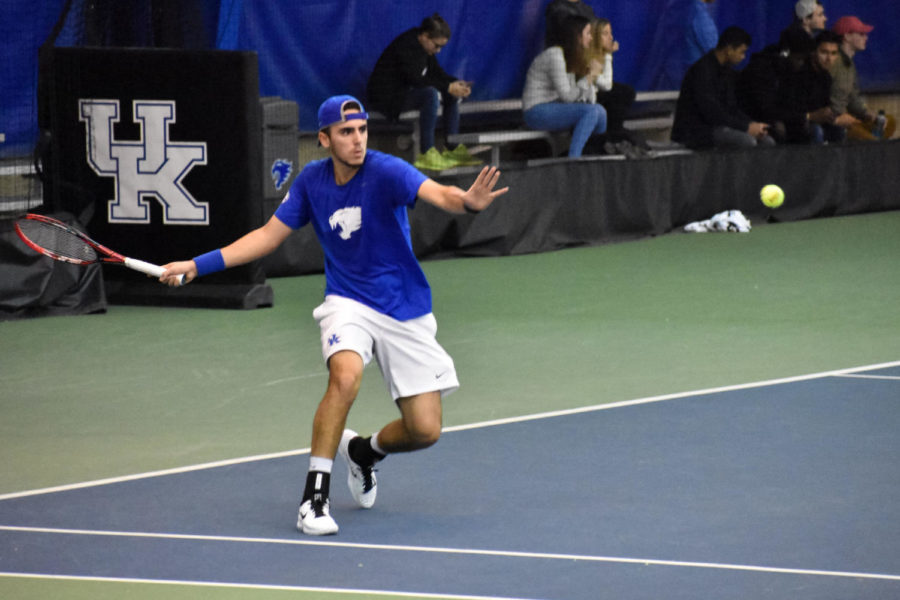 Enzo Wallart prepares for a return during his singles match against Notre Dame. Saturday, January 19, 2019 in Lexington, Kentucky. Photo by Natalie Parks | Staff

After defeating Dayton earlier in the day, The University of Kentucky men’s tennis team looked to claim victory and sweep a doubleheader, as they took on No. 17 Georgia at the Hilary J. Boone Tennis Center on Friday afternoon.

Doubles play didn’t get off to the best start for the Cats, as Georgia’s Trent Bryde and Philip Henning defeated Ryo Matsumura and Kevin Huempfner, 6-3.

The Cats would bring it back however, as Cesar Bourgois and Kento Yamada defeated the #14 doubles team of Robert Loeb and Jan Zielinski, 7-5. Bringing it down to the final match to decide who would claim the doubles point.

Enzo Wallart and Ying-Ze Chen would outlast Walker Duncan and Emil Reinberg 6-3, to win and award the doubles point to the Wildcats.

Singles play did not start out so well for Kentucky, either.

The Bulldogs would claim the first singles point of the night, as No. 122 Phillip Henning defeated Parth Aggarwal, 6-2, 6-2, tying things up at one point a piece.

Georgia would then take the lead as Walker Duncan prevailed over Kevin Huempfner, 6-2, 7-5.

The Wildcats would answer, as Cesar Bourgois came back from being a set down, outlasting Trent Bryde, 3-6, 6-2, 6-3, tying the match back up at two.

UK would soon pull into the lead, as Kento Yamada bested Robert Loeb, 6-4, 7-6. The Cats now only needed one more win for victory over the Bulldogs, and it came down to two of UK’s best singles players.

Enzo Wallart and Georgia’s Jan Zielinski, the No. 15 singles player in the nation, produced the best match of the night. Wallart eventually won the battle, 4-6, 7-6, 7-6, solidifying victory for UK.  The match included a court violation, a point penalty and even led to the ejection of a fan.

The Cats claimed victory 5-2, their fourth win over a nationally ranked opponent for the season and improve their record to 15-12 (5-6 SEC).

The Wildcats will look to close out their regular season with a victory, as they take on another nationally ranked conference foe in No. 15 Tennessee at 1 p.m. this Sunday at the Hilary J. Boone Tennis Center.