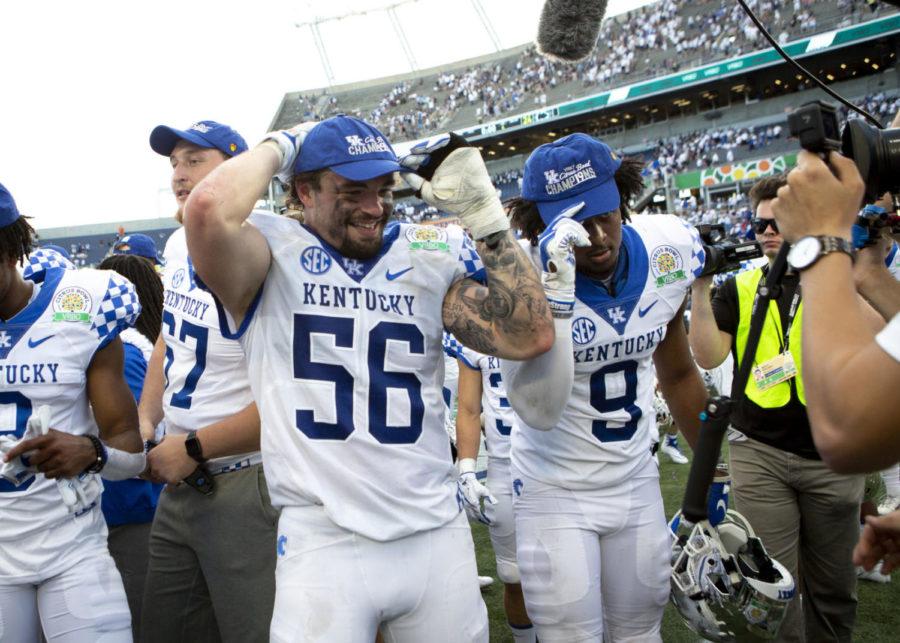 Heartbroken Kentucky men’s basketball fans just might have something to uplift their spirits as UK spring football is in full swing.

After winning their first bowl game in a decade and flirting with an SEC title game berth, UK brings back key pieces from last year’s chess set. However, there are massive shoes that need to be filled on both sides of the ball after 16 seniors departed Lexington.

“Saw some good things on both sides of the ball. Obviously, there’s some work that needs to be done. But I’m definitely encouraged with what I’ve seen so far,” head coach Mark Stoops said after a practice scrimmage.

Linebacker Kash Daniel will have a chance to take over former standout edge rusher Josh Allen’s leadership role on defense. Daniel provided value last season with the third-most tackles and tackles for loss on the team with 84 and 7.5, respectively.

“It’s good for me to be able to teach (the younger guys) because not only are they learning my position, but other positions too,” Daniel said in a post-practice presser. “That’s really helped me increase my football IQ and play a lot faster.”

“It’s a process. I know everybody hears that word, but it’s a step-by-step gradual thing with younger guys within years,” House said following a practice. “The players have got to understand that it’s a new firehose effect.”

Quarterback Terry Wilson will be back at the helm for the Cats. By his side will be running backs A.J. Rose, Chris Rodriguez, Kavosiey Smoke and signee Travis Tisdale. They’ll be replacing Benny Snell Jr.

“The older guys have an opportunity to coach to the younger guys about having their own outcome,” offensive coordinator Eddie Gran said following spring break. “Each person has to own their own outcome.”

Offensive tackle Landon Young has been practicing after he tore his ACL last season. Gran praised Young’s progress, saying that he “looks good and hasn’t missed a beat.” The senior will have a chance to anchor the offensive line.

The Kentucky faithful will get their first glimpse of next season’s Cats when they play in the Blue-White spring football game on Friday, April 12, at 6 p.m. at Kroger Field.