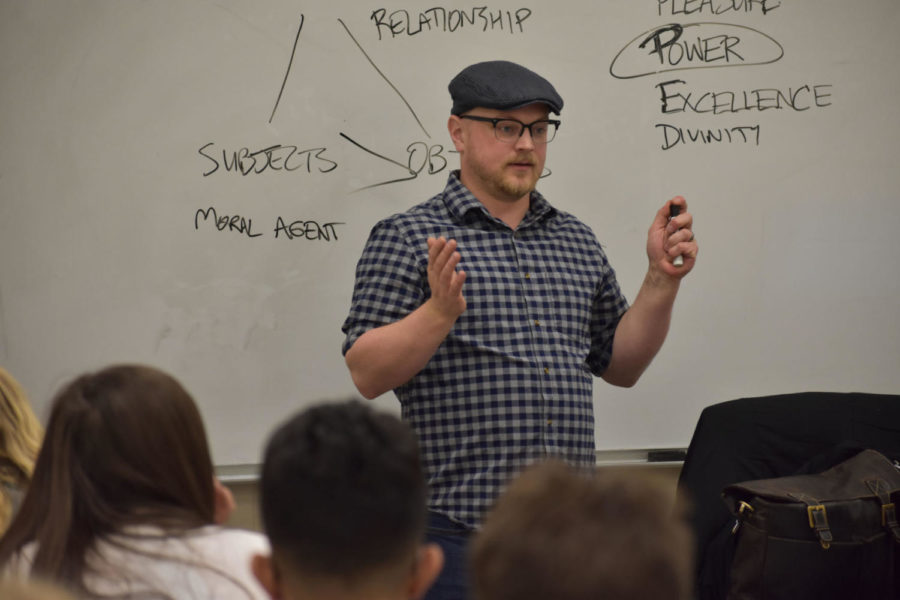 These days, Drew Van’t Land starts his morning with a veggie scramble: kale, spinach, onions, green peppers, tomatoes and avocados, all sautéed together, often with eggs.

PART TWO: Saturn X want to be their true self, but it comes at a high price PART THREE: Katie Mount works hard to break out of poverty

“I feel really nourished and healthy, but I also feel like, ‘Wow, I just ate a ton of produce,’” Van’t Land said. “I start calculating that in my head compared to a bowl of Cheerios or some Nutella on toast.”

One bowl of Cheerios with milk costs about 38 cents. A single piece of toast with one serving of Nutella costs about 60 cents.

As a sixth-year graduate student with a wife and two children to provide for, these are the breakfasts that Van’t Land can guiltlessly afford.

For the past year, Van’t Land, 31, has been the sole source of income for his four-person household. His wife Julianne stays home with their 5-year-old twins, Evelyn and Rowan. Meanwhile, Van’t Land works on his research at UK and teaches two sections of PHI 130: Intro to Philosophy and Morality in Society.

In between all of it, Van’t Land figures out how to stretch his $16,000 teaching stipend to pay for food, clothing, transportation and rent for himself as well as his family.

“Sixteen thousands would cover our rent for four people, and it would cover – maybe – transportation. Probably not food,” Van’t Land said. “So we’ve got a lot of other basic necessities that need to be covered.”

To make ends meet, Van’t Land teaches an extra philosophy class at BCTC. He also teaches an online course and a week-long philosophy camp for high schoolers, both in the summer. These part-time jobs bring his household income closer to $24,000.

But even with his UK stipend, extra work and thousands of dollars in loans, Van’t Land couldn’t bring food to the table without assistance from the Supplemental Nutrition Assistance Program (SNAP). Van’t Land said the program provides “several hundred dollars a month” for groceries.

Although they need the financial assistance, Van’t Land said the process of maintaining SNAP can be “horrendous,” as the system requires undeniable proof that you qualify for the program.

“I would break down after waiting and waiting in line,” Van’t Land said. “I was going early. I was going so frequently to give them new information. You think you’ve given them everything they need, and they’re like ‘nope, we need more.’ So, you give them more. And it’s not enough, and by this time, your application has expired, and you have to re-apply.

“But it’s also a privilege that I know some of my colleagues don’t get,” Van’t Land added. “(It’s a privilege) to be able to get any kind of assistance from the state.”

As a philosophy student studying exploitation of labor, Van’t Land feels caught between need and privilege. He sees that privilege in his decisions – like making a veggie scramble instead of eating a bowl of Cheerios – and in his profession as a graduate student.

“Most workers have it worse than me,” Van’t Land said. “(Graduate students) are a really precarious demographic… but we’re also really privileged. You get the time to think about all these things – especially if you’re studying social theory like I am – and it just drives you crazy.”

Van’t Land even feels privileged when he thinks about his own history with food insecurity.

Now, Van’t Land eats out once or twice a week. He typically gets Chick-fil-A with his family once per weekend. But just a few years ago, when he and his family lived in Toronto, he couldn’t afford any meal outside the home.

“I remember… going out with some students, some of my new colleagues, and getting lunch, and literally not having enough money,” Van’t Land said. “I got a bowl of   that was a dollar. That moment really sticks out in my mind. Like, yeah, I was definitely food insecure then.

“Now I feel guilty that things have opened up a little bit,” Van’t Land said.

Most of Van’t Land’s budget decisions come down to what is healthiest and what is cheapest. He describes the two options as a “tradeoff between physical and moral sensitivity.”

The tradeoff applies to food decisions as well as transportation and extracurriculars.

Two hours of Van’t Land’s average day are reserved for biking to and from campus. Although faster transportation services like Uber or Lyft are tempting, they add yet another cost to the family’s budget. As a result, Van’t Land limits campus activities that occur in the evening, like the Basic Needs Campaign and Black Student Advisory Board’s occupation of the Main Building on Monday, April 1.

During the occupation, Van’t Land spent “a few minutes” in the Main Building to support the movement, but ultimately went home.

“I thought about coming back (to stay the night),” Van’t Land said. “It was dark… but I thought, ‘well, I could just take an Uber back,’ and then I’m thinking, ‘okay, that means I’m gonna have to take one back tomorrow, and it’s gonna be 8 to 10 bucks both ways, so that’s another 20 bucks, and on my bike it’s free.’ I’m always making calculations like that.”

Van’t Land’s veggie scrambles cost about $1.87 each morning, compared to 38 cents for a bowl of Cheerios with milk and 60 cents for toast with Nutella. This is the kind of calculation Van’t Land makes every day between his classes and his research. It is a calculation with consequences for himself, his wife and his children.

“I feel like I paint a picture of a life that I’m really enjoying – and that’s true,” Van’t Land said. “It’s just really precarious.

“I don’t fear being food insecure next week, but definitely in a month,” Van’t Land said. “It’s like the edge of a cliff. Just one thing goes wrong… and life would just suddenly become very unlivable.”