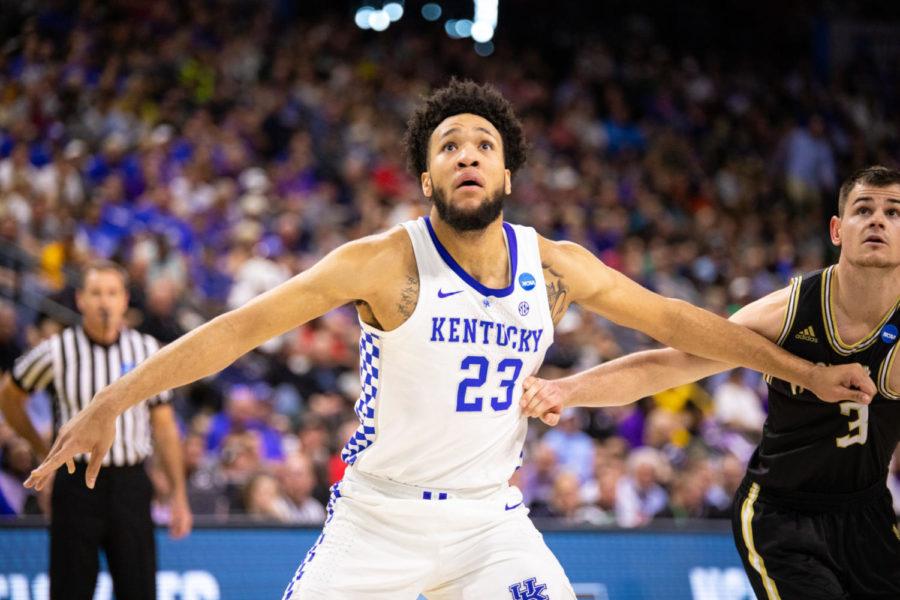 Kentucky freshman forward EJ Montgomery boxes out under the goal during the game against Wofford in the second round of the NCAA tournament on Saturday, March 23, 2019, at VyStar Veterans Memorial Arena in Jacksonville, Florida. Photo by Jordan Prather | Staff

After UK forward Nick Richards announced yesterday his return for a junior season, EJ Montgomery has confirmed he will be back in blue and white for his sophomore year. Montgomery is one of the many to test the NBA waters and the NBA Draft process, but has ultimately decided to stay at Kentucky.

The decision was originally reported by NBA insider Adrian Wojnarowski before being confirmed by Montgomery himself on Instagram.

Big Blue Nation, I just want to say thanks for all you’ve done for me and my family,” Montgomery said in a social media post. “I enjoyed putting on a Kentucky uniform with my brothers and playing in front of the best fans in the nation. I appreciate your support for me and my teammates this season. I want to say thanks for Coach Cal, Coach KP, Coach Joel, Coach Robic and Coach Barbee for pushing me every single day to be the best I can be on and off the court. I got to compete against the best of the best every day in practice. We had a good season on the court because of our love for the grind. I’m proud of what we accomplished together. BBN, I’m back. Year two.”

The 6-foot-10 forward tallied 11 rebounds in his first-ever NCAA Tournament game against Abilene Christian and recorded his first career double-double with 11 points and 13 rebounds in a win over South Carolina.