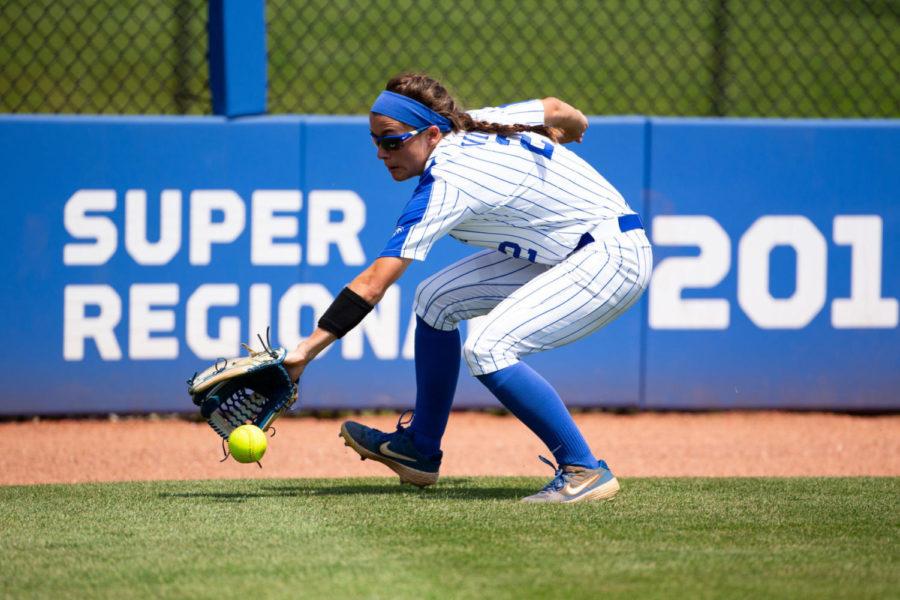 Kentucky senior Bailey Vick catches a ball bouncing off the ground during the game against Toledo in the NCAA tournament Regionals on Friday, May 17, 2019, at John Cropp Stadium in Lexington, Kentucky. Photo by Jordan Prather | Staff

Appearing in their 11thconsecutive NCAA Regional, the No. 14 seeded UK softball team (34-22) hosted the Toledo Rockets (29-27) on Friday afternoon claiming a victory to advance in the double-elimination bracket.

The power hitting of Abbey Cheek, Alex Martens and Lauren Johnson helped push the Cats. Cheek went 1-for-3 and Martens went 1-for-4. However, Cheek’s only hit helped give the Cats a jumpstart early on and Martens’ home run in the fifth inning helped put the game away. Johnson went a perfect 3-for-3 with an RBI.

Autumn Humes (14-10) handled business for five innings after a shaky start. She allowed seven hits, five of which came in the first inning, and two runs which also came that same inning. However, she was able to garner two strikeouts and outduel Rockets’ starting ace Erin Hunt (17-12).

Appearing in only their third-ever NCAA Regional, the Rockets came out firing as soon as the game began. Bekah Yenrick singled through the right side for an RBI to give the Rockets a 1-0 lead in the top of the first inning. Two batters later, Morgan Paaverud singled to center field for another RBI, increasing the Rockets’ lead 2-0.

The Cats immediately responded that same inning. With no outs, Cheek, the SEC Player of the Year, delivered a double to center field before reaching third on an error to bring home two runs, tying the game at two. Cheek soon scored after a throwing error to give the Cats a 3-2 lead. Lauren Johnson popped a single to the left side to increase the lead 4-2.

But, for the next four innings, both teams would continue a trend of scoreless, hitless innings. Neither team gathered a hit for the next two innings. UK wouldn’t get another hit until the fourth inning and Toledo wouldn’t until the fifth inning.

It was in the fifth inning, though, that the bat Cats would come back out swinging. Martens, who had struck out twice at that point, whacked a two-run homer, her 12thon the year, that hit the scoreboard to increase the Cats’ lead 6-2. Kelsee Henson hit a sacrifice fly to left field to bring home another run.

Meghan Schorman’s relief helped seal the deal for the Cats as she hurled the final two innings. She didn’t allow any runs and only gave up a hit and two walks. Another highlight on offense was Kowalik hitting a perfect 2-for-2 at the plate.

UK will host the Virginia Tech Hokies at noon tomorrow. ESPN3.com will have the broadcast. The winner of that game will not have to play until Sunday, while the loser will face the winner of tomorrow’s Illinois-Toledo elimination game.