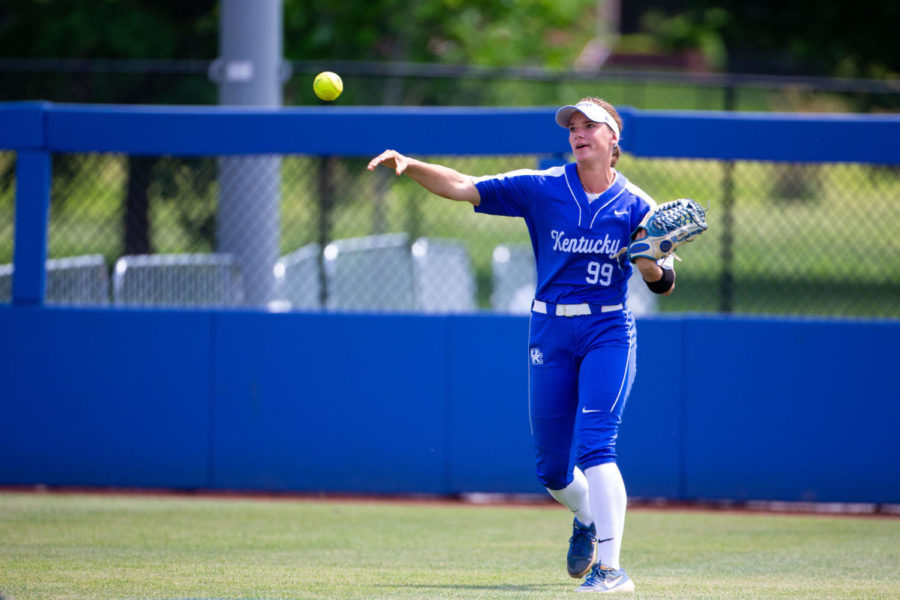 Kentucky freshman Kayla Kowalik throws from the outfield during the game against Virginia Tech in the NCAA tournament Regionals on Saturday, May 18, 2019, at John Cropp Stadium in Lexington, Kentucky. Photo by Jordan Prather | Staff

The No. 14 seeded UK softball team (35-22) is now one win away from its third consecutive NCAA Super Regional following an 8-1 victory in the NCAA Lexington Regional over the Virginia Tech Hokies (46-10) on Saturday afternoon.

A three-run fourth inning and four-run fifth inning helped the Cats break a scoreless tie and put the icing on the victory cake. Kayla Kowalik was a centerpiece on offense after hitting a nearly perfect 3-for-4 at the plate with an RBI and two runs scored.

“I go up to the plate with the same approach every time and, it’s like setting up your vision, it helps a lot. It starts with batting practice and setting up your goals and visions,” Kowalik said.

“My mindset was to keep working. I told myself not to worry about giving up a hit, you just have to get the next batter and get the out,” Baalman said.

The Cats’ closest scoring opportunity before the fourth inning came in the bottom of the second inning with two outs came when they attempted a hit-and-run play. Lauren Johnson hit a single towards right field when Kowalik ran into the ball. Kowalik was called out on interference.

But the softball gods would open the gates wide open in the fourth inning.  With two outs, Johnson hit a ball into shallow right field and hustled to third while driving in Kowalik. Jenny Schaper followed up with an RBI single. Another run scored on the play after a throwing error.

“I went up to bat with the approach of, ‘There’s runners all over the place. Just drive in one, just drive in one.’ I tried my best to stay in the at-bat and compete until I got a pitch I could hit,” Schaper said.

The Cats remained in scoring paradise in the fifth. Pinch runner Jaci Babbs scored on a wild pitch before Kowalik singled to drive in her sole RBI of the day. Bailey Vick bunted toward third to bring home a run before a throwing error brought in another run, increasing the Cats’ lead 7-0. Virginia Tech had four errors on the day.

The Hokies’ only run of the day came on a solo home run by Emma Strouth in the sixth inning. Alex Martens hit a sacrifice fly to right field that brought home Katie Reed, bringing the Cats within a run of a run-rule victory. A groundout by Kowalik ended the inning though.

“I thought our team did job did a great job staying in the game. I was proud of them for continuing to fight,” UK head softball coach Rachel Lawson said postgame.

The Cats will square off against the winner of Saturday’s Toledo-Illinois elimination game tomorrow at noon. If the Cats lose, they would have to play an elimination game immediately thereafter.