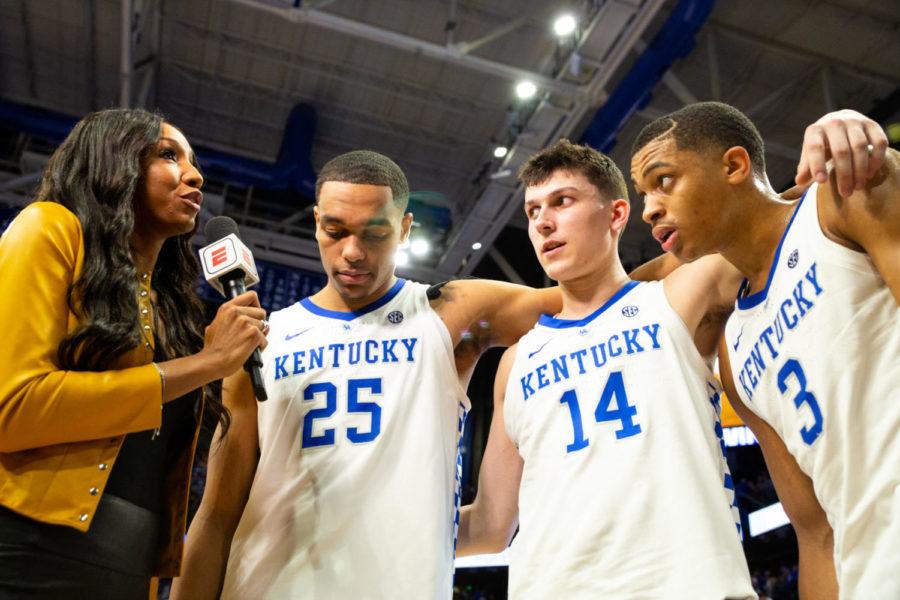 Washington kicked things off after being selected 12th overall by the Charlotte Hornets. The sophomore standout led the Cats in points-per-game and rebounds per game last season with 15.2 PPG and 7.5 RPG. Those numbers earned him accolades like multiple All-America selections, an SEC first-team selection and being named one of five Karl Malone Award finalists.

“Can’t thank God enough. Excited for me and my family. I can’t thank them enough. I can’t thank my coach enough. Just blessed to be in this position,” Washington said after being drafted.

Herro was selected immediately thereafter by the Miami Heat with the 13th overall pick. His freshman year culminated with receiving the AP SEC Newcomer of the Year Award following a 14.0 PPG and 4.5 RPG season. He also set the Cats’ single season record for the best free-throw percentage in a season at 93.5 percent.

“I’m really happy for PJ and Tyler. There were teams that were hoping that they would go past 12 and 13 that really wanted them. They were so excited to go back-to-back. I heard PJ got up from an interview to applaud Tyler. I’m happy where they are and the kind of teams and coaches they will play for,” Calipari said Thursday night.

Johnson capped off the night for the Cats’ faithful after being selected 29th overall by the San Antonio Spurs. He also had an impressive freshman year last season after being named the SEC Freshman of Year and making the John R. Wooden midseason watch list. This came after being third on the team in PPG and RPG with 13.5 PPG and 5.9 RPG.

“I think I bring a lot of energy, hard-working. I think that I can get up and down and run. I feel like I’m very versatile, play multiple positions. I think I fit pretty well,” Johnson said after his selection.

Graduate transfer Reid Travis, the only remaining draft-eligible former Wildcat, went undrafted on Thursday night. He could, however, sign with a team as a free agent.

Kentucky, along with Duke, North Carolina, Tennessee and Virginia, rounded out the night with three draft picks each for the most selections in the 2019 NBA Draft.