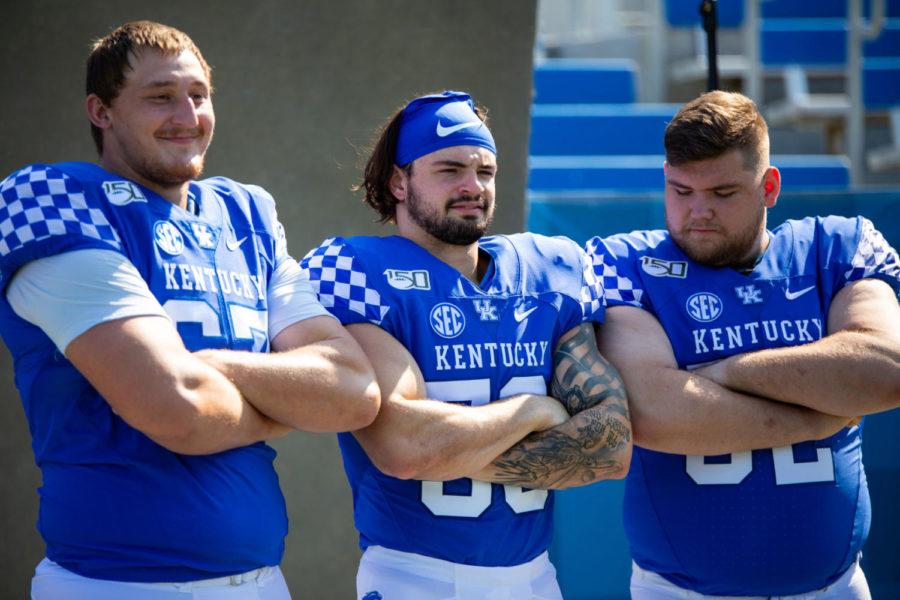 Erika: 7-5. I realize I also made that same exact prediction last year and was embarrassingly wrong, so here’s to hoping this doesn’t bite me in the butt again. What the Cats did last year was incredible and will be extremely hard to match, although I don’t think anyone is expecting 10 wins again. 2019 will be a solid, winning season under Stoops that keeps the program relevant and credible, but with so many personnel changes, it will be tough to have as much success as they did last season.

Mohammad: I second Erika and say 7-5 as well. The Cats’ potential is up there and they have a chance to replicate success similar to last year. But I’m not fully convinced they can go 9-3 like last season because of the mammoth holes left behind by the likes of Josh Allen, Benny Snell, Lonnie Johnson and Mike Edwards to name a few. There’s some inexperience, especially on defense, but I think returning stars like Kash Daniel, Terry Wilson and Lynn Bowden will help keep the team afloat this season.

Chase: Before Davonte Robinson went down, you could convince me they’d go 9-3, though I’d have some reservations. What helps the Cats this year is a generally easy schedule. I expect them to get walloped by Florida and Georgia, but their other ten games are extremely winnable. Toledo will be the most difficult non-conference game. I’ll say they go 8-4 after losing close conference games.

Who are the two biggest key players for the Cats this season? (one offense, one defense)

Erika: Offensively, Terry Wilson. Without a doubt. In fact, I think a lot of what the Cats do this season rides on Wilson’s success (or lack thereof). We saw him slowly improve over the course of last season and saw glimpses (remember the last few minutes of the Missouri game?) of what he’s capable of, and the Cats are going to have to rely on him to be versatile and help create a balanced offense. On the other side of the ball, Kash Daniel will be the key factor. With so many young players, especially the guys behind him in the secondary, it’ll be up to him to lead the defense and help out the younger guys.

Mohammad: Terry Wilson and Kash Daniel, that’s a no-brainer. As the quarterback, Wilson already naturally bears a lot of responsibility. He’s the one who has to help make sure Eddie Gran’s system comes together. After the Cats’ second scrimmage, Wilson and Mark Stoops both mentioned that Terry has been more comfortable. That’s going to be huge, especially when he’s under pressure and the pocket is collapsing. As for Daniel, he’s got massive shoes to fill on a defense that lost nine defenders, most notably the great Josh Allen. I’d like to see what first-year inside linebackers coach Jon Sumrall draws up for Daniel and the talent around him in the middle.

Chase: The other two are very right, Terry Wilson is THE most important player for the Cats on either side of the ball this season. We know the receiving talent is there, even if it’s young, and we know A.J. Rose can run. For the Cats to succeed, Wilson will have to improve his decision-making, not take so many sacks and calm down while he’s out there. On defense, Chris Oats or Boogie Watson will be the key player (not the best). It’ll be one of their jobs to replace Josh Allen and provide pass rush, which was a key part of the pressure Kentucky applied defensively last season. If they fail, the passing attack will eat UK’s young DBs alive. If they succeed, it’s like Kentucky never missed a step.

Who will be UK’s breakout player?

Erika: Kavosiey Smoke. The Cats’ starting running back will be A.J. Rose, but I thought what we saw from Smoke last year was very promising. He’ll get a lot of reps behind Rose and will definitely turn heads in his sophomore season.

Mohammad: That’s a tough one, but I’m gonna pull a wild card and say Jordan Griffin. Mark Stoops has named him a backfield starter, so this is his time to shine. While he didn’t show much flashiness last season, he played in 12 of 13 games and showed some potential that will be instrumental in replacing the injured Davonte Robinson. I think he will fare well as a leader.

Chase: Justin Rigg. The tight end had his praises sung by all the coaches all summer, and replacing CJ Conrad isn’t exactly easy. In this case, coaches will express confidence but assure media that gameplans might change or they might utilize that spot less. There’s been none of that, and they’re ready to have Rigg in full-force, so I am too.

After losing so many players from last year, which position on the field has the biggest shoes to fill?

Erika: I’m going with the whole secondary (yes, I realize this is more than one position but it’s important). As I mentioned already, this is Kentucky’s weakest spot heading into this season and the coaching staff is putting a lot of trust into younger players to fill the roles.

Mohammad: I’m gonna have to say the “Jack,” a.k.a. the outside linebacker position. Josh Allen is one of those generational-type players that don’t come around often. I’d like to see how Mark Stoops and Brad White help fill that void. Luckily for them though, they are loaded with a depth of young edge rushers and the versatile Jamar “Boogie” Watson by their side.

Chase: Safety. Losing two of their three best tacklers in Mike Edwards and Darius West is going to hurt so badly. I can’t count on all my fingers and toes how many touchdowns they saved, and if you don’t know why big plays are going all the way now when they didn’t before, remember this Kernel article.