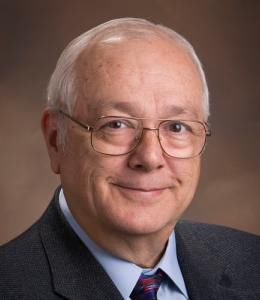 “I think I might go to law school,” I said, and braced myself for Dr. Farrell’s reaction.

On Sept. 4, 2018, Dr. Farrell and I were both guests at a dinner hosted by UK Libraries with Sid Davis, a longtime White House correspondent who had spoken at UK earlier that evening.

Dr. Mike Farrell was then the interim director of the School of Journalism and Media, and I had taken his media law class that spring.

He had said it a million times: Talented journalism majors should not go to law school. Going to law school is abandoning the profession of journalism.

But my mom is a lawyer, and for a brief period last fall, I thought I might follow in her footsteps. I told this to whomever I was sitting next to at this dinner, knowing what Dr. Farrell’s reaction would be if he heard from a few seats down.

He did hear me, and I think his jaw actually dropped as he looked at me in disbelief. I don’t remember exactly what he said, but it was something along the lines of what I had heard him say before.

I do remember, and will always remember, the email he sent me the next morning.

In the hours after we learned the devastating news that Dr. Farrell had passed away, many people took to social media to praise their teacher, colleague, mentor and friend. Scrolling through these heartwarming but heartbreaking posts eventually made me cry.

Then I remembered this email, and I knew it would be something I could read that would make me smile.

On Sept. 5, the morning after he “chastised” me about going to law school, Dr. Farrell sent me this email:

“You do realize this is all an act. It is your life and you have to be happy with it. I didn’t tell my own sons what course they should follow, and I would never tell a student.

Follow your heart and meditate on Prov. 3:5-6. My life has taken many turns but God has been in all of them.”

Proverbs 3:5-6 is a piece of Scripture that many turn to for guidance and wisdom: “Trust in the Lord with all your heart and do not lean on your own understanding. In all your ways acknowledge him, and he will make straight your paths.”

After losing someone like Dr. Farrell, we cannot lean on our own understanding, because we cannot understand why we lost him so soon. He still had children and grandchildren to love. He still had students to teach and colleagues to mentor. And Lord knows he still had government officials to hold accountable.

I’m not going to law school, but if I did, I would think of Dr. Farrell every time I learned something new about Justice Oliver Wendell Holmes or censorship or statutory law. I will think of him every time I read another book about the history of journalism. I will think of him every time I see someone offer someone else a tissue, because there were many times that Dr. Farrell left the classroom unexpectedly just to return with a box of tissues and cough drops for a sniffling student.

Most of all, I know that my classmates and I will think of him every time we practice our First Amendment freedoms as journalists, following in the footsteps of an incredible man and journalist.

And that is truly the best tribute we can give him.