Game-by-game preview for the 2019 football season 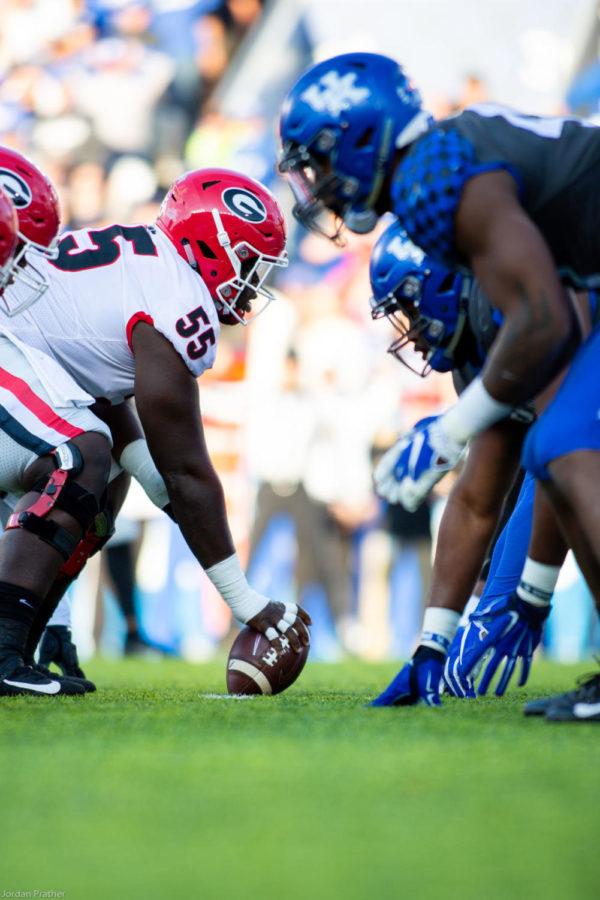 In week one of the long-awaited 2019 football season, the Kentucky Wildcats will face-off against the Toledo Rockets, one of their two Mid-American Conference opponents of the season. The Rockets went 7-6 overall and 5-3 in the MAC in 2018, which included a bowl game against Florida International in the Bahamas.

Despite the winning record, a victory over a school rival and a bowl game, most Rockets fans would consider last season a “down year.” Why? Because a 2017 MAC championship for Toledo set the bar very high for 2018, but an injury-ridden team couldn’t make it happen again. After finishing third in the MAC West last year, Toledo looks to looks to use its re-vamped defense to replicate its Prev

For the first time since 1991, the Wildcats will play two games in a season against Mid-American Conference teams. The first being Toledo, the second being the Eastern Michigan Eagles, who the Cats played just two seasons ago in 2017.

EMU went 7-6 overall and 5-3 in the MAC, however, many of the Eagles’ losses were close ones as five of their six L’s were decided by a touchdown or less. On the defensive side of things, EMU looks to fill a big hole where defensive end Maxx Crosby left—the now-Oakland Raider posted 41 tackles for loss, 20 sacks and eight forced fumbles for the Eagles.

Despite losing 13 starters, EMU returns 13. They lost their starting quarterback, but Mike Glass III looks fill the role as a dual-threat. Last season Glass played in eight games, passing for 1,024 yards and nine touchdowns, gained 412 yards on the ground and added six scores. The last time UK and EMU went head-to-head, the Cats earned a 24-20 victory.

If this year is anything like the last two times the Cats and Gators have played each other, we’re in for a heck of a football game. After a jaw-dropping 28-27 loss to Florida in 2017 and the end to the 31-year losing streak in 2018, what could this year’s game possibly have in store?We’re unsure of that at this point, but we do know that expectations have been set very high for this 2019 Florida Gators team. Leading the pack is returning quarterback Feleipe Franks, a 6-foot-6, dual-threat who threw for 2,457 yards and 24 touchdowns last season when the Gators went 10-3.With a heavy target like senior wideout Van Jefferson, who was Florida’s leader in receptions, yards and touchdowns last season, the Gator offense could be something to reckon with—that is, if the offensive line can bounce back after losing four of its starters.

The Bulldogs are coming off an 8-5 season, one of its losses coming from the Wildcats in one of the best (if not the best) games UK played all season. Joe Moorhead is going into his second year as head coach of Mississippi State and looks to use his offensive-mindedness to lead MSU to a leading spot in the SEC West.

According to the Clarion Ledger, Moorhouse said earlier this month that his offensive line might be one of the biggest he’s ever worked with, which will help pave the way for running backs like Kylin Hill and quarterback Nick Fitzgerald.

A big storyline for the Bulldogs will be whether or not the defense can live up to the standard it set last year, which was one of the best in the country. It gave up only 15 touchdowns in 13 games and held opponents to just 2.9 yards per carry.

Will Muschamp’s squad posted a 7-6 (4-4 SEC) record last year, only losing eight starters and returning 16. The Gamecocks were injury-ridden in 2018 and are tasked with getting their players healthy in order to reach their full potential this year, especially on defense.

South Carolina took a big loss with All-SEC wideout Deebo Samuel moving on to the NFL, but the Gamecocks return their starting quarterback in Jake Bentley. The 6-foot-4, 220-pound senior has the potential to be near the top of almost every school statistical category. His top target is likely to be senior Bryan Edwards, who enters the season ranked fifth in receptions in program history. The Gamecock defense has starters on all three levels—especially the defensive line, returns four seniors.

A quarterback battle has struck the Razorbacks, and it’s the number one question heading into this season. They have several options, one being Ben Hicks, who was the first-team option throughout the spring and has experience from playing at SMU.

Another front-runner is Nick Starkel, also a transfer, whose experience with the offense at Texas A&M may put him a step ahead with Arkansas’ offensive schemes. Last season the Razorbacks posted a rough 2-10 record that included 0-8 in the conference.

To no surprise, the Georgia Bulldogs are expected to be one of the best teams in the country—the AP Preseason Poll has them ranked at No. 3. In one of the most highly anticipated games of Kentucky’s season last year, the Dawgs came to Lexington to compete with the Cats for the SEC East title and won.

Mizzou stood 8-5 last year and was led by Drew Lock, a component of the Tigers’ offense that will be greatly missed. Replacing him is Clemson graduate transfer Kelly Bryant, who is supported by one of the best receivers in the SEC, Johnathon Johnson.

Johnson had 59 catches for 737 yards and five touchdowns last season. Mizzou running back Larry Rountree III will help give the Tigers some balance—he ran for 1,216 yards as a sophomore. Something else to note is that Missouri landed eight players on the 2019 Preseason All-SEC Teams—the fifth-most by any team and the second-most of any SEC East team, trailing only Georgia.

When Kentucky was ranked No. 11 in the country last season, the Volunteers earned a 24-7 win over the Cats in Knoxville, an outcome that not many had predicted. After going 5-7 overall, head coach Jeremy Pruitt heads into his second year at UT with a third-year starting quarterback in Jarrett Guarantano, along with a good amount of returning starters.

The Vols have several position battles going, even though some of those players in their respective positions were freshman All-Americans just a year ago. Competitions at cornerback and punter is something to keep an eye on as the 2019 season starts.

The Cats travel a few hours south this year to take on the Commodores, who are returning 11 starters for the 2019 season. Like several teams on UK’s schedule, there’s a lot of question marks concerning Vandy’s depth chart, especially on defense and at the quarterback position.

Three of their four top linebackers are gone, including their lead tackler, Jordan Griffin. And of course, losing Kyle Shurmur, Vandy’s all-time leading passer (8,865 yards) is a huge loss. But one thing is for sure about this year’s Commodores: Ke’Shawn Vaughn is ready to make some noise. The star running back rushed for 724 yards and seven touchdowns during a four-game stretch late last season in SEC play.

The Skyhawks are coming off a 2-9 season as they head into 2019 and will take on the Wildcats in week 11 of the season, their second SEC matchup on the schedule along with Florida. UT Martin returns 13 starters, including senior defensive lineman Julian Crutchfield. The 6-foot-5, 300 pounder was second team All-OVC last year and totaled 41 tackles and 9 tackles for loss.

Another Skyhawk returner to watch out for is senior Terry Williams, who compiled 67 receptions for 736 yards and three touchdowns last season.

In-state nemesis Louisville and the Cats will go head-to-head on Senior Day this year, Kentucky’s very last regular season game. The Cards are looking for a fresh start with new head coach Scott Satterfield after a 2-10 campaign last season.

Jawon Pass and Malik Cunningham are both weapons at quarterback, both earning starts last season, and are battling for a starting position. On defense, UofL has installed a new 3-4 operation, which will shift some of the returners in new positions.