Robinson’s injury leaves a hole in the defensive backfield. How will UK fill it? 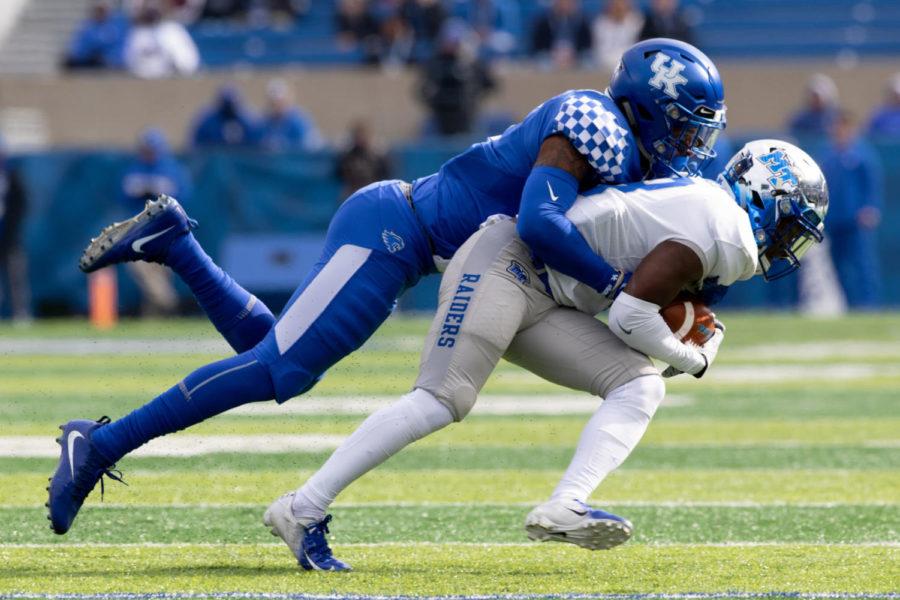 The Kentucky football team came into camp this summer knowing they’d have to replace several productive bodies. Josh Allen, Benny Snell, Lonnie Johnson, Mike Edwards and George Asafo-Adjei were all taken in the most recent NFL Draft, leaving holes all over the field on both sides of the ball.

A hole they didn’t expect to need filled was junior safety Davonte Robinson. Robinson was fresh off a career year, recovering a fumble for the final touchdown against Florida, more than doubling his tackle totals and seeing three starts as a sophomore. It included three tackles for loss from his safety spot, two fumble recoveries and four pass deflections without being a cover man. He was poised to be the unquestioned best defensive back.

Unfortunately, before UK even welcomed reporters in for Media Day, Robinson suffered a quad injury that will sideline him for the entire 2019 season. UK’s young defense gets a whole lot younger.

Because of this, brand new players may be thrust into the fire right away.

Jordan Griffin has been named the starting strong safety for the Cats against Toledo, but defensive starters don’t always play the whole game based on formation. So who are the other candidates for the position?

One is Moses Douglass. Ranked as one of the top 30 recruits at safety in the nation by two different recruiting services, the four-star freshman could very well be asked to log playing time to help the safeties replace Robinson, Edwards and Darius West.

How does he feel about it? Well…

“(We’ve got to) put our big boy pants on, because it’s time to ride,” Douglass said. “I’ve been studying more, getting film sessions with (Robinson), you’ve got to actually talk to him because that’s a big spot to fill. Everyone wants to know what they’re going to do.”

While Douglass acknowledged that Robinson going down hurts the team’s chances to win, he also appreciates the sense of competition that it gave all the other defensive backs.

He recollected himself and started emphasizing caution for the other players, new and old.

“You really don’t think anything’s going to happen until it does. It just opened a lot of our eyes.”

Douglass will be far from the only one competing for a safety spot – Tyrell Aijan, Griffin and Yusuf Corker will be the main competitors for the two main safety positions. Without a second string player clearly above him, though, there’s a serious chance Douglass could see field time as a freshman to help cover for the loss of Robinson.

Looks like it’s time for him to put his “big boy pants on,” as he said.