The $53 million UK law building is open for students 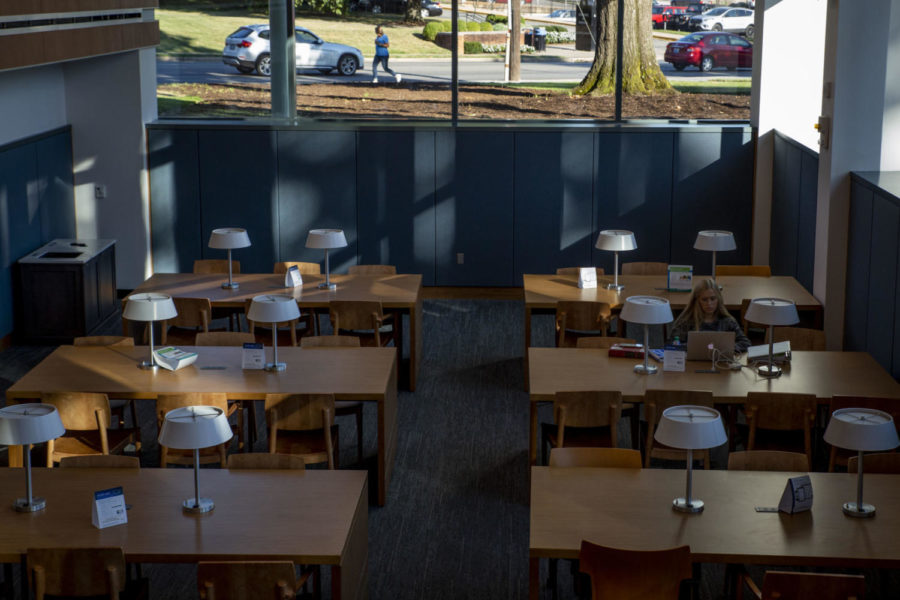 A student studies in the library in the UK Law Building on campus on Friday, September 6, 2019 in Lexington, Kentucky. Photo by Arden Barnes | Staff

University of Kentucky law students now have a new place to call home.

The estimated $53 million UK College of Law building, located beside Memorial Hall and under renovation since the summer 2017, is open, according to the College of Law website.

“The building is state of the art, but we have such a strong bond between faculty, staff and students and it is continuing to grow stronger being able to collaborate in one space together,” third year law student and Student Bar Association President Chyna Hibbitts said.

Classes from the old law building were temporarily relocated to neighboring buildings such as the Lexington Seminary Building, Memorial Hall and at the Gatton College of Business and Economics during this time.

The former College of Law building had been standing since 1965. After being relied upon for over half a century, the building had not grown with changing educational needs of law students, which brought up the conversation of renovation according to the website.

“At UK Law, we pride ourselves on providing a high-quality, yet affordable, legal education that effectively prepares graduates for their professional careers and community leadership and impact,” College of Law Dean and Professor of Law David Brennan said in a letter to students before renovations began.

The new building houses study space, a small courtroom and improved classrooms. The building has open spaces on each floor with classrooms and space for personal lockers. A library is available as well inside the building with seating available for studying.

Along with structural changes, the building now has a Common Grounds coffee shop in it.

There are also currently vending machines in the lower level student lounge, along with the student organization quarters. The lounge is unlocked during the daytime hours—however, law students can access it 24 hours a day with a key swipe. Students have access to a refrigerator and microwave as well in the lounge.

Two terrace spaces are an option for students to be able to enjoy fresh air and gaze over the campus with a view facing Memorial Hall and another facing South Limestone.

Breastfeeding mothers have access to a lactation room and their own fridge to store breastmilk and faculty and staff have respective lounge areas as well.

Being in one college building for most classes is something that can unite a group of students and allow them to know each other, Hibbitts said.

“We are all still learning our way around the building, but the sense of community is already starting to show,” said Hibbitts.

Hibbitts said that without the College of Law building there was limited space to study, classes could be hard to hear and no place was their own. She would hunt down an unused conference room to study in or simply study at home.

“It’s just nice to have our own space again, to know what it’s like to be in a traditional law school, to have a law library,” said Hibbitts.

Some law students stay in the building the majority of a school day studying and resting when time allows between classes.

“For the most part, students are there all day,” said Hibbitts.

Some former students recalled what was known as the “dirty lounge” on the UK College of Law Facebook page posts about the renovations.

“It was the lounge where you could eat, smoke and hang out on couches … it also had tables and vending machines,” said 1992 UK College of Law graduate Laura Hendrix.

The students had distinguished the hang out and eating space as “dirty” while the space reserved for study and quiet was termed “clean.”

“The ‘clean lounge’ was quiet and you didn’t eat or smoke in it. It wasn’t a negative term – just a way to distinguish between the two,” said Hendrix.

After hearing about the changes made, Hendrix said she “would’ve loved a coffee shop” during her time at UK.

Law students can expect to begin occupying the new building this semester.