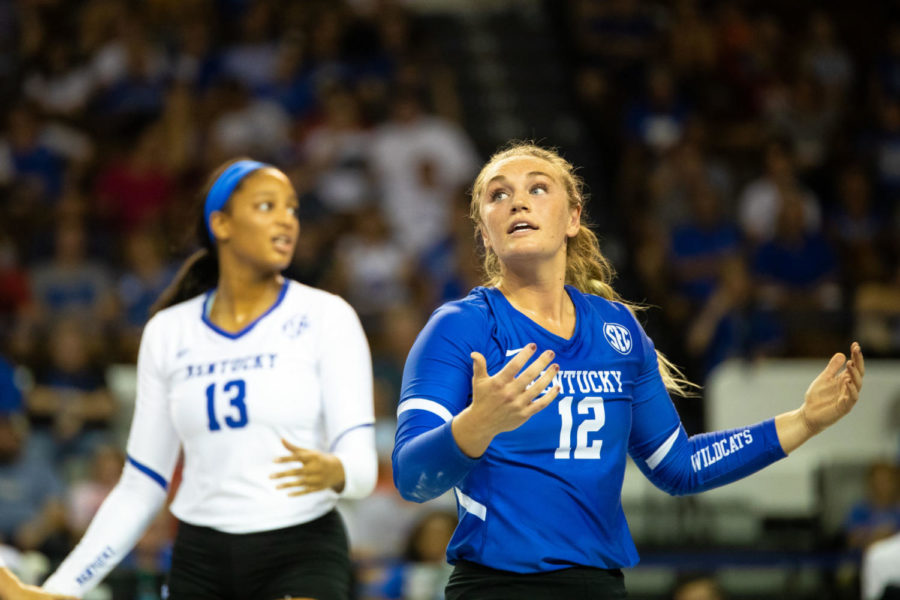 Kentucky junior Gabby Curry disagrees with a call during the game against Florida Gulf Coast University in the Bluegrass Battle on Friday, Sept. 13, 2019, at Memorial Coliseum in Lexington, Kentucky. Kentucky won 3-1. Photo by Jordan Prather | Staff

Heartbreak has been a word that’s circled the University of Kentucky a lot this week, and is a word that describes UK volleyball’s 3-2 loss against No. 21 ranked Purdue. The Cats are now 6-4 on the season after back-to-back losses to Big Ten foes Indiana and now the Boilermakers.

It wasn’t heartbreak through the whole game for the Cats– they had a 2-1 set lead over Purdue as they were controlling the game up to that point. UK head coach Craig Skinner said after the game that his team has a lot to build upon.

“I thought we played really well for a lot of the match… we had plenty of chances,” Skinner said.

“We just gotta be able to sustain it for two to two and a half hours.” The problem for Kentucky was, with the exception of Leah Edmond having a career-high 27 kills, they just could not sustain successful play long enough to rally for the win.

After going up 2-1 sets over the Boilermakers, the Cats started to lose their momentum. They lost a competitive fourth set 25-22 after Purdue went on a 4-0 run out of a time out to close out the set.

Purdue’s momentum kept up as they went on an 8-0 run to start the fifth set, which killed Kentucky’s stride and eventually led to a Boilermaker 15-8 set win to claim victory on the match.

After the game, Skinner summed up the match quite simply.

“Purdue made a lot of really good plays and we didn’t,” Skinner said. “In the fifth set, (Purdue) got kills and blocks when they needed to and served in the right spots. They created their own breaks. We need to do a better opportunity of creating our own opportunities to score points and stop the bleeding when a team gets a few points in a row.”

Kentucky faces another top-25 ranked opponent on Friday against in-state rival Louisville. Skinner talked post-game about how important the team’s fan base is in games like they’ll face against the Cards.

“This team is doing a lot of special things, we just got to get over the hump.”

The Cats will be back in action at Memorial Coliseum Friday against UofL at 8:00. The game will be broadcast on SEC Network.