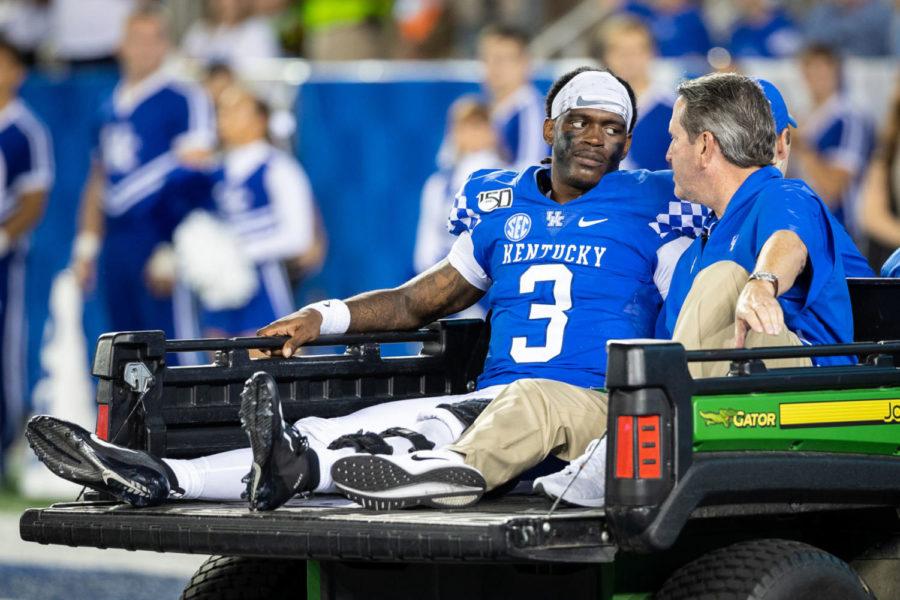 Kentucky Wildcats quarterback Terry Wilson (3) is taken off the field on a cart after suffering a leg injury during the UK vs. Eastern Michigan University football game on Saturday, Sept. 7, 2019, at the University of Kentucky in Lexington, Kentucky. UK won 38-17. Photo by Michael Clubb | Staff

As common as injuries are in sports, there’s still the same amount of shock value each time they happen. Especially when it’s a team’s starting quarterback.

Kentucky football’s Terry Wilson suffered an injury in the third quarter against Eastern Michigan Saturday night after being taken down on an illegal horse collar tackle by the Eagle defense. The nature of the injury has not officially been determined—the only information Kentucky head coach Mark Stoops provided after the game was that Wilson had suffered a left knee injury, and that it obviously didn’t look good.

“Terry! Terry! Terry!” The Kentucky fan base shouted as he was being carted off the field. Wilson returned the love with a point to the crowd.

Now, the common “next man up” mentality had to be carried out, and backup quarterback Sawyer Smith was the man for the job. A transfer from Troy, Smith knew what he needed to do as soon as he saw Wilson leaving the field. While Smith expressed his concern for Wilson and said he never wants to see anyone get hurt, he knew he needed to go out on the field and step up to fill a big role for his team, which is a feeling he says is hard to describe.

“That’s not what you want as a friend or a competitor,” Smith said after the game. “Terry was having a great game, had a really good game last week and was playing well, so to see this happen, you know, I love Terry. You have to do what you have to do. You have to go out there and play.”

Smith indeed did what he had to do, leading the Wildcats on a scoring drive when he went in. His first-ever pass completion was a 54-yard touchdown pass to Ahmad Wagner, which put the Cats up 31-10 early in the fourth quarter. Smith ended on 5-of-9 passing for 76 yards and two touchdowns in his Kentucky debut.

“I think the guys have a lot of confidence in Sawyer,” Stoops said. “Guys feel for Terry because he’s worked hard and he’s a leader on our team. You know, it’s a part of our game, injuries.”

Before his injury, Wilson completed 14-of-26 passes for 114 yards, and also gained 43 yards on the ground on eight carries and a rushing touchdown. Many of Wilson’s teammates described how they felt about Wilson’s injury, one being running back AJ Rose.

“We played hard all four quarters and from the time Terry was in, he managed the game,” Rose said. “He did a good job and the offensive line came to play, and after what happened to Terry, everyone is feeling a little weird and a little sad right now. We are just praying for the best.”

It’s still to be determined how long Smith will be filling Wilson’s shoes, but UK players and coaches alike believe in him, given how much experience he’s had.

“I think that as a backup quarterback, especially at this level of football, you need to have two or three guys that are ready to go,” Smith said. “I think they have confidence in me to keep it going and I think that is how it should be.”