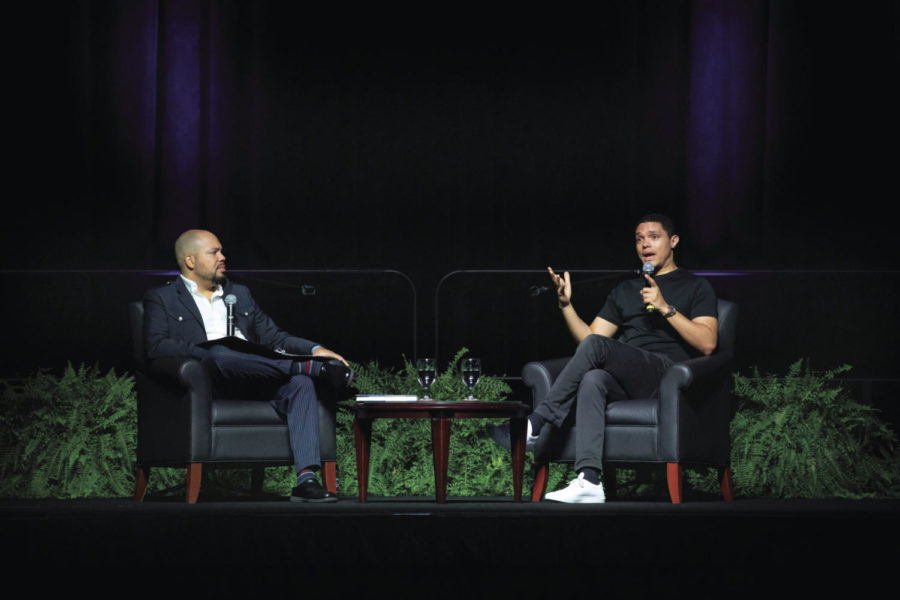 Comedian and author Trevor Noah joins the Dean of the UK College of Education Julian Vasquez Heilig for discussion at Memorial Coliseum on Friday, Aug. 30, 2019. The event commemorates 70 years of integration at UK. Photo by Mark Cornelison | UK Photo

With 70 years of racial integration under its cap, the University of Kentucky is celebrating progress – and potential – on campus this year.

Several events have been planned for UK’s commemoration of 70 years of integration, including film screenings and guest lectures. All events are intended to highlight diversity at large and at UK.

The commemoration kicked off in August with a sold-out event featuring Trevor Noah, comedian, author and host of Comedy Central’s “The Daily Show.” There, Noah discussed educational opportunity and equity.

But many events are still to come. On Oct. 11, the National Pan-Hellenic Council will host a step show in the student center; on Oct. 13, Black Voices Gospel Choir will perform over brunch; on Nov. 6, Swedish film Force Majeure will be played in the Worsham Cinema, followed by a reception; and on Dec. 6, Harvard Professor Sarah Lewis will deliver a lecture on racial bias in photography in the Worsham Cinema.

A complete list of scheduled activities is available on myUK.

The celebration, organized by UK’s Office of Institutional Diversity, is nearly a year in the making. It is the first campus-wide celebration of integration since 1999, the 50th anniversary of Lyman T. Johnson’s enrollment at UK.

In 1949, Johnson, 43, made history when he enrolled at the University of Kentucky as a graduate student. Johnson was able to attend UK after he legally challenged a Kentucky law prohibiting black and white students from attending the same institutions.

Office of Institutional Diversity Vice President Sonja Feist-Price said this anniversary is “an important opportunity for reflection and making plans for a more diverse and inclusive community.”

“The University is making important strides in creating a truly diverse, inclusive campus – what we call a community of belonging,” Feist-Price said. “In recent years, our campus has become more diverse in terms of numbers of students, but we’ve also made progress in terms of retention, graduation rates and student success.”

For proof of progress, Feist-Price pointed to recent accolades like UK’s 2019 Higher Education Excellence in Diversity Award from INSIGHT Into Diversity magazine, which the university has now been awarded three years running.

“But we are not satisfied,” Feist-Price said. “An anniversary like this one serves as an important reminder of our progress, but also what is left to do.”

George Wright, a distinguished alumnus and visiting professor at UK, has witnessed the evolution of inclusivity on campus firsthand. Over the past half a century, Wright has moved to and from UK’s campus in various capacities, including as an undergraduate student in the late ‘60s, a master’s student in the ’70s and a professor in the ‘80s.

Wright said support for black students in 1968 was sparing.

“The metaphor would have been, ‘we’re going to put you out there in deep water when you go to college, and you’re going to sink or swim,’” Wright said. “I don’t think it’s that way now. Now it’s, ‘we’re going to help you be successful in swimming.’”

Wright said that success may come from resources like the MLK Center, which provides social community to students of color.

Wright said the anniversary of racial integration at UK has also led him to reflect upon smaller developments for black life on campus, too – including the simple right to exist quietly at an institution of higher education.

“A lot of times, I’m going somewhere, and nobody is paying any particular attention to me – which is appropriate – and I’m saying, isn’t it amazing that, back then, my mere presence would have been a source of negative attention?” Wright said.

Integration is reciprocally beneficial to UK, according to Feist-Price. Initial arguments for racial integration focused on morality; now, 70 years later, Feist-Price said institutions like UK “recognize that we are stronger and better because of the rich diversity that exists throughout our campus community.”

Wright agreed that diversity helps both UK’s community and its individual students.

“The University of Kentucky has given me virtually every kind of recognition one can give,” Wright said. “I’m appreciative of that, and they ought to be proud of the fact that I’m one of them… Now, I think people would say ‘that’s George Wright’s school, as much as it is anyone’s.’”