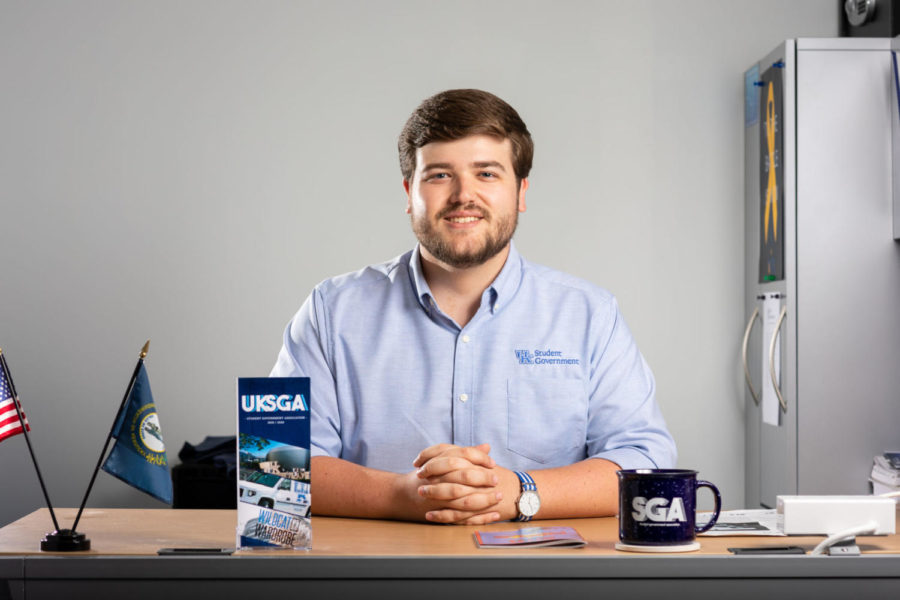 UK SGA President Michael Hamilton poses for a portrait on Wednesday, Sept. 4, 2019, at the SGA office at the University of Kentucky in Lexington, Kentucky. Photo by Michael Clubb | Staff

Michael Hamilton rarely speaks in the first person singular. “We”, “Us” and “Our” permeate his vocabulary, while “I”, “me” and “my” stay hidden in the background.

Hamilton, president of UK’s Student Government Association, is all about the team—his team.

It doesn’t take long to discover this mentality.

He easily rattles off nearly a dozen of his laundry list of mentors and role models. Each one, including former SGA leaders, UK administrators and his fraternity big brother, has had a potent impact on him. It’s a long but short list for Hamilton.

“I love to talk to people. I like to make friends,” Hamilton said while laughing. “I know those sound really basic but they get lost with some leaders. A lot of times when people end up in positions like this, it’s all about the work and what we can get done, but one of the things I have enjoyed most and that I would consider a strength is building those relationships with people across campus.”

For him, it’s what the job is all about. He judges his success based on the relationships he builds, the students he helps and the lives he improves.

One of the top items on Hamilton’s agenda is breaking the glass ceiling.

“Student government hasn’t traditionally been a very representative place on campus,” said Speece. “So when Michael took office for the first term, he was very intentional about making sure that the people serving on our board look like the people walking around campus.”

Tucker Lovett, who has run for president against Hamilton twice, also speaks highly of his inclusion efforts.

“I think Michael has really done a great job of bringing a solid voice for under-represented students here at UK,” Lovett said. “Making sure everyone feels welcome has been the backbone of both his campaigns and I think students really like to hear that.”

However, in Michael’s eyes, he still has a long way to go. During his second term, he is eager to continue chipping at the glass box he believes has historically surrounded student government, especially after last minute write-in candidates Juwan Page and Lidya Azad garnered over 15 percent of the vote in last year’s elections.

“Their campaign reflects that need for us to do that intentional and genuine outreach to students, especially students in marginalized groups on campus,” said Hamilton. “During our first administration we tried to break some of those barriers down, but that campaign was a bright red indicator for us that we can’t rest on anybody’s laurels.”

Hamilton’s goal for the year is to bridge student divides in a way that everyone feels heard.

He will need the talent and expertise of his team to pull it off. Specifically, he is happy to have Chandler Frierson, the Director of Inclusion and Outreach, as a partner in this goal.

Last year, in addition to being a SGA senator, Frierson was one of the founders of the Black Student Advisory Council—one of the groups which occupied the Main Building in protest of how UK has treated minority students.

“It’s a statement of the power that people of historically underrepresented backgrounds can have when we put our minds together,” he told the Kernel last Spring.

This year, Frierson is working with the Hamilton-Speece administration to help them connect to underrepresented students in the way that Page and Azad were able. Frierson declined to comment for this article.

“I think that the write-in campaign has to be commended. I mean, they communicated with students, they struck a chord with communities on campus, we just have to understand that better and grow from it,” said Hamilton. “I’m really excited for the work Chandler and his team have queued up and I hope that it’s a genuine effort to learn more about campus, to learn more about students.”

This effort includes creating more permanent spots for the student voice where decisions are being made at UK. While administrators often call him to be “the student in the room”, Hamilton tries to delegate standing committee and workgroup spots to a representative sample of students.

Speece said he often walks out of meetings with lists of students he wants to put on a panel.

“If he knows he is unaware of a topic he will go out of his way to find students who are personally impacted and find out about their experience to make sure the administration is listening to all voices,” Speece said.

Although he has been a staunch opponent to Hamilton and doesn’t always agree with him, former opponent Lovett said that Hamilton always takes the time to hear differing opinions and thoroughly considers them before making a decision. That hasn’t changed his second term.

“He has assembled a diverse team that works well with one another,” said Lovett. “I think there are lots of great things in store for SGA this year.”

Hamilton’s willingness to listen goes beyond the job. He regularly has “friendship meals” with his team, scheduling time to take a break from the work to talk about life and enjoy each other’s presence.

“You feel like you can always be a friend of his. He gets to know all of his team members as people, as students, not just as ‘Director of X’,” said Speece.

Speece met Hamilton freshman year when they participated in SGA’s Leadership Development Program together. They both ran for freshman Senate—Hamilton got it, Speece didn’t. But there are no hard feelings, she said.

During Michael’s first term as president, Speece was working as Director of Government Relations and Civic Engagement. The pair quickly realized their leadership styles and work ethic complimented each other, and so when the time came for elections, they ran on the same ticket.

“I think one of the main things I’ve learned from Michael is empathy,” Speece said. “He always puts the person first. That’s really affected the way I see others—I’m learning how to give more grace.”

Hamilton’s grace is accompanied by a drive for constant improvement. He said that during his second term he has a lot more he wants to accomplish.

“I think in the first term—and any president will tell you this—there’s just an almost unsurmountable learning curve,” said Hamilton. “You really spend the first half of your year learning about your job and how different things operate and building relationships. And so a lot of people really only get a few months of serving as an effective president.”

Throughout his first year, Hamilton built relationships with administrators, student leaders and other important people on campus. His main objective was to create a stronger SGA presence among the student body, despite a historical connotation that student government didn’t need to focus on outreach or putting on events.

“We were to stay in our office, do our work, advocate for students and that was it,” said Hamilton. “But I think what got lost in that was the connection to campus.”

Hamilton vowed to change the narrative. With each event his team organized, they pinned a new poster to the SGA conference room wall. The wall, inundated with flyers, is representative of their intentional effort.

“It marked a shift in student government that I think was desperately needed,” said Hamilton.

However, he is nowhere near satisfied. Now that his team has built a network of relationships and created a surface-level interaction with students, Hamilton said he’s eager to be an effective and efficient leader from day one.

“This year our mantra is going to be really intentional outreach,” said Hamilton. “In the past, we’ve had this idea that if students are concerned, they’ll come to us. But we’ve realized that students are sometimes intimidated.”

So instead of waiting for students to come to meetings and visit their office in the Student Center of their own accord, this year’s student government will meet people where they already are.

“Now, I think a lot of students see us as that starting point for if they have a problem or concern,” he said. “But I want them to be comfortable walking into the office and saying, ‘Hey, I’ve got five minutes—I need to talk about something.’”

Hamilton didn’t always know he wanted to be a part of student government—he wasn’t even sure he wanted to run for a second time. But when someone recently asked him what he liked to do outside of SGA, a realization hit.

“It’s weird. I didn’t have an answer,” said Hamilton. “When you’re in spaces like this and you have jobs like this, for me—and this is when you know you’re supposed to be in the work you do—it becomes what you’re anxious to do, what you’re looking forward to do.”

Now, he is considering making university leadership part of his post-undergraduate future. He had always thought he would pursue a law degree, but the advocacy, networking and work of higher education has caused him to re-evaluate his plans.

“You have the ability to make change and improve the lives of the people who call your university home with the stroke of a pen,” Hamilton said. “It’s been rewarding for me to watch that and so it’s hard to count it out as something I want to do with my future.”