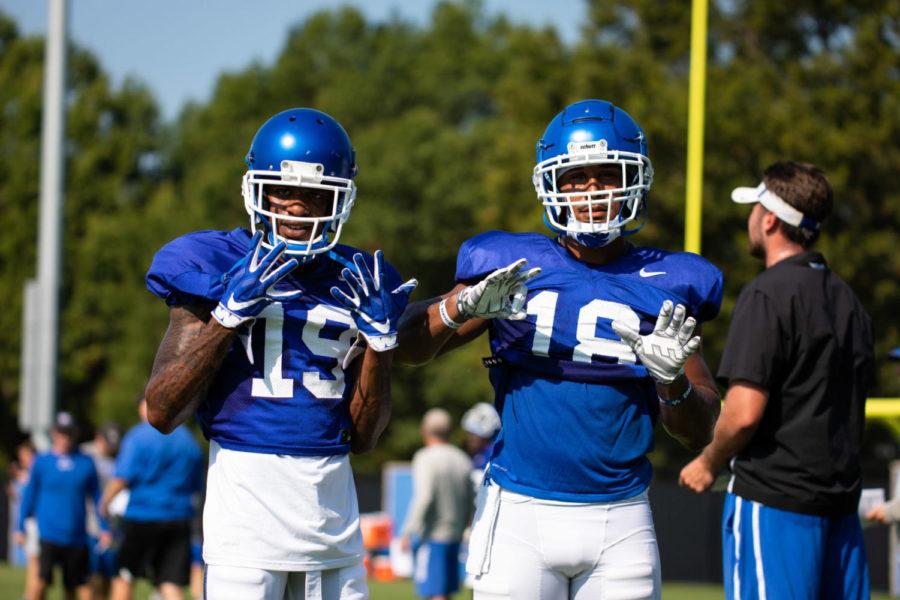 Hoping to avoid a 2-3 start on the year, the UK football team knows they’re facing a critical road test against the South Carolina Gamecocks this weekend. Select players and coaches met with the media on Wednesday evening to discuss how they’ve been trying to move on from last weekend’s letdown in Starkville, MS.

The Cats’ defense gave up 421 total yards on offense against the Mississippi State Bulldogs last Saturday, which was due in part to the mobility of quarterback Garrett Schrader and running back Kylin Hill. Both players combined for 265 yards rushing as Hill had three rushing touchdowns.

Defensive coordinator Brad White talked about executing and finishing plays in order to be successful this weekend. He took responsibility for a “lack” of execution, saying that “it was on me,” but affirmed that his defensive corps would turnaround.

Defensive back Brandin Echols, a bright spot in the Cats’ secondary, was also self-critical after practice. He says that he didn’t have a “perfect game” against the Bulldogs but added that he’s been trying to improve.

“I’m making good plays, but it’s not surpassing my mistakes. I got really bad eyes and I got to work on my technique at the line,” Echols said. “Every week I try to work on one thing at a time. I feel like I’m getting better and better. I just need to focus.”

Linebacker DeAndre Square had a day last Saturday with nine tackles, 1.5 for loss and a sack along with a forced fumble. Square, who has been the Cats’ leader in tackles and sacks this season with 31 and 1.5, respectively, showed little doubt and full confidence in his fellow troops.

“We got to start fast and be physical. We have to bring our identity. We know we can do it,” Square said. “If we give up a touchdown, we have to take one back and help our offense.”

Quarterback Sawyer Smith had a rough day against the Bulldogs. After throwing a pick six in his first drive, he finished with a dismal 36.6 completion percentage and no touchdowns while getting hit hard in the process. Smith reassured the media that he felt good for this weekend.

“I was just a little sore. I feel fine. I just had to get a little ice. I’m good to go this week,” Smith said. “I think this team is very hungry. We’re hungry. Everyone is very hungry. We were very up today with good spirits. It was a good practice.”

As the Cats have done, they practiced with a simulation of the Gamecocks’ deafening crowd noise. The noise could be ringing in their heads as they hit the field this Saturday.