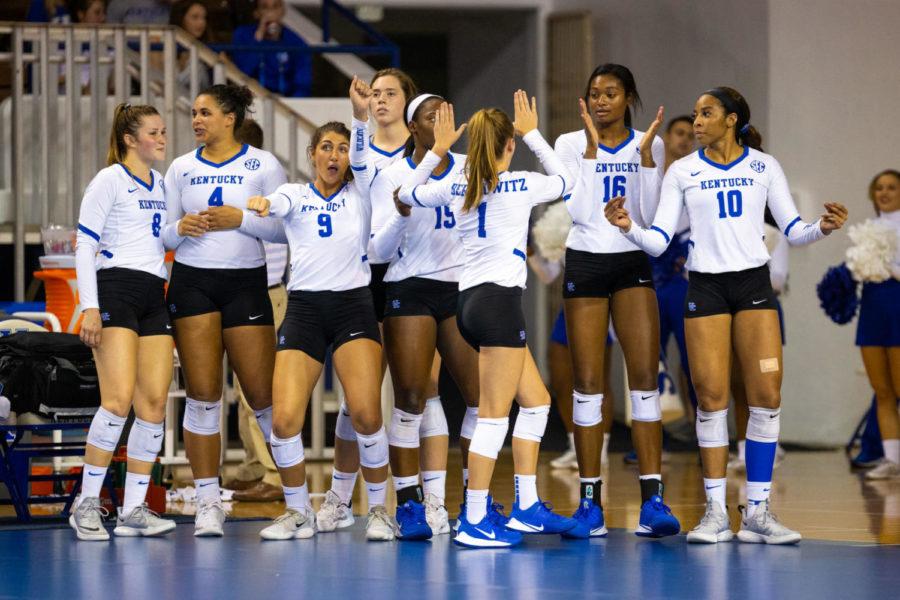 The Kentucky volleyball team dances during a break in the game against Louisville on Friday, Sept. 20, 2019, at Memorial Coliseum in Lexington, Kentucky. Kentucky won 3-0. Photo by Jordan Prather | Staff

No. 16 ranked Kentucky volleyball (7-4, 0-0 SEC), fresh off a 3-0 sweep of rival Louisville, will open conference play against the Mississippi State Bulldogs (11-1, 0-0 SEC) tomorrow night at Memorial Coliseum. The Cats are going for their 12th straight win, the last four being sweeps, and 24 out of 25 wins against the Bulldogs.

The records are a little misleading as Mississippi State is yet to play a Power Five opponent, with the Bulldogs’ solo loss being against Stetson University. UK, meanwhile despite having four losses, has played four ranked opponents and five Power Five opponents, including a win last Friday against then-ranked No. 23 Louisville.

Kentucky struggled to find balance all throughout non-conference play. They are hitting .236 and have primarily been driven through senior outside hitter Leah Edmond. Edmond is averaging 4.54 kills per set. But, the Cats found that balance against Louisville as they finished that game with a .347 hitting percentage. Three players had nine or more kills in what Cats’ head coach Coach Craig Skinner called the “most spirited effort the team has had yet.”

MSU is coming off a 3-2 set victory over the Alabama-Birmingham Blazers, out-blocking UAB 14-4 and scoring 59 kills on the match. They primarily play through their middle blockers like Gabby Waden, a 5-foot-10 sophomore averaging a .363 hit percentage and 3.74 kills per set, and Amarrah Cooks, a 5-foot-11 senior averaging a .346 hit percentage and contributing 50 blocks in total on the year.

Controlling the net will be a big factor in the match. The Bulldogs have had the size advantage over their opponents all year, as they have out-blocked opposing teams 127-65. However, they face a different animal when it comes to Kentucky. The Cats have four key players who stand at least 6-foot-1 and have much more length. They also have a hitting machine in Edmond who will be tough for the Bulldogs to stop, so trying to slow down the Cats’ attack could be the key.

Mississippi State has not had a winning record since 2015. Tomorrow night will test for both teams as the Cats seek to maintain momentum.