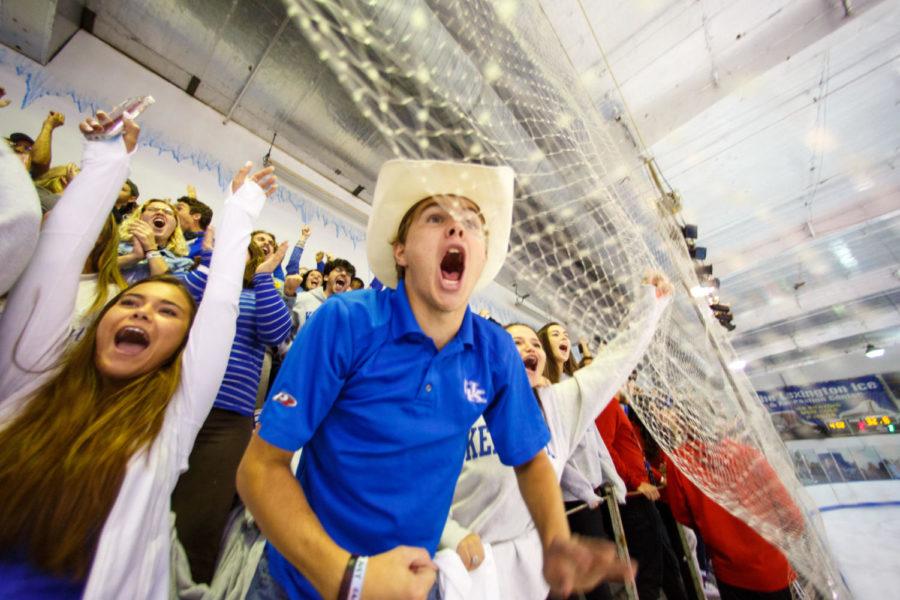 Fans cheer after a goal is scored during Kentucky Hockey's game against Louisville early in the morning on Saturday, Sept. 22, 2018 at the Lexington Ice Center in Lexington, Kentucky. Photo by Jordan Prather | Staff

“Midnight Mayhem,” the greatest weekend nights of the year for UK Hockey fans, are about to return to Lexington.

This year, UK Hockey will ice both a Division II and Division III team that will compete in the National Club Hockey championships. Pergram said that he hopes fans of the sport will show up to the team’s famed midnight puck drops at the Lexington Ice Center and continue to make the games as special as they have been.

After dropping their season opener in Dayton on Friday, Sept. 20, the team made up of young, big and fast players will have a lot for which to make up.

“We have a very tough schedule this year,” Pergram said. “The teams we play have very good programs. Louisville, Indiana, Texas A&M… our guys are going to get a wake-up call early on this year.”

Over the past few seasons, the coaching staff has learned that good players and athletic talent are not what makes a hockey team successful, Pergram said. He emphasized the importance of fan attendance and involvement behind the glass.

“The fans make the game, totally,” Pergram said. “This year we are going to try to do more for the fans. We know how much everyone loves our jerseys, so we’re going to be giving a few of those away. The atmosphere in the stands completely changes the game. That’s why home games are so different.”

Before leaving for Dayton, Pergram acknowledged how the absence of UK Hockey fans in the stands would discourage and intimidate the players.

The team has adopted the Big Blue Nation from the NCAA UK Athletics programs. Even though ice hockey is not an official varsity sport for UK, Pergram believes it serves an important purpose in the lives of the student athletes.

“There’s not a lot of opportunities for people to play hockey around here, and I want to create those opportunities,” Pergram said. “That’s how we came up with the Division II and Division III teams. And within the next five years, it’s our goal to have a women’s team. A lot of girls want to play hockey, and the last thing I’m going to do before retiring from this is giving them the opportunity.”

The current team members are eager to grow as students, athletes and people through what they hope to be a historic season for UK Hockey. They believe that as long as their fans continue supporting them at Midnight Mayhem, their goals are within reach.

UK Hockey’s first home game will be against the University of Alabama-Birmingham on Friday, Oct. 4 at 11:55 p.m. at the Lexington Ice Center.