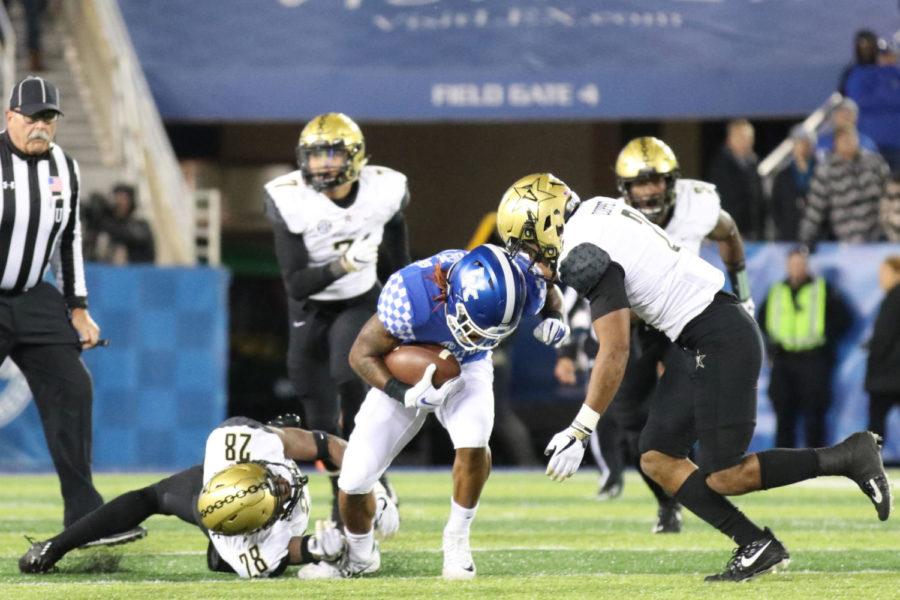 Lynn Bowden Jr. attempts to break a tackle during the game Vanderbilt on Saturday, October 20, 2018 in Lexington, Ky. Photo by Chase Phillips | Staff

Kentucky football (4-5, 2-5 SEC) heads down to Tennessee this weekend for its final road and conference game of the season against Vanderbilt (2-7, 1-5 SEC). The Commodores have not performed at the level that helped them finish last season at .500, but any game in the SEC is not one that can be taken for granted. Here’s what you need to know about Vandy:

Derek Mason is in his sixth season as the head coach of the Commodores, following current Penn State coach James Franklin’s three-year stint. He has amassed a 26-45 record over his tenure, leading the school to an Independence Bowl appearance in 2016 and a Texas Bowl appearance last year.

Riley Neal is expected to be the starting quarterback after missing last week’s contest against Florida with a concussion. He started the first six games of the season before being replaced by Mo Hasan against Missouri, but returned to action against the Tigers when Hasan left that game with a concussion of his own. The Ball State transfer has just under 1,200 passing yards with six passing touchdowns on the season.

With Hasan still in concussion protocol, Deuce Wallace is set as the backup. He has yet to throw a touchdown pass and has four interceptions in limited action.

A major threat on the Commodore offense is running back Ke’Shawn Vaughn, a senior who has suited up for his hometown school his entire career. He has scored six touchdowns on the ground while averaging about five yards per carry, and has the second-most receptions on the team. White and his players know that in order to win, limiting Vaughn’s impact will be key.

“He can take it to the house at any moment,” he said. “He’s compact, he’s hard to tackle… we gotta do a great job of gang tackling.”

When Vaughn needs a breather, freshman Keyon Brooks will get snaps. He is second to Vaughn in carries, picks up 4.5 yards per rush and has the only other rushing touchdown for Vandy.

On the outside, receivers Kalija Lipscomb and Cam Johnson are the duo to watch. They’ve combined for 55 catches and five of the seven receiving touchdowns the team has.

Linebacker Dimitri Moore has racked up 71 tackles to pace the team, followed by safety Dashaun Jerkins with 53. Fellow safety Tae Daley has three of the unit’s five interceptions, and will anchor the back end of the secondary.

Andre Mintze, another linebacker, leads the team with four sacks. The only other players with multiple sacks are defensive back Allan George and linebacker Elijah McAllister, who both have two. The Commodores have 13 total sacks on the season.

Kickoff between Kentucky and Vanderbilt at Vanderbilt Stadium is set for 3:30 p.m ET. The game can be seen on the SEC Network and the ESPN app.