Hagans, Richards step up for shorthanded Cats in win over Utah Valley 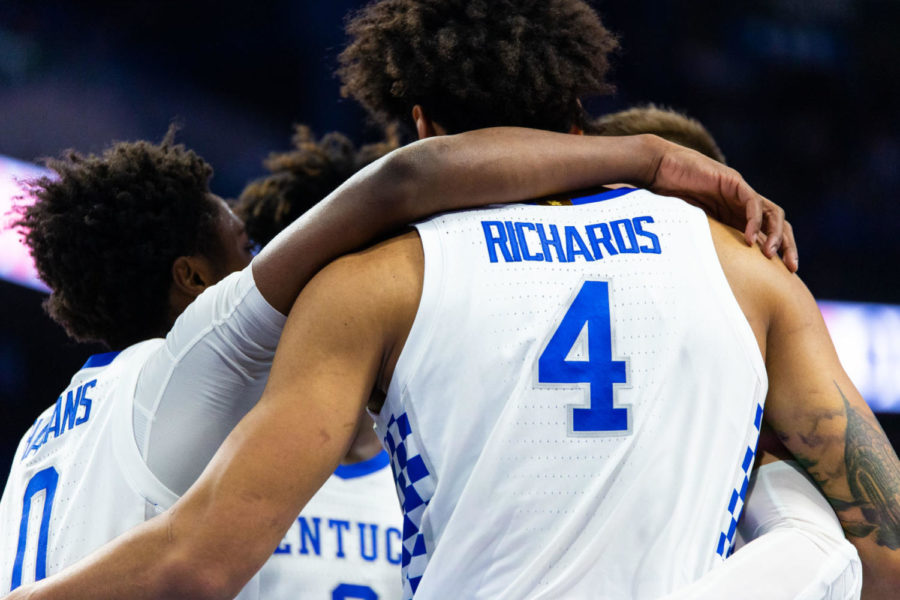 No Immanuel Quickley or E.J Montgomery? No problem.

Down to just seven scholarship players, the Kentucky men’s basketball team (3-1) got some critical help from Nick Richards and Ashton Hagans on Monday night as the Wildcats held onto a tight 82-74 win over the Utah Valley Wolverines (3-2) at Rupp Arena after coming off a stunning upset loss to the Evansville Purple Aces just last week.

The duo came up big when it mattered. Hagans led the way in scoring with a career-high 26 points after scoring just a measly three points in the Evansville loss. He also added five boards and six assists. Richards on the other hand had a bounce-back performance himself, finishing with a 21-point, 10-rebound double-double – just the third in this career yet his second in three games this season.

Hagans’ numbers are remarkable given his condition entering Monday. His subpar performance last week was due in part to some leg pain he suffered during last week’s loss. He seemed to shake it off against the Wolverines, but UK head coach John Calipari said that while nothing came easy for Hagans, Calipari wasn’t surprised.

“He’s probably going to be in pain tomorrow, but there was never a doubt in my mind who I was putting on that line for those technicals. Never. Coaches said, ‘Bup, bup, stop. Ashton, you’re shooting.’” Calipari said.

Those shots that Calipari is talking about came with 5:54 left in the game after Utah Valley’s T.J Washington received a Class A technical foul. Hagans drained both to give the Cats a 64-58 lead, helping stave off the upset-hungry Wolverines. Free throws seemed to look easy to Hagans as he finished with a perfect 12-for-12 show at the line, all while not committing any fouls himself. He’s only the 15th player in school history to go perfect at the line with at least that many attempts.

Those free throws came at the right time too as he was 10-for-10 from the line in the second half. Six of those free throws came within the game’s final minute to ice the victory. When asked about his condition after playing for just over 36 minutes, Hagans said that “it’s all good” and that he will continue to receive treatment on his legs. Nothing changed preparation wise though.

“I’m staying focused and shooting in the gym when I get the chance and, you know, attacking the basket. If my teammates are open, I’ll get them some open shots,” Hagans said.

“That’s the Nick [Richards] that we need. He’s just got to keep on bringing it. But you know, Cal just kept telling us to feed him and let him shoot the jumper.”

Once that plan was in fruition, the Cats got out what they put in with the big man. Richards started off with a hot hand, leading the Cats in scoring at the end of the first half with 11 points.  One minute he made well-executed jumpers in and out of the paint and the next minute he mercilessly slammed over opposing defenders. He maintained that aggressiveness into the game waning moments with several contested shots in the paint along with a perfect 5-for-5 free throw stat line. Four of his 10 boards came from the offensive glass. Calipari was so impressed that he made sure reporters knew after the game.

“But what you’re finding out, Nick, may be not a three-point shooter, but he may be, are you ready for this, folks? Our best shooter,” Calipari said.

But, out of humility, Richards didn’t buy that.

“Don’t listen to him,” Richards said as he cracked a slight grin. “Coach [Calipari] has this chart. It basically shows how many times you attempted an offensive rebound because, you know, those were low for us against Evansville. Offensive rebounding is something we needed to do tonight.”

Richards got some help on the boards from Nate Sestina. Sestina finished the night with a team-high 12 rebounds – the most any Wildcat has had so far this season – as UK out-rebounded Utah Valley 46-27. Tyrese Maxey, playing in his first-ever start as a Wildcat in lieu of Quickley, chipped in 14 points, five rebounds and four assists for some insurance.

The Cats will hit the hardwood once more back at Rupp this coming Friday, Nov. 22 against the Mount St. Marys (Md) Mountaineers at 7 p.m as they hope to keep putting the Evansville-upset in the past.