Kentucky forwards have big day in win over Fairleigh Dickinson 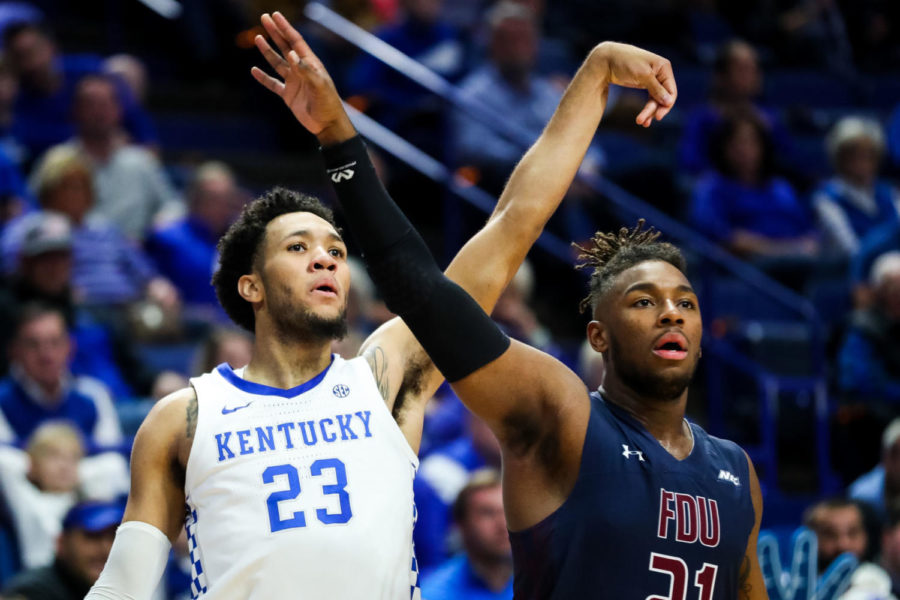 The No. 8 ranked Kentucky men’s basketball team had not one, not two but three double-digit scoring forwards in EJ Montgomery, Nick Richards and Keion Brooks as the Cats defeated the Fairleigh Dickinson Knights, 83-52, at Rupp Arena on Saturday evening.

Montgomery headlined the big men with his second straight career-high scoring mark of 25 points. He started his second straight game after Nate Sestina was sidelined for the foreseeable future with a wrist injury. Montgomery also came up with nine critical rebounds, just one short of what would’ve been his first double-double performance this year.

“My mindset was just come into the game was just, you know, felt like that ‘this is my game. Just go out there and show what I do,’” Montgomery said. “After I made my first shot, I just felt comfortable out there and tried to compete. We just all went out there and fought.”

After scoring six of UK’s first 18 points, Montgomery continued to challenge the Knights’ defense and finished the first half with 14 points. He was nearly just as sleek in the second, shooting 83 percent from the field in the half and making 12-of-16 field goals overall. No Wildcat has attempted that many shots since Shai Gilgeous-Alexander did back in 2018.

In just 16 minutes played off the bench, Brooks had a coming-out performance of his own. He finished the night with 15 points and shot just over 50 percent from the field. After a quiet start in the first half with just four points, he came out attacking in the paint after halftime and even drained a three-pointer.

The freshman’s 15 points are also a new career-high in just short eight games at Kentucky. That marked his best performance since dropping 11 against EKU last month.

“I just always do my own work. I’m always in the gym getting better. Like Coach Cal says, ‘Just because you work for a little bit, doesn’t mean the next time you come out you’re gonna break through,’” Brooks said. “I knew that, eventually, with the game today, I kind of broke through. I seen the ball coming through and I played really well.”

Last but not least, Richards continued his dominant theatrics as of late with a 12-point, 10-rebound performance for his fourth double-double on the season. Saturday’s game marks the fifth straight time that Richards has scored in double digits. He’s now both UK’s leading scorer and rebounder on the year with 14.0 points-per-game and 8.5 rebounds-per-game.

Despite Richards’ resurgent dominance, Calipari said that he didn’t feel that Richards played “particularly well,” saying that he told Richards that “he got arrogant.”

“You start getting arrogant and what happens is all the — he’s [Richards] invested in his positive, his own self-esteem. He invested in it and it can be taken away, not by me but by himself, and reverting back and playing in a way that you played a year ago when I couldn’t keep you in games,” Calipari said.

“Even at the end of the game, we didn’t finish the way I want.”

Calipari may have had his constructive criticisms, but FDU head coach Greg Ferenda says he was certainly impressed with what he saw from his opponent. While his Knights were down throughout the entire match, the way UK’s big men played caught his attention.

“It was a Kentucky festival today. It was a Christmas parade downtown. I lived in Independence, KY for a year, so I know what Kentucky basketball is,” Ferenda said. “It was a coming out party [for Montgomery].”

The Cats (7-1) will ride their five-game winning streak into next Saturday when they take on the Georgia Tech Yellow Jackets back at Rupp Arena at 5 p.m. That will be their last matchup before heading out west to Las Vegas to take on the Utah Utes and then later the Ohio State Buckeyes in the CBS Sports Classic.