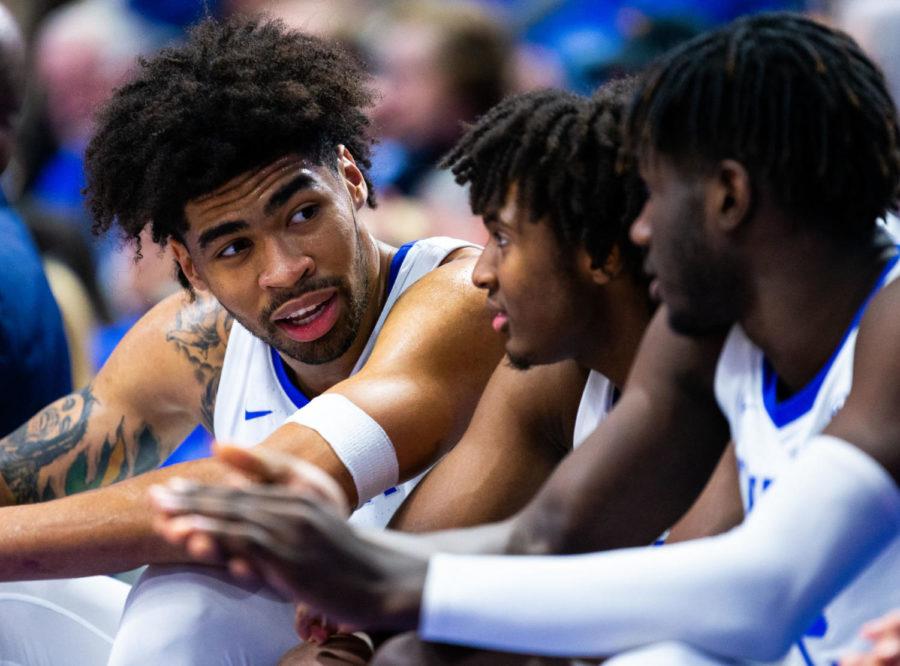 Kentucky junior forward Nick Richards talks with teammates on the bench during the game against Missouri on Saturday, Jan. 4, 2020, at Rupp Arena in Lexington, Kentucky. Kentucky won 71-59. Photo by Jordan Prather | Staff

Just when you think you’re out, they pull you back in.

No. 10 Kentucky appeared to have turned a corner after four straight victories, but fell to lowly South Carolina 81-78 on a buzzer-beating three from Gamecock guard Jermaine Couisnard. Here are some key statistics from the loss:

20-10: The margin for South Carolina in offensive rebounds. It is the second straight game the Cats were at a big disadvantage in the category, as Alabama outgunned them 16-10 on Saturday. This was a major factor in the Gameocks getting 19 more shot attempts than the Cats.

42-41: South Carolina’s overall rebound advantage. It’s only slight, but not winning on the glass has doomed Kentucky throughout the season. When they record more rebounds than the opponent, the Cats are 10-0. They are 2-1 when they tie, and now 0-3 when they have less.

71.4: Kentucky’s free-throw percentage. Over the last three games, the team has shot just 42 of 67 (62.7%) from the charity stripe. What was a strength over the non-conference portion of the schedule has been a weakness to this point in conference play.

56: Number of points the Gamecocks scored – as well as their approximate field goal and three-point percentage – in the final twenty minutes. A fantastic first-half defensive performance was wasted by a Swiss-cheese second, and after nearly blowing a 15-point margin against the Crimson Tide last time out, Kentucky successfully lost a 14-point one this evening.

Couisnard powered South Carolina (9-7, 1-2 SEC) to its first win of 2020 with his season-high and a game-high 26 points by connecting on four of five three-pointers, including the half-court game-winner. His previous top point total was 16 against both Gardner-Webb and Massachusetts. Leading scorers A.J. Lawson and Maik Kotsar were held to just five points combined. The win stopped a three-game skid.

The Gamecocks will look to build on their momentum on Saturday at Texas A&M. Kentucky aims to rebound – both literally and figuratively – on the road at Arkansas, who is 13-2. The game is Saturday afternoon with tip set for 4:00 p.m. EST. Viewers can watch on ESPN and the ESPN app.