Richards’ big first half a key in Missouri win 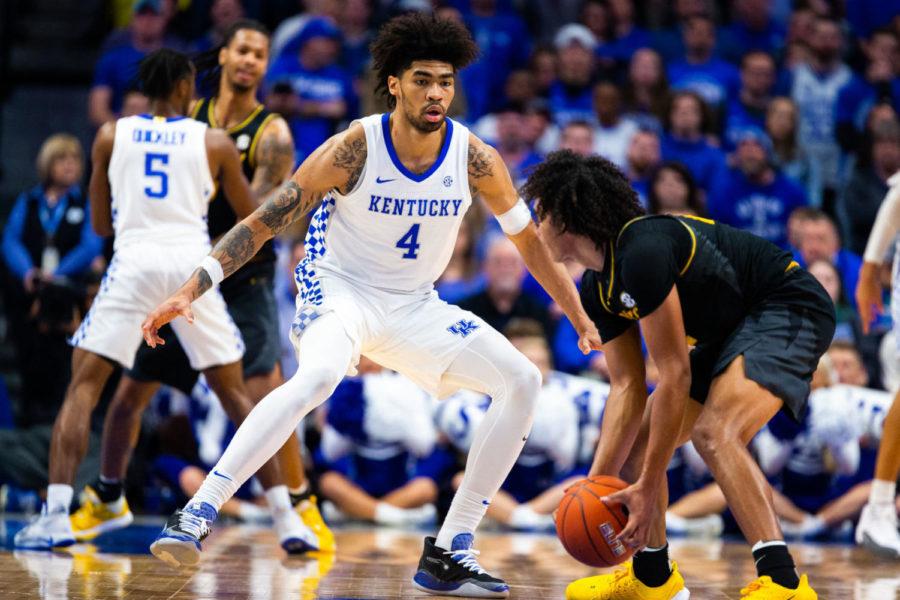 Kentucky junior forward Nick Richards sets up on defense during the game against Missouri on Saturday, Jan. 4, 2020, at Rupp Arena in Lexington, Kentucky. Kentucky won 71-59. Photo by Jordan Prather | Staff

For the opening portion of Kentucky’s conference opener, the team was a dazzling one-man show. Nick Richards played the starring role, scoring 14 of the Cats’ first 16 points en route to his sixth double-double of the season and a 71-59 victory over Missouri.

Richards’ first half was dominant, and the stat-line reflected it: 17 points, eight rebounds and three blocks on 7-of-10 shooting in 18 minutes. He finished with 21 points, 12 rebounds and four blocks.

“I think he was a difference maker in the game,” Missouri coach Cuonzo Martin said. “He did a great job… he’s a much-improved big guy, to his credit.”

He flashed from multiple areas on the court, pouring in jump shots when defenders gave him space finishing two and-one opportunities in the paint.

“Our game plan was that we just had to keep him out of the paint,” Tiger forward Reed Nikko said. “He was hitting jump shots that we weren’t ready for.”

Richards told reporters he has been working on stretching his shooting range, and that the work on his jumper is bearing fruit.

“We take hundreds of those shots everyday in practice,” he said. “It’s a shot I’m comfortable taking now. Just trying to get better at it every day, and hopefully extend it to the three-point arc.”

He didn’t play a huge role in the second half, contributing just four points and four rebounds, but did provide some energy when it appeared the Tigers were poised to climb back into the game.

The biggest story of his second half concerned the number five. As in five personal fouls – including a technical – the last of which sent him to the bench for the final 3:52. His absence didn’t hinder Kentucky down the stretch today, but coach John Calipari knows it could in the future.

“Why would you get in a back and forth with another player when you’re playing that well?” he asked. “So, he hasn’t come through all the way.”

“He doesn’t have the composure because he’s never been this guy… but he did great. I’m proud of him.”