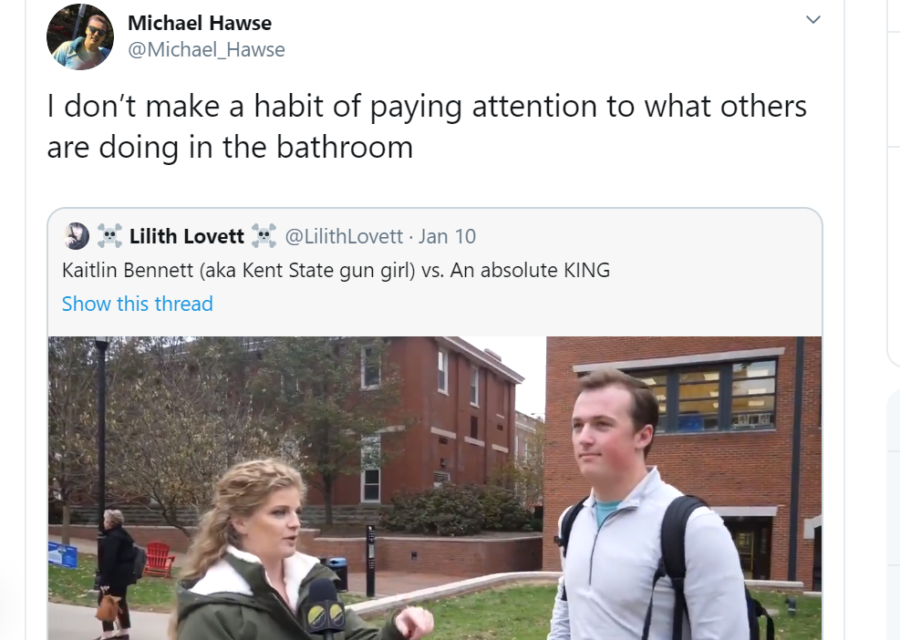 On Jan. 10, Twitter user @LilithLovett posted the video of Michael Hawse being interviewed by Kaitlin Bennett on UK's campus just outside of White Hall Classroom Building.

In a recent viral video, UK sophomore Michael Hawse has been praised on Twitter for an interview he had with Kaitlin Bennett, also known as the Kent State “gun girl.”

On Jan. 10, Twitter user @LilithLovett posted the video of Hawse being interviewed by Bennett on UK’s campus just outside of White Hall classroom Building. In the video, Bennett is asking Hawse what he thinks of a urinal being put in a women’s restroom for “women who have penises,” and putting tampons and pads in men’s restrooms for “men who have periods.”

“I think people are just making too big of a f*****g deal about it,” he said in the interview.

As Bennett pushed, Hawse continued throughout the interview with the stance that people should not be worried about others’ life choices.

“I care about people’s personal rights. They can do whatever they want, it’s none of my business,” Hawse said in the video.

The video has now been viewed over 21.5 million times, with over 610,000 likes. Hawse has since replied to Lilith Lovett’s original Tweet to say he “doesn’t make a habit of paying attention to what others are doing in the bathroom.”

Though the video surfaced in January, Hawse was originally interviewed by Bennett in November. Hawse said he was surprised the video has gained so much attention since then, as the interview happened months ago.

Bennett gained notoriety in May 2018 when she posted a graduation photo of herself at Kent State University posing with an AR-10 with the caption, “Come and take it.” Since then, she has made a name of herself as a conservative guns rights and anti-abortion activist on social media.

Hawse said it is important to remember that he does not “begrudge” Bennett in any way, but instead said there is enough anger in society today. He said people who “make a living stoking the flames of anger that we already have,” just simply do not advance goals.

“If she really cared about the University of Kentucky, she would have asked about the mental health crisis that we are trying to fix here at UK,” Hawse said. “They talk about how students will go home to their apartments or their dorms at night and they don’t have access to enough food… I think just stoking issues that just make people angry with one another are simply not beneficial to this university.”

Hawse said he believes there is a serious need for people to do serious work in journalism to “overcome challenges, challenges that we face at this university especially.”

Instead of simply accepting his newfound viral status, Hawse has used it to raise money for the DanceBlue Golden Matrix fund. Under the viral tweet, he posted a link to a Venmo account being used to raise funds for the annual event that raises money for pediatric cancer research. Hawse said he has raised over $750 since he posted the link.